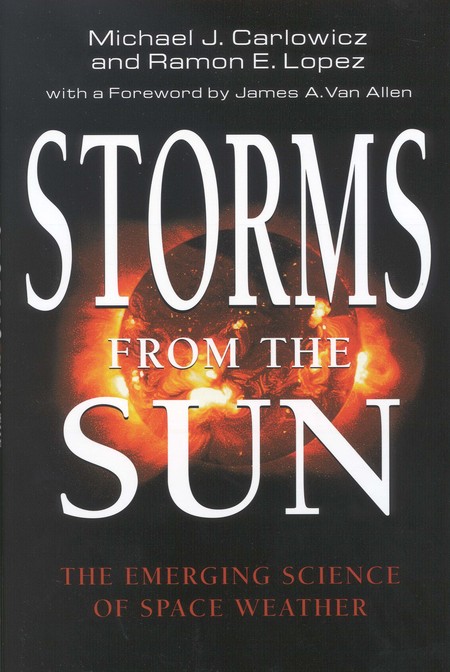 Storms from the Sun

The Emerging Science of Space Weather (2002)

From the casual conversation starter to the 24-hour cable channels and Web sites devoted exclusively to the subject, everyone talks about weather. There's even weather in space and it's causing major upsets to our modern technological world.

Space weather is all around us. There are no nightly news reports on space weather (yet), but we're rapidly developing the tools necessary to measure and observe trends in cosmic meteorology. New probes are going on-line that help us monitor the weather taking place miles above the Earth.

But why does space weather matter? It doesn't affect whether we bring an umbrella to work or require us to monitor early school closings. It's far, far away and of little concern to us . . . right? March 13, 1989. The Department of Defense tracking system that keeps tabs on 8,000 objects orbiting Earth suddenly loses track of 1,300 of them. In New Jersey, a $10 million transformer is burned up by a surge of extra current in the power lines. Shocks to a power station in Quebec leave 6 million people without electricity. New England power stations struggle to keep their power grid up. Listeners tuning in to their local stations in Minnesota hear the broadcasts of the California Highway Patrol. Residents of Florida, Mexico, and the Grand Cayman Islands see glowing curtains of light in the sky.

All of these bizarre, and seemingly unconnected, events were caused by a storm on the Sun and a fire in the sky. A series of solar flares and explosions had launched bolts of hot, electrified gas at the Earth and stirred up the second largest magnetic storm in recorded history. Before rockets and radio and the advent of other modern devices, we probably would never have noticed the effects of this space storm. But in today's electrically powered, space-faring world, the greatest space storm of the twenty-second solar maximum rang like a wake-up call.

And we are now in the midst of another solar maximum, the effects of which are expected to be felt all the way through the year 2004. Storms from the Sun explores the emerging physical science of space weather and traces its increasing impact on a society that relies on space-based technologies.

Authors Carlowicz and Lopez explain what space weather really means to us down here, and what it may mean for future explorations and colonization of distant worlds. By translating the findings of NASA and other top scientists into fascinating and accessible descriptions of the latest discoveries, we are privy to some of the most closely held secrets that the solar terrestrial system has to offer.

Contributor(s): Michael J. Carlowicz and Ramon E. Lopez
Login or Register for a free MyNAP member account to save 10% off online and receive other benefits. [Learn More]

Contractual obligations prohibit us from offering a free PDF of this title published under the Joseph Henry Press imprint of the National Academies Press.