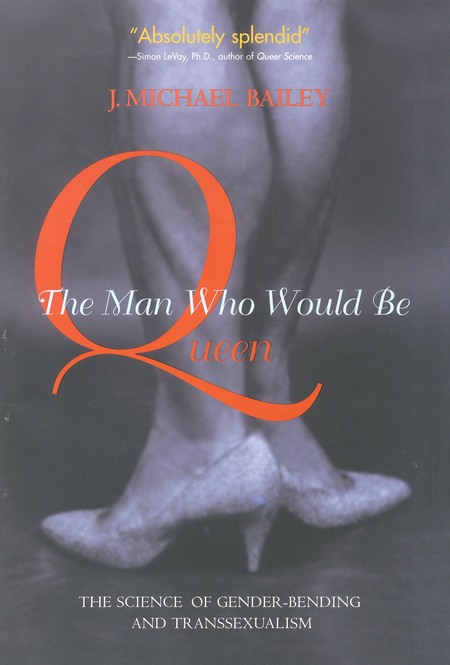 The Man Who Would Be Queen

The Science of Gender-Bending and Transsexualism (2003)

Gay. Straight. Or lying. It’s as simple and straightforward as black or white, right? Or is there a gray area, where the definitions of sex and gender become blurred or entirely refocused with the deft and practiced use of a surgeon’s knife? For some, the concept of gender – the very idea we have of ourselves as either male or female beings – is neither simple nor straightforward.

Written by cutting-edge researcher and sex expert J. Michael Bailey, The Man Who Would Be Queen is a frankly controversial, intensely poignant, and boldly forthright book about sex and gender. Based on his original research, Bailey’s book is grounded firmly in science. But as he demonstrates, science doesn’t always deliver predictable or even comfortable answers. Indeed, much of what he has to say will be sure to generate as many questions as it does answers.

Are gay men genuinely more feminine than other men? And do they really prefer to be hairdressers rather than lumberjacks? Are all male transsexuals women trapped in men’s bodies – or are some of them men who are just plain turned on by the idea of becoming a woman? And how much of a role do biology and genetics play in sexual orientation?

But while Bailey’s science is provocative, it is the portraits of the boys and men who struggle with these questions – and often with anger, fear, and hurt feelings – that will move you. You will meet Danny, an eight-year old boy whose favorite game is playing house and who yearns to dress up as a princess for Halloween. And Martin, an expert makeup artist who was plagued by inner turmoil as a youth but is now openly homosexual and has had many men as sex partners. And Kim, a strikingly sexy transsexual who still has a penis and works as a dancer and a call girl for men who like she-males while she awaits sex reassignment surgery.

These and other stories make it clear that there are men – and men who become women – who want only to understand themselves and the society that makes them feel like outsiders. That there are parents, friends, and families that seek answers to confusing and complicated questions. And that there are researchers who hope one day to grasp the very nature of human sexuality. As the striking cover image – a distinctly muscular and obviously male pair of legs posed in a pair of low-heeled pumps – makes clear, the concept of gender, the very idea we have of ourselves as either male or female beings, is neither simple nor straightforward for some.

Contributor(s): J. Michael Bailey
Login or Register for a free MyNAP member account to save 10% off online and receive other benefits. [Learn More]

Click here to download an open letter from Stephen Mautner, executive editor of the National Academies Press, addressing the controversy that attended the publication of this book.

J. Michael Bailey is the Chairman of the Psychology Departmentat Northwestern University and an internationally recognized expert on the origins of human sexual orientation. His studies of twins have been widely cited in the scientific literature and are mentioned in virtually all introductory psychology textbooks. His work has also been featured in a variety of newspapers, including The New York Times, as well as in Newsweek and Discover. He is also widely known to those interested in sex research as the creator and owner of the listserv SEXNET. Michael Bailey lives in Chicago.

Loading stats for The Man Who Would Be Queen: The Science of Gender-Bending and Transsexualism...