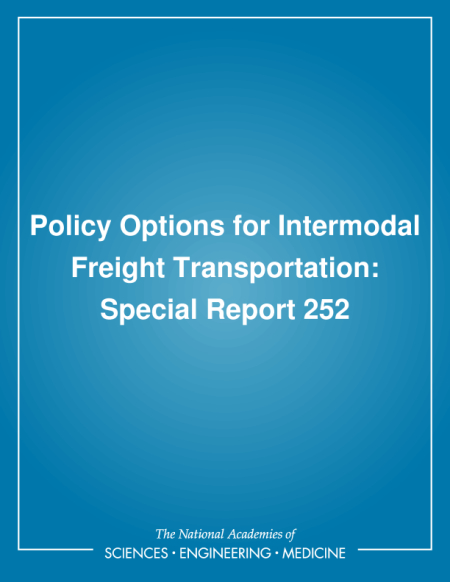 During the last two decades, the importance of freight efficiency to the nation's economy has become more apparent to federal policy makers and has emerged as an increasingly important element of laws and regulations related to surface transportation. In the Intermodal Transportation Efficiency Act of 1991 (ISTEA), Congress stated: "It is the Policy of the United States to develop a National Intermodal Transportation System that is economically efficient and environmentally sound, provides the foundation for the Nation to compete in the global economy, and will move people and goods in an energy efficient manner."

The term "intermodal" is usually interpreted as referring to places where the various modes connect for the purpose of transferring passengers or freight or to operations designed to move on more than one mode. ISTEA introduced provisions, carried over and extended in the Transportation Equity Act for the 21st Century, that allowed taxes collected for the highway trust fund to be used for intermodal investments designed to facilitate more efficient connections between the modes. Highways and trucking are central to intermodalism because virtually all freight moves by truck at some point in its trip.

Intermodal transfer points include any terminals where freight is transferred from one mode to another. Intermodal connections are critically important to freight movement. Massive seagoing vessels deliver containerized cargo to ports, where the containers are either trucked to rail yards for placement on trains or offloaded directly onto rail cars at the port terminal. Containerization has introduced extraordinary efficiencies into freight movement, but the connection points remain sources of friction and lost efficiency.

The TRB committee that examined policy options for intermodal freight transportation concluded that public investment in freight facilities is complex. These types of facilities (rail yards, port terminals, and truck terminals) have usually been financed exclusively by the private sector. The committee concluded that introducing public funds into this mix could undermine the "user pays" principle that has been fundamental to highway finance, fuel interstate rivalries, and come to be demanded by private-sector firms as a substitute for formerly private investment.

Appropriate federal and state roles in such projects are not yet well established in practice; hence there are uncertainties about how to proceed and a risk of wasted resources. Before federal and state funds are invested in such facilities, the investments should be clearly justified. Such justification might include, for example, that the investment would reduce negative externalities and increase positive externalities, or that it is necessary for national defense. In defining an appropriate public role, government agencies should apply standard analysis tools to estimate costs and benefits and winners and losers. The public role in financing major facilities should also receive close scrutiny to ensure that public benefits justify the expenditure of public funds and that users pay to the extent that they benefit. The location of benefits also matters: when benefits are primarily local rather than national, local or state governments are the appropriate sources of funding.

Contributor(s): Transportation Research Board; Committee for Study of Policy Options to Address Intermodal Freight Transportation
Login or Register for a free MyNAP member account to save 10% off online and receive other benefits. [Learn More]