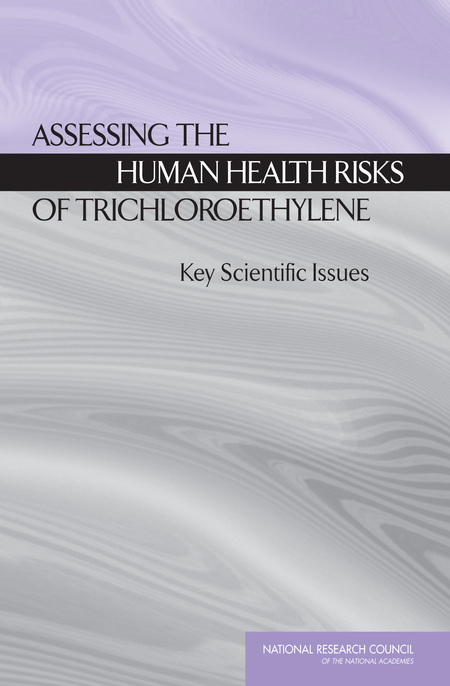 Trichloroethylene is a chlorinated solvent widely used as a degreasing agent in industrial and manufacturing settings. It is also used as a chemical intermediate in making other chemicals and is a component of products such as typewriter correction fluid, paint removers, adhesives, and spot removers. In 2001, EPA issued a draft health risk assessment and proposed exposure standards for trichloroethylene. PA's Scientific Advisory Board (SAB) reviewed the draft and it was issued for public comment. A number of scientific issues were raised during the course of these reviews.

Guidance for hazard characterization of trichloroethylene is presented in Chapters 2 through 10. Chapter 2 provides guidance for evaluating large sets of epidemiologic data. In Chapter 3, the committee applies this guidance as an example in its evaluation of the epidemiologic data on trichloroethylene and kidney cancer, and this example should help guide evaluations of other cancer risks. Chapter 3 also assesses new information on the kidney toxicity of trichloroethylene and its metabolites and potential modes of action. Chapters 4, 5, 6, 7, and 8 evaluate the key issues regarding liver toxicity and cancer, reproductive and developmental toxicity, neurotoxicity, respiratory tract toxicity and cancer, and immunotoxicity, respectively. However, the committee's review focused on mode-of-action information to understand how trichloroethylene might affect certain processes differently in different species. Chapter 9 discusses susceptibility to trichloroethylene and its metabolites, and Chapter 10 describes important factors in considering trichloroethylene in mixtures. Physiologically based pharmacokinetic models are evaluated in Chapter 11, and guidance is provided on future directions for model development. Finally, Chapter 12 considers issues related to dose-response assessment and quantitative assessment of risk.

Contributor(s): National Research Council; Division on Earth and Life Studies; Board on Environmental Studies and Toxicology; Committee on Human Health Risks of Trichloroethylene
Login or Register for a free MyNAP member account to save 10% off online and receive other benefits. [Learn More]