Get This Book
Visit NAP.edu/10766 to get more information about this book, to buy it in print, or to download it as a free PDF.
Page i Share Cite
Suggested Citation:"Front Matter." National Research Council. 1993. Intellectual Property Rights in Industry-Sponsored University Research: A Guide to Alternatives for Research Agreements. Washington, DC: The National Academies Press. doi: 10.17226/10009.
×

A Guide to Alternatives for Research Agreements

The Government-University-Industry Research Roundtable is sponsored by the National Academy of Sciences, National Academy of Engineering, and Institute of Medicine. The Research Roundtable was created in 1984 to provide a forum where scientists, engineers, administrators, and policymakers from government, university, and industry can come together on an ongoing basis to explore ways to improve-the productivity of the nation’s research enterprise. The object is to try to understand issues, to inject imaginative thought into the system, and to provide a setting for discussion and the seeking of common ground. The Roundtable does not make recommendations, nor offer specific advice. It does develop options and bring all interested parties together. The uniqueness of the Roundtable is in the breadth of its membership and in the continuity with which it can address issues.

Publications are available from:

The Government-University-Industry Research Roundtable has a longstanding interest, beginning well before my time as Chairman, in minimizing difficulties associated with the negotiation of research agreements for industry-sponsored research in universities. In 1988, a Roundtable committee, in conjunction with the Industrial Research Institute, developed a set of model agreements to streamline the negotiation process 1 . The intent was that these models would decrease the time and effort needed to develop a research agreement, as well as provide a starting point for companies and universities new to negotiating agreements.

In general, the models were well received by the academic and industrial communities. 2 However, one concern, intellectual property rights, continues to pose significant hurdles to successful negotiation. We have had repeated requests from academic and business officials for further guidance on negotiating intellectual property rights in research agreements. And members of our Roundtable Council, particularly Richard Zare, professor of chemistry at Stanford, have maintained that cooperative relationships will continue to be strained without some improvements in this area. In response, the Roundtable formed a Task Force on Intellectual Property Rights in Industry-Sponsored University Research. The members of the Task Force are listed in Appendix I .

The charge to the Task Force was to identify the contentious issues related to intellectual property rights and develop contract language that makes it easier to negotiate agreements for industry-sponsored university research. The focus of the effort was to clarify issues that cross institutional boundaries when university-industry research agreements are negotiated. In spite of the temptation to deal with several related issues, the Task Force concentrated its efforts on this narrow focus. Therefore, this document does not address other institutional issues that may or should impact how a company or a university approaches negotiations (e.g., issues related to conflict of interest, and incentives and rewards for investigators). Neither did the Task Force address some of the more global questions that arise when discussing university-industry research relationships:

These questions merit full consideration, but were beyond the scope and focus of this project.

I believe that this document will serve its purpose in clarifying the more difficult issues that arise in negotiating intellectual property rights in research agreements. I hope that using this document will enable university and industry research partners to spend less time negotiating contract clauses, and more time addressing what type of cooperative relationships and research projects make sense.

I am also hopeful that the tenor of this document will modify the erroneous perception I have heard from many quarters: that university-industry research relationships will generate substantial revenue for all involved. Experience just does not bear this out. For example, at MIT—viewed by many as the archetype at forging university-industry relationships, gross revenue from all licensing operations is equal to an amount which is less than 2 percent of the university’s overall research budget.

University and industry experts on the Task Force emphasize the value of the research rather than the financial gain that might be realized from tangible products of the research University-industry negotiations and relationships benefit when each party understands the value of the interaction to the other party. Then, the sometimes competing interests of the two parties can be balanced with regard to intellectual property rights, and a “win-win” agreement and relationship can be achieved.

The audiences for this document include officials from universities and industry who seek additional understanding of key intellectual property issues in industry-sponsored university research agreements and ways to deal with those issues. Senior officials from these organizations, who are not routinely involved in negotiating research agreements, may also be able to use this document as a conceptual framework for thinking about how university-industry research arrangements can work effectively. Also, anyone interested or involved in these relationships—

including small businesses and faculty members—might use this document as a primer to learn from those who have had extensive experience iii these negotiations.

I am delighted with what the Task Force has accomplished. Led ably by Al Barber, Special Assistant to the Chancellor of UCLA and Associate Member of the Roundtable Council, they carried out a difficult task with remarkable spirit and commitment. Casey Kiernan, Project Director, did an outstanding job of working with Task Force members, individually and collectively, and capturing and knitting together their views to create the scenarios and contract language that are the core of the final document. I hope you find this result of their efforts to be of use.

Next: Table of Contents »
Intellectual Property Rights in Industry-Sponsored University Research: A Guide to Alternatives for Research Agreements Get This Book
× 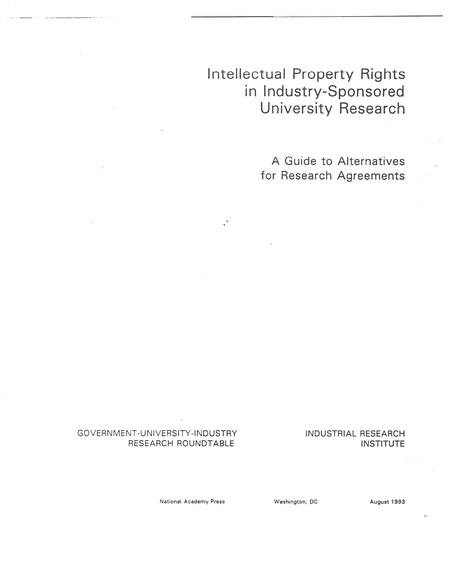