Get This Book
Visit NAP.edu/10766 to get more information about this book, to buy it in print, or to download it as a free PDF.
« Previous: Appendix B: Invited Presentations
Page 372 Share Cite
Suggested Citation:"Appendix C: Panel Biographies." National Research Council. 2001. Conceptual Models of Flow and Transport in the Fractured Vadose Zone. Washington, DC: The National Academies Press. doi: 10.17226/10102.
×

PAUL A. HSIEH, is a research hydrologist with the U.S. Geological Survey in Menlo Park, California. Dr. Hsieh is also an adjunct professor in the Department of Geological and Environmental Sciences at Stanford University. He currently serves on the U.S. National Committee for Rock Mechanics and was a member of the Committee on Fracture Characterization and Fluid Flow (Rock Fractures and Fluid Flow: Contemporary Understanding and Applications, NRC, 1996). He conducts theoretical and field research on fluid flow and solute transport in fractured rocks, development of computer simulation models, and laboratory investigations of hydraulic properties of low-permeability rocks. He is a member of the American Geophysical Union, American Society of Civil Engineers, and the National Ground Water Association.

JEAN M. BAHR is a professor in the Department of Geology and Geophysics at the University of Wisconsin-Madison. Dr. Bahr specializes in field monitoring and tracer studies of the effects of these transport processes in real time, core and outcrop studies to provide data on hydrologic and geochemical properties of aquifer materials, and numerical modeling of groundwater transport systems. She served on several NRC activities: (1) as a member of the Board on Radioactive Waste Management (1992-1997); (2) as vice-chair of the NRC Committee on Yucca Mountain Peer Review: Surface Characteristics, Preclosure Hydrology, and Erosion; and (3) as a member of the Committee on Technical Bases for Yucca Mountain Standards. She was awarded a Ph.D. by Stanford University. She is a member of the American Geophysical Union and an Associate Editor of AGU's journal “Water Resources Research.” She is also a member of the American Geological Institute 's editorial board of Geotimes.

THOMAS W. DOE is a principal of Golder Associates, Inc., located in Seattle, Washington. He is manager of the FracMan Technology Group, which develops software for analysis and modeling of heterogeneous and fractured rock masses containing discrete features such as faults, fractures, paleochannels, karsts, and stratigraphic contacts. Dr. Doe is a pioneer in the development of fractional dimension type-curve methods for understanding connectivity patterns, permeability, and storativity. He has also worked extensively on interpretation of well tests in fractured rock to determine hydraulic and geometric characteristics of fractures. Dr. Doe earned his Ph.D. from the University of Wisconsin-Madison. He is a member of the American Geophysical Union, and is currently serving as President of the American Rock Mechanics Association.

ALAN L. FLINT is a research hydrologist with the U.S. Geological Survey in the California District, Sacramento. Dr. Flint earned his Ph.D. from Oregon State University in soil physics. He has primarily been involved in modeling and field characterization of unsaturated zone infiltration and deep percolation through the vadose zone; much of his recent work has been related to hydrological conditions at Yucca Mountain, Nevada. Dr. Flint is currently conducting regional research on rainfall, runoff, infiltration, and recharge in the arid southwest. He is a member of the American Geophysical Union and the Soil Science Society of America.

GLENDON GEE is a Senior Staff Scientist in the Environmental Technology Division of the Batelle Pacific Northwest Laboratories. Dr. Gee specializes in the study of recharge in arid regions and the physical and chemical observations of fluid flow and transport under field conditions.

LYNN W. GELHAR is a Professor in the Department of Civil and Environmental Engineering at the Massachusetts Institute of Technology. Dr. Gelhar investigates the effects of natural heterogeneity in the underground aqueous systems using mathematical theory to stochastically represent the variability of flow and transport properties, and evaluates the applicability of the theoretical results through controlled field experimentation. He is a fellow of the American Geophysical Union and a recipient of the Meinzer Award by the Geological Society of America. He is the author of the advanced textbook, Stochastic Subsurface Hydrology, and has authored over 140 research publications. He has more than two decades of experience on aspects of subsurface hydrology relating to problems of radioactive waste disposal, and has served on multidisciplinary groups reviewing environmental aspects of the Hanford site in Washington, the WIPP radioactive waste disposal site in New Mexico, and the Nevada Test Site and the Yucca Mountain site in Nevada.

D. KIP SOLOMON is a chemical hydrogeologist with the Department of Geology and Geophysics at the University of Utah. He specializes in fluid flow in

soils and shallow aquifers, emphasizing the fate and transport of contaminants. Dr. Solomon has also worked on techniques for determining the age of shallow groundwater using tritium and helium isotopes and chlorofluorocarbons and using these tools to examine mass transport in fractured, clay-rich systems. He earned a Ph.D. from the University of Waterloo. He is a member of the American Geophysical Union and the Geological Society of America.

MARTINUS TH. VAN GENUCHTEN is a soil scientist and research leader in the Soil Physics and Pesticide Research Unit of the Department of Agriculture's U.S. Salinity Laboratory, Riverside, California. Dr. van Genuchten is also an adjunct professor in the Department of Soil and Environmental Sciences at the University of California, Riverside. He is an expert in water flow and solute transport in the vadose zone, analytical and numerical methods for simulating water and solute movement in the subsurface, preferential flow of water and solutes in structured media, and description and measurement of unsaturated soil hydraulic properties. He is a fellow of both the American Geophysical Union and the Soil Science Society of America. Dr. van Genuchten earned his bachelors and masters degrees from the Agricultural University (Wageningen, The Netherlands) and a Ph.D. in soil physics from New Mexico State University. From 1975 to 1978, he was with the Water Resources Program at Princeton University prior to his career with the U.S. Salinity Laboratory.

STEPHEN W. WHEATCRAFT is a Professor in the Department of Geological Sciences and Associate Dean of the Mackay School of Mines at the University of Nevada, Reno. His research ranges from classical problems such, as sea water intrusion, to the use of chaos to describe flow and transport characteristics in unsaturated fracture flow. Most recently, he has used fractional calculus to develop a new transport theory in saturated heterogeneous aquifers. Dr. Wheatcraft earned a Ph.D. from the University of Hawaii. He is a member of the American Geophysical Union, the Association of Groundwater Scientists and Engineers, and a fellow of the Geological Society of America.

Next: Color Plates »
Conceptual Models of Flow and Transport in the Fractured Vadose Zone Get This Book
× 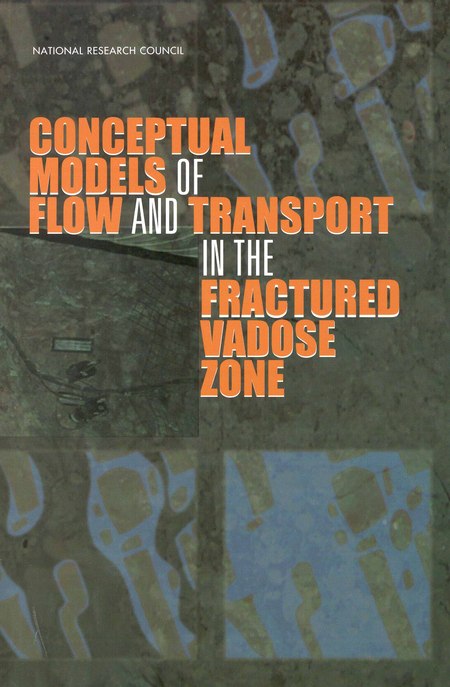 Fluid flow and solute transport within the vadose zone, the unsaturated zone between the land surface and the water table, can be the cause of expanded plumes arising from localized contaminant sources. An understanding of vadose zone processes is, therefore, an essential prerequisite for cost-effective contaminant remediation efforts. In addition, because such features are potential avenues for rapid transport of chemicals from contamination sources to the water table, the presence of fractures and other channel-like openings in the vadose zone poses a particularly significant problem, Conceptual Models of Flow and Transport in the Fractured Vadose Zone is based on the work of a panel established under the auspices of the U.S. National Committee for Rock Mechanics. It emphasizes the importance of conceptual models and goes on to review the conceptual model development, testing, and refinement processes.