Get This Book
Visit NAP.edu/10766 to get more information about this book, to buy it in print, or to download it as a free PDF.
Page i Share Cite
Suggested Citation:"Front Matter." National Research Council. 2001. Status of the Dosimetry for the Radiation Effects Research Foundation (DS86). Washington, DC: The National Academies Press. doi: 10.17226/10103.
×

Status of the Dosimetry for the Radiation Effects Research Foundation (DS86)

Committee on Dosimetry for the Radiation Effects Research Foundation

Board on Radiation Effects Research

The Institute of Medicine was established in 1970 by the National Academy of Sciences to secure the services of eminent members of appropriate professions in the examination of policy matters pertaining to the health of the public. The Institute acts under the responsibility given to the National Academy of Sciences by its congressional charter to be an adviser to the federal government and, upon its own initiative, to identify issues of medical care, research, and education. Dr. Kenneth I.Shine is president of the Institute of Medicine.

COMMITTEE ON DOSIMETRY FOR THE RADIATION EFFECTS RESEARCH FOUNDATION (RERF)

BOARD ON RADIATION EFFECTS RESEARCH

The University of Maryland, Baltimore, MD

Board on Radiation Effects Research

The dosimetry of the atomic-bomb survivors of Hiroshima and Nagasaki has been a subject of great importance for several decades to the individual survivors, whose estimated dose depends on it, and second to all the peoples of the world, because estimates of risk of possible late effects (especially cancer) of an exposure to ionizing radiation are based mainly on the studies of the survivors. The continuing studies of the A-bomb survivors are the most complete and sophisticated evaluations of health effects in an irradiated population that are available to us. Knowledge of the dosimetry has increased because new techniques of calculation of radiation transport and new techniques of measurement continue to be developed and applied. These can improve our knowledge of the dosimetric circumstances of exposure to the A-bombs.

In 1986, the senior committees of the United States (F.Seitz, Chair) and Japan (E.Tajima, Chair) approved the adoption of a new dosimetry system, DS86, for use by the Radiation Effects Research Foundation (RERF) in reconstructing the doses to the survivors. At the time, DS86 was believed to be the best available; it replaced the previous tentative system (T65D) completely, and it has shown itself to be superior to any previous system. It is also the first system to have direct experimental confirmation of the main component of the dose to the organs of exposed people—gamma rays. Nevertheless, questions have arisen about some features of DS86, in particular, whether it adequately describes the neutrons released by the Hiroshima bomb. Measurements of thermal-neutron activation in some materials have suggested more fast neutrons at greater distances from the hypocenter than calculated in DS86. This unresolved discrepancy has tended to cast suspicion on the validity of DS86 dose estimates for dose specifications for the survivors and as a basis of estimation of risk of expected effects in other exposed persons.

For these reasons, the Committee on Dosimetry for RERF, which was set up by the National Research Council (NRC) more than a decade ago at the request of the US Department of Energy, has written this report to describe the present status of DS86 and to recommend studies needed for a possible further-improved dosime-

try system. After studying the problems over a period of years, the committee convened a public forum to discuss extant difficulties with DS86 in Irvine, CA in 1996, at which a number of Japanese colleagues were present. During the meeting, a number of actions that could improve DS86 were discussed and were used as the basis of the committee’s subsequent letter report, which included a number of recommendations. Some of the recommendations already have been partially implemented; others are being pursued vigorously by the US and Japanese scientists who have continued to study the problem in their laboratories on the advice of this committee and the Japanese senior dosimetry committee. Formal scientific working groups have been set up recently in the United States and in Japan to undertake and complete these studies and two members of the Committee on Dosimetry for the RERF, R.Christy and R.Young, have agreed to step down from the committee to serve on the new working groups and to assist in the implementation of this report’s recommendations.

Concerns within the radiation protection and risk assessment communities, the findings of the NRC committee, the commitment of the US Department of Energy and the Japanese Ministry of Health, Labour and Welfare to complete medical follow-up studies of the A-bomb survivors, and recent technical developments have all come together to set the stage for the current reassessment effort. It is now the hope of both Japanese and US scientists that an improvement to DS86 can soon be described in the form of a revised dosimetry system and approved for adoption. It is not expected that a revised system will differ greatly from DS86.

In the meantime, the current report, which has been prepared by the committee members, will describe the present status of DS86, some of the apparent discrepancies that are now being investigated, some of the approaches recommended to solve the problems, and some results already achieved.

Committee on Dosimetry for the RERF

The committee members and the National Research Council are especially appreciative for the valuable input provided by numerous members of the Japanese and US Dosimetry Working Groups. Many of these scientists attended meetings in Japan and the United States and presented their data for consideration by the members of this committee. Their work is also represented in the references discussed and listed in this report. In addition, several scientists from Japan and the US hosted Wayne Lowder, Takashi Maruyama, and Harry Cullings, who visited their laboratories to review data related to the committee’s work. We wish to thank those scientists who were willing to share their data with the committee and who provided data for the committee’s analysis. A special thanks is extended to scientists Harry Cullings and Takashi Maruyama, whose dedicated survey and analysis of the measurement data was critical to the work of this committee.

The committee members are especially appreciative of the administrative assistance, logistical arrangements, and assistance with the manuscript preparation provided by Doris E.Taylor, Cathie Berkley, Benjamin Hamlin and Eric Truett.

This report has been reviewed in draft form by persons chosen for their diverse perspectives and technical expertise, in accordance with procedures approved by the National Research Council’s Report Review Committee. The purpose of this independent review is to provide candid and critical comments that will assist the institution in making the published report as sound as possible and to ensure that the report meets institutional standards for objectivity, evidence, and responsiveness to the study charge. The review comments and draft manuscript remain confidential to protect the integrity of the deliberative process. We wish to thank the following persons for their participation in the review of this report:

Although the reviewers listed above have provided many constructive comments and suggestions, they were not asked to endorse the conclusions or recommendations nor did they see the final draft of the report before its release. The review of this report was overseen by David G.Hoel, Medical University of South Carolina and John Dowling, Harvard University. Appointed by the National Research Council, they were responsible for making certain that an independent examination of this report was carried out in accordance with institutional procedures and that all review comments were carefully considered. Responsibility for the final content of this report rests entirely with the authoring committee and the institution.

Next: Executive Summary »
Status of the Dosimetry for the Radiation Effects Research Foundation (DS86) Get This Book
× 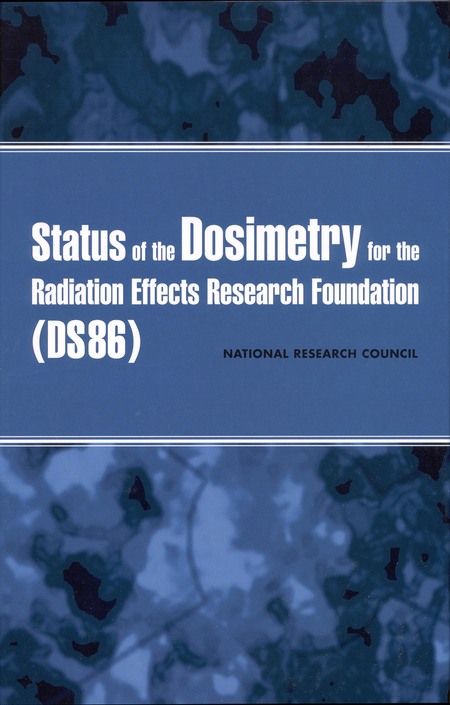 The Committee on Dosimetry for the Radiation Effects Research Foundation (RERF) was set up more than a decade ago at the request of the U.S. Department of Energy. It was charged with monitoring work and experimental results related to the Dosimetry System 1986 (DS86) used by RERF to reconstruct the radiation doses to the survivors in Hiroshima and Nagasaki. At the time it was established, DS86 was believed to be the best available dosimetric system for RERF, but questions have persisted about some features, especially the estimates of neutrons resulting from the Hiroshima bomb.

This book describes the current situation, the gamma-ray dosimetry, and such dosimetry issues as thermal-neutron discrepancies between measurement and calculation at various distances in Hiroshima and Nagasaki. It recommends approaches to bring those issues to closure and sets the stage for the recently convened U.S. and Japan Working Groups that will develop a new dosimetry for RERF.

The book outlines the changes relating to DS86 in the past 15 years, such as improved numbers that go into, and are part of, more sophisticated calculations for determining the radiations from bombs that reach certain distances in air, and encourages incorporation of the changes into a revised dosimetry system.