The Social and Built Environment in an Older Society (1988)

Visit NAP.edu/10766 to get more information about this book, to buy it in print, or to download it as a free PDF.
Page i Share Cite
Suggested Citation:"FRONT MATTER." Institute of Medicine. 1988. The Social and Built Environment in an Older Society. Washington, DC: The National Academies Press. doi: 10.17226/1012.
×

National Academy Press · 2101 Constitution Avenue, NW · Washington, DC 20418 NOTICE: The project that is the subject of this report was approved by the Governing Board of the National Research Council, whose members are drawn from the councils of the National Academy of Sciences, the National Academy of Engineering, and the Institute of Medicine. The members of the committee responsible for the report were chosen for their special competences and with regard for appropriate balance. This report has been reviewed by a group other than the authors according to procedures approved by a Report Review Committee consisting of members of the National Academy of Sciences, the National Academy of Engineering, and the Institute of Medicine. The Institute of Medicine was chartered in 1970 by the National Academy of Sciences to enlist distinguished members of the appropriate professions in the examination of policy matters pertaining to the health of the public. In this, the Institute acts under both the Academy's 1863 congressional charter respon- sibility to be an adviser to the federal government and its own initiative in identifying issues of medical care, research, and education. This study has been supported by funds from the National Research Council Fund, a pool of private, discretionary, nonfederal funds that is used to support a program of Academy-initiated studies of national issues in which science and technology figure significantly. The NRC Fund consists of contributions from a consortium of private foundations including the Carnegie Corporation of New York, the Charles E. Culpeper Foundation, the William and Flora Hewlett Foundation, the John D. and Catherine T. MacArthur Foundation, the Andrew W. Mellon Foundation, the Rockefeller Foundation, and the Alfred P. Sloan Foundation; the Academy Industry Program, which seeks annual contributions from companies that are concerned with the health of U.S. science and technol- ogy and with public policy issues with technological content; and the National Academy of Sciences and the National Academy of Engineering endowments. The study was also supported by the Charles A. Dana Foundation and the Retirement Research Foundation. Library of Congress Cataloging in Publication Data Committee on an Aging Society (U.S.) The social and built environment in an older society / Committee on an Aging Society, Institute of Medicine and National Research Council. p. cm. - (America's aging) Bibliography: p. Includes index. 1. Aging-United States-Social conditions-Congresses. 2. Aged- Services for-United States-Congresses. 3. Quality of life- United States-Congresses. I. Title. II. Series. HQ1064.USC535 1988 305.2'6'0973-dcl9 ISBN 0-309-03780-8 Cover photograph: (I) by Ron Blakeley/UNIPHOTO. Printed in the United States of America. 88-17837 CIP

Preface Substantial increases in the number and proportion of older persons in the decades ahead portend significant changes in American society. Indeed, demographic projections of a popula- tion rapidly growing older have led some observers to character- ize the United States as an "aging society." The ways in which an aging society might be a different soci- ety, in other than demographic characteristics, are not entirely clear. But it is evident that the changing age distribution of the population will have major implications, at the very least for the following: · financing, development, organization, and use of health care systems; · patterns of family life, social relations, cultural institutions, living arrangements, and physical environments; · distribution of jobs among older and younger workers, as well as the earnings, status, and satisfaction that these jobs may provide, within the context of age discrimination laws, seniority practices, and technological innovation; · economic aspects of providing retirement income through various public and private mechanisms; · quality of life of the population throughout the life course including functional status, well-being, legal status, and per- sonal autonomy; and · an ever-shifting agenda of related public policy issues. v

V1 PREFACE If we are to deal effectively with these issues, our current under- standing of the specific implications-for older and younger per- sons, for age relations, and for the institutions of our society- must be expanded. The Committee on an Aging Society was organized to identify selected issues that need to be confronted, both soon and over the longer term. Recognizing that many organizations and ad hoc groups have been addressing a range of issues associated with aging and with older persons as an age group, the commit- tee has attempted to emphasize broader societal issues as well. From among those issues the Committee on an Aging Society suggests topics that warrant systematic investigations fostered by the National Research Council, the Institute of Medicine, and other organizations. It is the committee's belief that such inves- tigations of these topics will provide a basis for action by policy- makers in both the private and public sectors. This volume is the third report in a series, called America's Aging, in which the committee calls attention to issues that emerged from symposia convened to explore selected topics. Other reports or proposed symposia focus on health in an aging society, productive roles, and legal and ethical issues. This report summarizes the conferees' recommendations and the discussions on which they were based and presents the pa- pers commissioned for the December 1985 Symposium on the Social and Built Environment in an Aging Society. FREDERICK C. ROBBINS Chairman Committee on an Aging Society

Acknowledgments As with many reports issued by the Institute of Medicine, this report represents the collaborative efforts of the committee, the project staff and individuals who contributed specific papers in this report. Several participants at the meeting also contributed to the report. We wish especially to thank Michael Rodgers, then Staff Director of the Subcommittee on Housing and Consumer Interests, Select Committee on Aging, U.S. House of Represen- tatives, for his contribution on federal legislation on housing for older persons now part of the first summary chapter. Two com- mittee members, William G. Bell and M. Powell Lawton, made major contributions to the planning, convening, and summari- zation of the symposium. Without their continuing contribu- tions, this volume would not have been possible. ·e V11

Next: SUMMARY »
The Social and Built Environment in an Older Society Get This Book
× 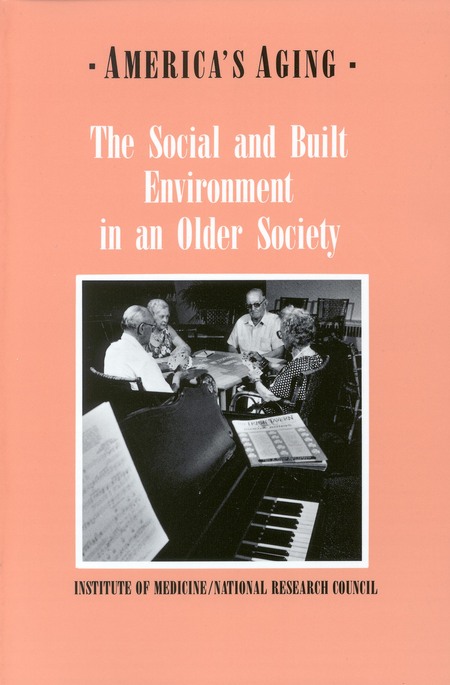 Third in the series, this book addresses the social implications of architectural and interpersonal environments for older people. It suggests how society and its structures can enhance the productivity of, and preserve the quality of life for, older residents in a community. The study investigates new approaches to the problem, including new housing alternatives and new strategies for reflecting the needs of the elderly in housing construction.