Get This Book
Visit NAP.edu/10766 to get more information about this book, to buy it in print, or to download it as a free PDF.
« Previous: Appendixes
Page 165 Share Cite
Suggested Citation:"A Priority Lists of Chemicals." National Research Council. 2001. Standing Operating Procedures for Developing Acute Exposure Guideline Levels for Hazardous Chemicals. Washington, DC: The National Academies Press. doi: 10.17226/10122.
×

Appendix A
Priority Lists of Chemicals

A master list of approximately 1,000 acutely toxic chemicals was initially compiled through the integration of individual priority lists of chemicals submitted by each U.S. federal agency placing a representative on the NAC/AEGL Committee. The master list was subsequently reviewed by individuals from certain state agencies and representatives from organizations in the private sector and modified as a result of comments and suggestions received. The various priority chemical lists were compiled separately by each federal agency based on their individual assessments of the hazards, potential exposure risk, and relevance of a chemical to their programmatic needs.

On May 21, 1997, a list of 85 chemicals was published in the Federal Register. This list identified those chemicals to be of highest priority across all U.S. federal agencies and represented the selection of chemicals for AEGL development by the NAC/AEGL Committee for the first 2–3 years of the program. The committee has now addressed most of these chemicals, and they are currently in the “proposed,” “interim,” or “final” stages of development. Certain chemicals did not contain an adequate database for AEGL development and, consequently, are on hold pending decisions regarding further toxicity testing. This initial “highest” priority list of 85 chemicals is shown in Table A-1.

A second “working list” of approximately 100 priority chemicals is being selected from the original master list or from new high-priority candidate chemicals submitted by U.S. agencies and organizations and by member coun-

tries of the Organization for Economic Cooperation and Development (OECD) that are planning to participate in the AEGL Program. Although “working lists” will be published in the Federal Register and elsewhere from time to time to indicate the NAC/AEGL Committee’s agenda, the priority of chemicals addressed, and, hence, the “working list,” is subject to modification if priorities of the NAC/AEGL Committee or individual stakeholder organizations, including international members, change during that period.

Next: B Diagram of the AEGL Development Process »
Standing Operating Procedures for Developing Acute Exposure Guideline Levels for Hazardous Chemicals Get This Book
× 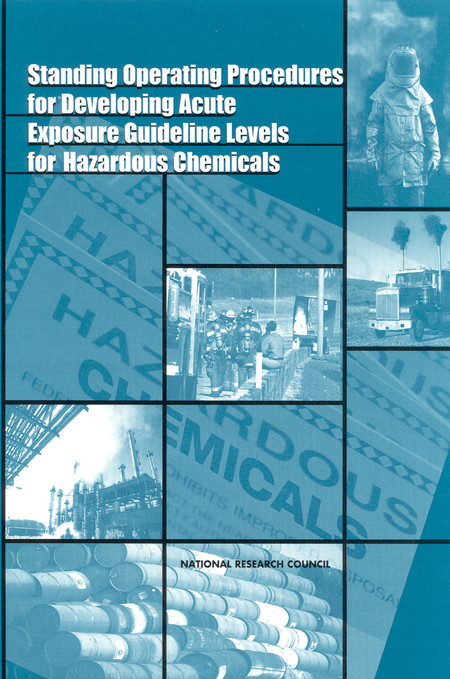 The book provides guidance on what documents and databases to use, toxicity endpoints that need to be evaluated, dosimetry corrections from animal to human exposures, selection of appropriate uncertainty factors to address the variability between animals and humans and within the human population, selection of modifying factors to address data deficiencies, time scaling, and quantitative cancer risk assessment.

It also contains an example of a summary of a technical support document and an example of AEGL derivation. This book will be useful to persons in the derivation of levels from other exposure routes—both oral and dermal—as well as risk assessors in the government, academe, and private industry.