Get This Book
Visit NAP.edu/10766 to get more information about this book, to buy it in print, or to download it as a free PDF.
« Previous: 9 Data Collection for CPI Construction
Page 283 Share Cite
Suggested Citation:"Appendix: Statistical Definition and Estimation of Price Indexes." National Research Council. 2002. At What Price?: Conceptualizing and Measuring Cost-of-Living and Price Indexes. Washington, DC: The National Academies Press. doi: 10.17226/10131.
×

This report addresses foundational economic concepts for cost-of-living or price indexes. In the panel’s view, the concepts must reflect the reality of the marketplace; they must capture the change in real prices paid by real consumers. The concepts must be measurable in the context of a system of surveys and other data collection activities that the Bureau of Labor Statistics (BLS) can feasibly implement.

An important step in assessing the measurability and reality of a particular price index concept is to express the concept statistically in the form of a population parameter to be estimated. If one can write down the parameter, one can examine the feasibility of surveys and other data collection activities necessary to produce accurate statistical estimators of the parameters. One can also examine whether the parameter is defined in terms of the prices actually paid by consumers.

In what follows, we translate our concepts into explicit population parameters. We define the price indexes motivated by our concepts and demonstrate briefly the survey data required to estimate the indexes.

To begin, consider a simple world in which there is only one good and two time periods, base and comparison and a static universe of households (HH), denoted by the set H. For cases in which it would be better to work in terms of subgroups within HHs called consumer units (CU), let H denote the universe of CUs.

Next, let us introduce the bulk of the requisite notation. Let

In these definitions, we use the convention

for nonbuyers in the base period and

for nonbuyers in the comparison period. We assume there is at least one buyer, Q0 > 0 and Qt > 0, in each period.

, and average prices per unit,

, are defined in the obvious way. The decomposition of the period-to-period trend in total dollar volume is now given by

We can next further extend the work to a still more realistic world in which a static set of goods is available in the market at both time periods. Let subscript g signify a good, and to simplify the notation let G represent both the set and the number of goods. Total dollar volumes are now defined by

for base and comparison periods, respectively. Average units volumes,

, and average prices per unit,

, are defined in the obvious way. Also, define the G × 1 vectors of average unit volumes and average prices per unit

Then, the period-to-period trend in total dollar volume is given by 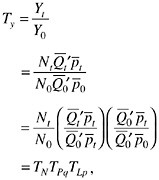 An alternative decomposition of the trend is

where TLq is a Laspeyres index of units volume and TPp is a Paasche price index. A second alternative decomposition of the trend is

where TFq and TFp are Fisher indexes of unit volume and prices, respectively.

Continuing goods are marketed in both time periods, while exiting goods appear in the base period but not in the comparison, and entering goods appear in the comparison but not in the base. There is gray area we have called linkable goods. These are goods for which there is no exact match between the predecessor good and the successor good, but for which economic theory nevertheless accepts the link for purposes of index number construction. BLS has some linkage rules or criteria which it uses currently in producing the monthly CPI. 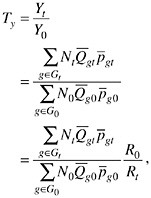 is the continuing and linkable volume as a proportion of the total base volume, and

is the continuing and linkable volume as a proportion of the total comparison volume.

be the trend in the proportion continuing or linkable. Then building on the above, the trend in total dollar volume can be decomposed as

In the first two formulations, we faced a simple world with only one good. In this world, the price index

is both plutocratic and democratic.

In the third formulation, we faced a limited world in which a static set of goods is available in the marketplace. In this world, the plutocratic Laspeyres price index can be rewritten as

is simply market share expressed in dollars calculated across all HHs in the base period population with respect to the total market basket, G. Given the same assumptions, the democratic Laspeyres price index is defined by

is total consumption volume by the ith HH in the base period, and

is the population mean per HH of total consumption volume. Thus, the plutocratic weight exceeds (is exceeded by) the democratic weight for any good that displays a positive (negative) correlation between total HH consumption and HH market share. The weights are equal in the event of zero correlation. For example,

Across all goods, one can now conclude the following relationship between price indexes:

The difference between the price indexes is determined by the pattern of covariances and price trends across goods. If goods for which the covariance is positive experience relatively large increases in average price, plutocratic price indexes may exceed their democratic counterparts. In general, however, the direction of the difference between the price indexes is far from certain for a given comparison period, t, let alone across periods. This matter is ripe for empirical investigation.

There are at least two approaches to estimating the price indexes: household (HH) survey data and store survey data. In this section, we explore the first approach; in the next section we look at the second.

Let s0 and st denote probability samples drawn from the universe of HHs at times 0 and t, respectively. At each time period, assume that BLS collects unit volume and prices for all buying occasions for all goods from each HH, i, in the sample. Comprehensive data of this kind are not currently collected by any BLS survey. It might be feasible—using scanning technology or other approaches—to design surveys to collect such data.

Let Wit and Wi0 denote survey weights such that

are essentially design-unbiased estimators of the totals Qgt and Qg0, respectively. Similarly, define the estimated totals 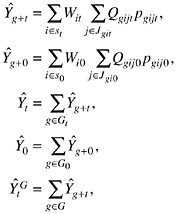 The latter two estimators reflect total dollar volume across all continuing and linkable goods. From these basic estimated totals, one can consistently estimate the ratios

One can estimate the price indexes:

Estimators for the other trends and indexes—

—are defined in the obvious way.

Next, consider the possibility of estimating the price indexes exclusively using store-level data. Let s0 and st denote probability samples of stores, let the subscript k index the store, and let Wk0 and Wkt denote survey weights corresponding to the unbiased estimator of a population total at times 0 and t, respectively. It is easy to imagine estimators

of total dollar volume and

of total unit volume. These estimators obviously require data on prices and unit volume by good at the store level. Current BLS surveys do not collect such data, but surveys based upon scanning technology could produce these data, at least for a subset of goods in a subdomain of stores. Given

, it is possible to estimate the plutocratic price indexes.

The question is whether the price indexes estimated on the basis of store data really estimate TLp, TPp, and TFp. One would anticipate some biases due to such factors as

Regrettably, it is not possible to estimate the democratic index ILp exclusively from store-level data, at least not without additional assumptions. The democratic weights,

, are population means per HH, and HH data are necessary to estimate the means unbiasedly; such data are not usually available from stores (some store chains have adopted ID card programs that allow tracking of purchases by consumer).

Then we define the estimator of the democratic weights as

where the adjustment factor is the second term on the right side, developed from an independent HH survey, such as the Consumer Expenditure Survey. In this factor, c(Dgi0,Y+i0) is an estimator of the covariance between HH share and total HH consumption, and

Without question, one can imagine other hybrid schemes for estimating plutocratic or democratic price indexes. BLS’s current method is an outstanding example, with quantity weights coming from one survey and monthly prices from another.

Next: References »
At What Price?: Conceptualizing and Measuring Cost-of-Living and Price Indexes Get This Book
× 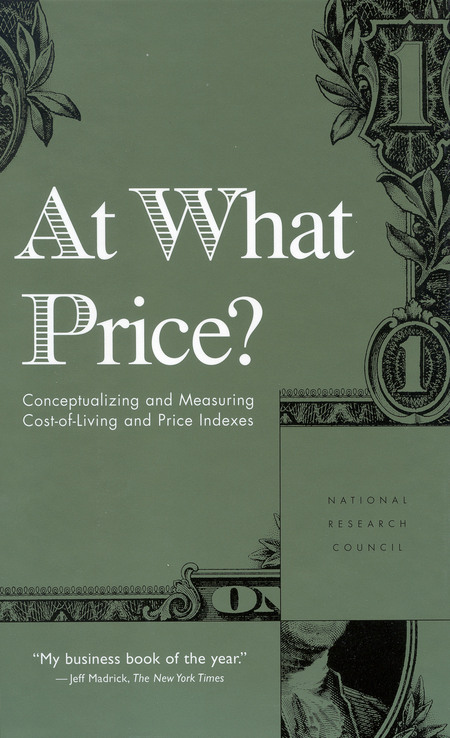