Get This Book
Visit NAP.edu/10766 to get more information about this book, to buy it in print, or to download it as a free PDF.
Page i Share Cite
Suggested Citation:"Front Matter." National Research Council. 2001. Climate Change Science: An Analysis of Some Key Questions. Washington, DC: The National Academies Press. doi: 10.17226/10139.
×

CLIMATE CHANGE SCIENCE
AN ANALYSIS OF SOME KEY QUESTIONS

Copyright 2001 by the National Academy of Sciences . All rights reserved.

The Institute of Medicine was established in 1970 by the National Academy of Sciences to secure the services of eminent members of appropriate professions in the examination of policy matters pertaining to the health of the public. The Institute acts under the responsibility given to the National Academy of Sciences by its congressional charter to be an adviser to the federal government and, upon its own initiative, to identify issues of medical care, research, and education. Dr. Kenneth I.Shine is president of the Institute of Medicine.

The National Research Council was organized by the National Academy of Sciences in 1916 to associate the broad community of science and technology with the Academy's purposes of furthering knowledge and advising the federal government. Functioning in accordance with general policies determined by the Academy, the Council has become the principal operating agency of both the National Academy of Sciences and the National Academy of Engineering in providing services to the government, the public, and the scientific and engineering communities. The Council is administered jointly by both Academies and the Institute of Medicine. Dr. Bruce M.Alberts and Dr. William A.Wulf are chairman and vice chairman, respectively, of the National Research Council.

COMMITTEE ON THE SCIENCE OF CLIMATE CHANGE

This study originated from a White House request to help inform the Administration's ongoing review of U.S. climate change policy. In particular, the written request ( Appendix A) asked for the National Academies' “assistance in identifying the areas in the science of climate change where there are the greatest certainties and uncertainties,” and “views on whether there are any substantive differences between the IPCC [Intergovernmental Panel on Climate Change] Reports and the IPCC summaries.” In addition, based on discussions with the Administration, the following specific questions were incorporated into the statement of task for the study:

The White House asked for a response “as soon as possible” but no later than early June—less than one month after submitting its formal request.

The National Academies has a mandate arising from its 1863 charter to respond to government requests when asked. In view of the critical nature of this issue, we agreed to undertake this study and to use our own funds to support it.

A distinguished committee with broad expertise and diverse perspectives on the scientific issues of climate change was therefore appointed through the National Academies' National Research Council (see Appendix B for biographical information on committee members). In early May, the committee held a conference call to discuss the specific questions and to prepare for its 2-day meeting (May 21–22, 2001) in Irvine, California. The committee reviewed the 14 questions and deter

mined that they represent important issues in climate change science and could serve as a useful framework for addressing the two general questions from the White House.

For the task of comparing IPCC Reports and Summaries, the committee focused its review on the work of IPCC Working Group I, which dealt with many of the same detailed questions being asked above. The committee decided to address the questions in the context of a brief document that also could serve as a primer for policy makers on climate change science. To aid in the presentation, the questions have been organized into seven sections, with the questions addressed in each section listed in italics at the beginning of that section.

While traditional procedures for an independent NRC study, including review of the report by independent experts, were followed, it is important to note that tradeoffs were made in order to accommodate the rapid schedule. For example, the report does not provide extensive references to the scientific literature or marshal detailed evidence to support its “answers” to the questions. Rather, the report largely presents the consensus scientific views and judgments of committee members, based on the accumulated knowledge that these individuals have gained—both through their own scholarly efforts and through formal and informal interactions with the world's climate change science community.

The result is a report that, in my view, provides policy makers with a succinct and balanced overview of what science can currently say about the potential for future climate change, while outlining the uncertainties that remain in our scientific knowledge.

The report does not make policy recommendations regarding what to do about the potential of global warming. Thus, it does not estimate the potential economic and environmental costs, benefits, and uncertainties regarding various policy responses and future human behaviors. While beyond the charge presented to this committee, scientists and social scientists have the ability to provide assessments of this type as well. Both types of assessments can be helpful to policy makers, who frequently have to weigh tradeoffs and make decisions on important issues, despite the inevitable uncertainties in our scientific understanding concerning particular aspects. Science never has all the answers. But science does provide us with the best available guide to the future, and it is critical that our nation and the world base important policies on the best judgments that science can provide concerning the future consequences of present actions.

I would especially like to thank the members of this committee and its staff for an incredible effort in producing this important report in such a short period of time. They have sacrificed many personal commitments and worked long weekends to provide the nation with their considered judgments on this critical issue.

Although the reviewers listed above have provided constructive comments and suggestions, they were not asked to endorse the conclusions or recommendations nor did they see the final draft of the report before its release. The review of this report was overseen by Richard M.Goody (Harvard University) and Robert A.Frosch (Harvard University). Appointed by the National Research Council, they were responsible for making certain that an independent examination of this report was carried out in accordance with institutional procedures and that all review comments were carefully considered. Responsibility for the final content of this report rests entirely with the authoring committee and the institution.

Next: Summary »
Climate Change Science: An Analysis of Some Key Questions Get This Book
× 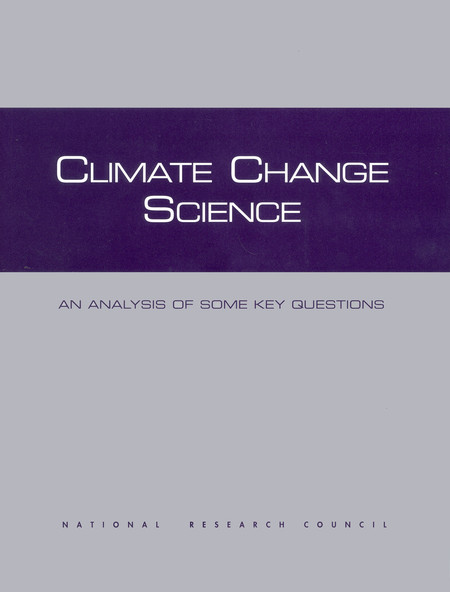