Visit NAP.edu/10766 to get more information about this book, to buy it in print, or to download it as a free PDF.
Page i Share Cite
Suggested Citation:"Front Matter." National Research Council. 2001. Assessing the TMDL Approach to Water Quality Management. Washington, DC: The National Academies Press. doi: 10.17226/10146.
×

NOTICE: The project that is the subject of this report was approved by the Gov- erning Board of the National Research Council, whose members are drawn from the councils of the National Academy of Sciences, the National Academy of Engi- neering, and the Institute of Medicine. The members of the committee responsible for the report were chosen for their special competencies and with regard for ap- propriate balance. Support for this project was provided by the U.S. Environmental Protection Agency under Cooperative Agreement No. X-82880401. International Standard Book Number 0-309-07579-3 Assessing the TMDL Approach to Water Quality Management is available from the Water Science and Technology Board, 2101 Constitution Avenue, N.W., HA 462, Washington, D.C. 20418; (202) 334-3422; Internet <http://www.nap.edu>. Copyright 2001 by the National Academy of Sciences. All rights reserved. Printed in the United States of America.

Preface The Total Maximum Daily Load (TMDL) program, initiated in the 1972 Clean Water Act, recently emerged as a foundation for the nationâs efforts to meet state water quality standards. A âTMDLâ refers to the âtotal maximum daily loadâ of a pollutant that achieves compliance with a water quality standard; the âTMDL processâ refers to the plan to de- velop and implement the TMDL. Failure to meet water quality standards is a major concern nationwide; it is estimated that about 21,000 river segments, lakes, and estuaries have been identified by states as being in violation of one or more standards. To address this problem, the U. S. Environmental Protection Agency (EPA) proposed an ambitious timeta- ble for states to develop TMDL plans that will result in attainment of water quality standards. Given the reduction in pollutant loading from point sources such as sewage treatment plants over the last 30 years, the successful implementation of most TMDLs will require controlling non- point source pollution. These two features, the ambitious timetable and nonpoint source controls, are probably the two most controversial of many issues that have been raised by those who have questioned the TMDL program. Behind and intertwined with these basic policy issues are important questions concerning the adequacy of the science in support of TMDLs. In the last year, the TMDL program has become one of the most dis- cussed and debated environmental programs in the nation, primarily be- cause of the drafting of final rules for the program. These rules follow several years of intense activity, including the formation of a Federal Advisory Committee devoted to this topic. In October 2000, Congress suspended EPAâs implementation of these rules until further information could be gathered on several aspects of the program. In particular, Con- gress requested that the National Research Council (NRC) examine the vii

viii Preface scientific basis of the TMDL program. In recognition of the urgent need to address water quality standard violations, Congress established an ag- gressive schedule for completion of the study that allowed only four months from start to finishâunprecedented for most NRC studies. The eight-member committee, constituted in January 2001, immediately con- ducted its first meeting. This three-day meeting included two days de- voted to public comments and a third day focused on internal committee discussions. The ensuing three months was a period of intense activity filled with correspondence, writing, and two additional committee meet- ings. The difficult challenges facing EPA and the states in the implemen- tation of the TMDL program were immediately apparent to the commit- tee. Because the committee faced a congressionally mandated deadline, a number of issues important to some stakeholders were not addressed comprehensively. These include bed sediment issues, atmospheric depo- sition, translating narrative standards into numeric criteria, and a full re- view of existing water quality models. Nonetheless, the committee found that substantial improvements can be made in a number of areas to strengthen the scientific basis of the TMDL program. Also of impor- tance, the committee identified several policy issues that are restricting the use of the best science in the TMDL program. We urge Congress, EPA, and the states to give thoughtful attention to the recommendations made throughout this report so that resources can be more efficiently used to improve water quality. We greatly appreciate the assistance of Don Brady and FranÃ§oise Brasier of the EPA Office of Water for their assistance in initiating the study and organizing the first committee meeting. We are also grateful to those who spoke with and educated our committee, including congres- sional staff, EPA scientists, state representatives, and the many individu- als and organizations that submitted comments to the committee. The committee recognizes the vital role of Water Science and Tech- nology Board (WSTB) director Stephen Parker in making this study pos- sible. The extremely short time period for this study created an enor- mous challenge for NRC study director Laura Ehlers, who was able to juggle her many responsibilities to keep us focused and provide invalu- able assistance in crafting the text. Finally, it is fair to say that this study owes most thanks to Leonard Shabman (Virginia Polytechnic Institute and State University) who was working in the WSTB office as a visiting scholar during the study. Dr. Shabmanâs insight was invaluable; he added immensely to committee discussion and correspondence, and he

Preface ix played a key role in drafting the text and developing the recommenda- tions. More formally, the report has been reviewed by individuals chosen for their diverse perspectives and technical expertise, in accordance with procedures approved by the NRCâs Report Review Committee. The pur- pose of this independent review is to provide candid and critical com- ments that will assist the authors and the NRC in making the published report as sound as possible and to ensure that the report meets institu- tional standards for objectivity, evidence, and responsiveness to the study charge. The reviews and draft manuscripts remain confidential to protect the integrity of the deliberative process. We thank the following indi- viduals for their participation in the review of this report: Richard A. Conway, consultant; Paul L. Freedman, Limno-Tech, Inc.; Donald R. F. Harleman, Massachusetts Institute of Technology (retired); Robert M. Hirsch, U.S. Geological Survey; Judith L. Meyer, University of Georgia; Larry A. Roesner, Colorado State University; Robert V. Thomann, Man- hattan University (retired); and Robert C. Ward, Colorado State Univer- sity. Although the reviewers listed above have provided many construc- tive comments and suggestions, they were not asked to endorse the con- clusions or recommendations, nor did they see the final draft of the re- port before its release. The review of this report was overseen by Frank H. Stillinger, Princeton University, and D. Peter Loucks, Cornell Univer- sity. Appointed by the NRC, they were responsible for making certain that an independent examination of this report was carried out in accor- dance with institutional procedures and that all review comments were carefully considered. Responsibility for the final content of this report rests entirely with the authoring committee and the NRC. KENNETH H. RECKHOW Chair

Next: Executive Summary »
Assessing the TMDL Approach to Water Quality Management Get This Book
× 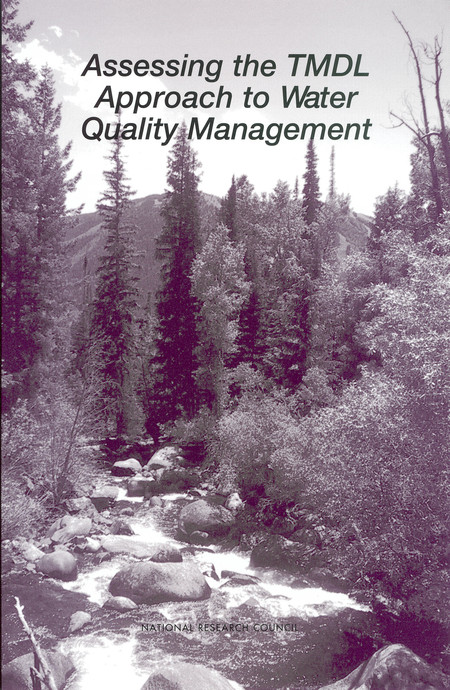 Over the last 30 years, water quality management in the United States has been driven by the control of point sources of pollution and the use of effluent-based water quality standards. Under this paradigm, the quality of the nation's lakes, rivers, reservoirs, groundwater, and coastal waters has generally improved as wastewater treatment plants and industrial dischargers (point sources) have responded to regulations promulgated under authority of the 1972 Clean Water Act. These regulations have required dischargers to comply with effluent-based standards for criteria pollutants, as specified in National Pollutant Discharge Elimination System (NPDES) permits issued by the states and approved by the U.S. Environmental Protection Agency (EPA). Although successful, the NPDES program has not achieved the nation's water quality goals of "fishable and swimmable" waters largely because discharges from other unregulated nonpoint sources of pollution have not been as successfully controlled. Today, pollutants such as nutrients and sediment, which are often associated with nonpoint sources and were not considered criteria pollutants in the Clean Water Act, are jeopardizing water quality, as are habitat destruction, changes in flow regimes, and introduction of exotic species. This array of challenges has shifted the focus of water quality management from effluent-based to ambient- based water quality standards.

Given the most recent lists of impaired waters submitted to EPA, there are about 21,000 polluted river segments, lakes, and estuaries making up over 300,000 river and shore miles and 5 million lake acres. The number of TMDLs required for these impaired waters is greater than 40,000. Under the 1992 EPA guidance or the terms of lawsuit settlements, most states are required to meet an 8- to 13-year deadline for completion of TMDLs. Budget requirements for the program are staggering as well, with most states claiming that they do not have the personnel and financial resources necessary to assess the condition of their waters, to list waters on 303d, and to develop TMDLs. A March 2000 report of the General Accounting Office (GAO) highlighted the pervasive lack of data at the state level available to set water quality standards, to determine what waters are impaired, and to develop TMDLs.

This report represents the consensus opinion of the eight-member NRC committee assembled to complete this task. The committee met three times during a three-month period and heard the testimony of over 40 interested organizations and stakeholder groups. The NRC committee feels that the data and science have progressed sufficiently over the past 35 years to support the nation's return to ambient-based water quality management. Given reasonable expectations for data availability and the inevitable limits on our conceptual understanding of complex systems, statements about the science behind water quality management must be made with acknowledgment of uncertainties. This report explains that there are creative ways to accommodate this uncertainty while moving forward in addressing the nation's water quality challenges.