Get This Book
Visit NAP.edu/10766 to get more information about this book, to buy it in print, or to download it as a free PDF.
Page i Share Cite
Suggested Citation:"Front Matter." National Research Council. 2001. Energy Research at DOE: Was It Worth It? Energy Efficiency and Fossil Energy Research 1978 to 2000. Washington, DC: The National Academies Press. doi: 10.17226/10165.
×

Energy Research at DOE WAS IT WORTH IT?

This report and the study on which it is based were supported by Contract No. DE-AM01-99PO80016, Task Order DE-AT01-00EE10735.A000, from the U.S. Department of Energy. Any opinions, findings, conclusions, or recommendations expressed in this publication are those of the author(s) and do not necessarily reflect the view of the agency that provided support for the project.

Additional copies are available for sale from:

The National Research Council was organized by the National Academy of Sciences in 1916 to associate the broad community of science and technology with the Academy’s purposes of furthering knowledge and advising the federal government. Functioning in accordance with general policies determined by the Academy, the Council has become the principal operating agency of both the National Academy of Sciences and the National Academy of Engineering in providing services to the government, the public, and the scientific and engineering communities. The Council is administered jointly by both Academies and the Institute of Medicine. Dr. Bruce M.Alberts and Dr. Wm. A.Wulf are chairman and vice chairman, respectively, of the National Research Council.

Liaison from the Board on Energy and Environmental Systems

Board on Earth Sciences and Resources (BESR)

BOARD ON ENERGY AND ENVIRONMENTAL SYSTEMS

The Committee on Benefits of DOE R&D on Energy Efficiency and Fossil Energy wishes to acknowledge and thank the staffs of the Office of Energy Efficiency and Renewable Energy and the Office of Fossil Energy for their exemplary cooperation during the course of this project. The committee called on these offices for extensive data, analyses, and presentations, which added significantly to their already heavy workload.

The committee also wishes to express appreciation to a number of other individuals and organizations for providing important background information for its deliberations. Loretta Beaumont of the U.S. House Appropriations Committee briefed us on the congressional origins of this study. Members of the committee visited the General Electric Company and Babcock & Wilcox, whose cooperation and openness are greatly appreciated. Other organizations that briefed the committee at one or more of its public meetings include the Ford Motor Company, the Gas Research Institute, Wolk Integrated Services, the Foster Wheeler Development Corporation, International Fuel Cells, Siemens Westinghouse, the Air Conditioning and Refrigeration Institute, the U.S. General Accounting Office, Avista Laboratories, the U.S. Environmental Protection Agency, the Peabody Group, CONSOL Energy Incorporated, and SIMTECHE. The committee is grateful for the facts and insights that these briefings provided.

Importantly, the committee recognizes the contribution of Roger Bezdek, whose analytic support and keen advice were essential to the completion of its work.

Finally, the chair is acutely aware of the extraordinary efforts of the members of the committee and of the staff of the Board on Energy and Environmental Systems of the National Research Council (NRC). Every member of the committee contributed to the analysis of the case studies that form the foundation of this report and to the deliberations on the report itself. The staff, led by Richard Campbell, managed a very complicated and voluminous process in accordance with the highest standards of the NRC. What the committee was able to accomplish of the ambitious agenda set by Congress is entirely due to the efforts of these persons.

This report has been reviewed by individuals chosen for their diverse perspectives and technical expertise, in accordance with procedures approved by the National Research Council Report Review Committee. The purpose of this independent review is to provide candid and critical comments that will assist the institution in making its published report as sound as possible and to ensure that the report meets institutional standards for objectivity, evidence, and responsiveness to the study charge. The review comments and draft manuscript remain confidential to protect the integrity of the deliberative process. We wish to thank the following individuals for their review of this report: Joel Darmstadter, Resources for the Future; Clark W.Gellings, Electric Power Research Institute; Robert L.Hirsch, RAND; John Holdren, John F.Kennedy School of Government, Harvard University; James J.Markowsky, American Electric Power Service Corporation (retired); John McTague, Ford Motor Company (retired); Glen R.Schleede, consultant; Frank J.Schuh, Drilling Technology, Inc.; and Lawrence Spielvogel, Lawrence Spielvogel, Inc.

Although the reviewers listed above have provided many constructive comments and suggestions, they were not asked to endorse the conclusions or recommendations nor did they see the final draft of the report before its release. The review of this report was overseen by Harold Forsen of the National Academy of Engineering. Appointed by the National Research Council, he was responsible for making certain that an independent examination of this report was carried out in accordance with institutional procedures and that all review comments were carefully considered. Responsibility for the final content of this report rests entirely with the authoring committee and the institution. 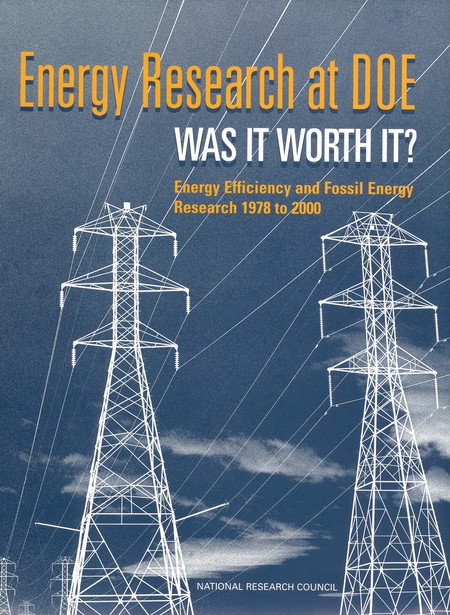 In legislation appropriating funds for DOE's fiscal year (FY) 2000 energy R&D budget, the House Interior Appropriations Subcommittee directed an evaluation of the benefits that have accrued to the nation from the R&D conducted since 1978 in DOE's energy efficiency and fossil energy programs. In response to the congressional charge, the National Research Council formed the Committee on Benefits of DOE R&D on Energy Efficiency and Fossil Energy.

From its inception, DOE's energy R&D program has been the subject of many outside evaluations. The present evaluation asks whether the benefits of the program have justified the considerable expenditure of public funds since DOE's formation in 1977, and, unlike earlier evaluations, it takes a comprehensive look at the actual outcomes of DOE's research over two decades.