Visit NAP.edu/10766 to get more information about this book, to buy it in print, or to download it as a free PDF.
« Previous: The Charge of the Committee
Page 23 Share Cite
Suggested Citation:"The Study Process The Framework for Assessing Causality." Institute of Medicine. 2001. Immunization Safety Review: Thimerosal-Containing Vaccines and Neurodevelopmental Disorders. Washington, DC: The National Academies Press. doi: 10.17226/10208.
×

THIMEROSAL-CONTAINING VACCINES 23 policy, there are clear limits on this element of the charge. For example, it would exceed the committee's authority to recommend a change in the licensure, sched- uling, or administration of a vaccine. If the committee concluded that the scientific evidence or other important factors justified such action, it could recommend con- vening the appropriate advisory groupies) to examine the question. THE STUDY PROCESS The committee held an initial organizational meeting in January 2001. CDC and NIH presented the committee's charge at the meeting, and the committee conducted a general review of immunization safety concerns and determined its methodology for assessing causality. This approach would be used for the hy- potheses to be considered at subsequent meetings. A web site (www.iom.edu/ imsafety) and a listserv were created to facilitate communication with the com- mittee and provide the public access to information about its work. The commit- tee's first report, Immunization Safety Review: Measles-Mumps-Rubella Vaccine and Autism (IOM, 2001), is summarized in Appendix A. To evaluate the hypothesis on thimerosal-containing vaccines and neurode- velopmental disorders, the committee collected information from several sources. An extensive review was performed of the published, peer-reviewed scientific and medical literature pertinent to the hypothesis. A request was also sent through the project's listserv for information regarding specific adverse outcomes that may be related to thimerosal exposure and the biological mechanisms that may explain their hypothesized relationship, the committee reviewed the resulting submissions. In addition, a scientist was commissioned to prepare written an- swers to questions from the committee regarding the toxicity of ethylmercury (Magos, 2001a). This document was made available on the project's website for public review, and critiques of the answers were reviewed during the committee's deliberations. (The committee emphasizes that the commissioned material does not represent the views of the committee, only those of the author.) At an open scientific meeting in July 2001 (see Appendix B), academic and independent researchers, scientists from federal agencies, and representatives of child-health and vaccine-safety advocacy groups gave presentations and offered comments. The formal presentations reviewed the knowledge regarding thimero- sal-containing vaccines and the toxicology of ethyl- and methylmercury. Unpub- lished data shared with the committee through presentations and personal com- munications helped inform the committee's conclusions and recommendations. THE FRAMEWORK FOR ASSESSING CAUSALITY The Immunization Safety Review Committee has adopted the framework for assessing causality developed by the committees previously convened by the IOM (1991a, 1994a) to address questions of vaccine safety. Assessments begin

24 IMMUNIZATION SAFETY RE VIE W from a position of neutrality regarding the specific vaccine safety hypothesis under review. That is, there is no presumption that a specific vaccine (or vaccine component) does or does not cause the adverse event in question. The weight of the available evidence determines whether it is possible to shift that neutral po- sition toward causality ("the evidence favors acceptance of a causal relation- ship") or away from causality ("the evidence favors rejection of a causal rela- tionship"~. The committee does not conclude that the evidence favors rejecting causality merely if the evidence toward causality is inadequate. Table 1 de- scribes the five categories that summarize the direction and strength of the evi- dence for causality. The table shows the differences in the wording of the cau- sality categories in the 1991 and 1994 IOM vaccine safety reports. The wording was revised in the 1994 report because the IOM had found that some people misinterpreted the 1991 language. The types and strength of evidence required to determine a specific level of causal association were the same for the two reports. The Immunization Safety Review Committee is using the wording adopted in 1994. The sources of evidence considered by the committee in its plausibility as- sessment include epidemiological studies, reports of individual cases or series of cases, and studies related to biological plausibility. Epidemiological studies carry the most weight in a causality assessment, these studies measure health- related exposures or outcomes in a defined sample of subjects and make infer- ences about the values of those exposures or outcomes, or the associations among them, in the population from which the study sample was drawn. Epide- miological studies can be categorized as observational (survey) or experimental (clinical trial), and as uncontrolled (descriptive) or controlled (analytic). Among these various study designs, experimental studies generally have the advantage of random assignment to exposures and therefore carry the most weight in as- sessing causality. Uncontrolled observational studies are important but are gen- erally considered less definitive than controlled studies. Case reports and case series are reviewed, although they are generally in- adequate by themselves to establish causality. Despite the limitations of case reports, the causality argument for at least one adverse event (the relationship between vaccines containing tetanus toxoid and Guillain-Barre syndrome) was strengthened most by a single, well-documented case report on recurrence of the adverse event following re-administration of the vaccine, a situation referred to as a"rechallenge" (IOM, 1994a). Evidence regarding biological plausibility is also reviewed. Biological plau- sibility exists on a spectrum, ranging from not plausible to established. The committee has not developed a formal rating system for biological plausibility, because an agreed upon hierarchy of evidence required for assessments of bio- logical plausibility does not exist, nor does an associated terminology (Weed and Hursting, 1998~. Individual researchers and organizations discuss this con- cept differently. It is generally agreed, however, that biological plausibility is a

THIMEROSAL-CONTAINING VACCINES 25 domain of intellectual and research inquiry, requires less stringent standards than proof-of-principle for exploring ideas and possible connections, is usually in itself insufficient to warrant huge investments in research and development, and is clearly insufficient to describe inferences of causality. While evidence regarding biological plausibility can never prove causality, it can be used to support other kinds of evidence and is useful for generating hypotheses, which might be addressed by additional research. Proof-of-principle in biomedical re- search is a more stringent standard by which a biological relationship is judged sufficiently strong to conclude with certainty that agent A (protein, cell, drug, or the like) can lead to result B (biochemical reaction, cell function, symptom re- lief, or the like). Such conclusions may serve as the foundation upon which sub- sequent research seeking to test causality is based. Conclusions about causality have been discussed in other sections of the report and require evidence from human studies. This evidence is, with only rare exceptions, a body of consistent and well-controlled epidemiological research. Published reports that have been subjected to a rigorous peer review process carry the most weight in the committee's assessment. Unpublished data and other reports that have not undergone peer review have value, and they are often considered by the committee, they could be used, for example, in support of a body of published literature with similar findings. If the committee concluded that the unpublished data were well described, had been obtained using sound methodology, and presented very clear results, the committee could report, with sufficient caveats in the discussion, how those data fit with the entire body of published literature. But only in extraordinary circumstances could an unpub- lished study refute a body of published literature. In general, the committee can- not rely heavily on unpublished data in making its plausibility assessment be- cause they have not been subjected to a rigorous peer review process, and therefore must be interpreted with caution. The committee acknowledges that its approach differs from the state of the art for evidence-based reviews of clinical practices in medicine, which does not include consideration of unpublished or non-peer-reviewed information (U.S. Preventive Services Task Force, 1996~. However, the Immunization Safety Re- view Committee was convened specifically to assess topics that are usually of immediate and intense concern. In some cases, the committee's review will take place when data are only beginning to emerge. Thus, given the unique nature of this project, the committee thought it was important to review and consider un- published information. The committee did not perform primary or secondary analyses of unpublished data, however. In reviewing unpublished material, the committee applied generally accepted standards for assessing the quality of sci- entific evidence, as described above. (All unpublished data reviewed by the committee and cited in this report are available in the form reviewed by the committee through the public access files of the National Academies, 202-334- 3543, www.national-academies.org/publicaccess.) 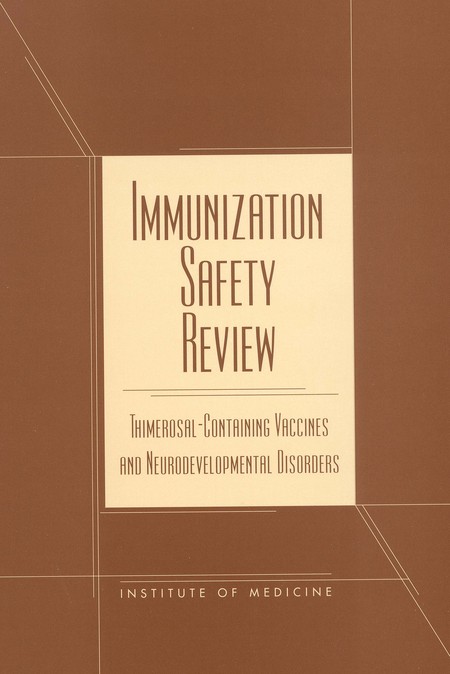 In this report, the Immunization Safety Review committee examines the hypothesis of whether or not the use of vaccines containing the preservative thimerosal can cause neurodevelopmental disorders (NDDs), specifically autism, attention deficit/hyperactivity disorder (ADHD), and speech or language delay.