From Scarcity to Visibility: Gender Differences in the Careers of Doctoral Scientists and Engineers: Summary (2001)

Visit NAP.edu/10766 to get more information about this book, to buy it in print, or to download it as a free PDF.
Page i Share Cite
Suggested Citation:"Front Matter." National Research Council. 2001. From Scarcity to Visibility: Gender Differences in the Careers of Doctoral Scientists and Engineers: Summary. Washington, DC: The National Academies Press. doi: 10.17226/10227.
×

ii NATIONAL ACADEMY PRESS 2101 Constitution Avenue, N.W.Washington, D.C.20418 NOTICE: The project that is the subject of this report was approved by the Governing Board of the National Research Council, whose members are drawn from the councils of the National Academy of Sciences, the National Academy of Engineering, and the Institute of Medicine. The members of the committee responsible for the report were chosen for their special competences and with regard for appropriate balance. This study was supported by a grant between the National Academy of Sciences, the Andrew W.Mellon Foundation, and the National Institutes of Health (Contract No. DHHS P.O. 263- MD-423043). Any opinions, findings, conclusions, or recommendations expressed in this publica- tion are those of the author(s) and do not necessarily reflect the views of the organizations or agen- cies that provided support for the project. Additional copies of this summary are available from Policy and Global Affairs, 2101 Constitution Avenue, N.W., Washington, D.C. 20418; (202) 334â2700; Internet, http://www.nap.edu Printed in the United States of America Copyright 2001 by the National Academy of Sciences. All rights reserved.

Next: Introduction »
From Scarcity to Visibility: Gender Differences in the Careers of Doctoral Scientists and Engineers: Summary Get This Book
× 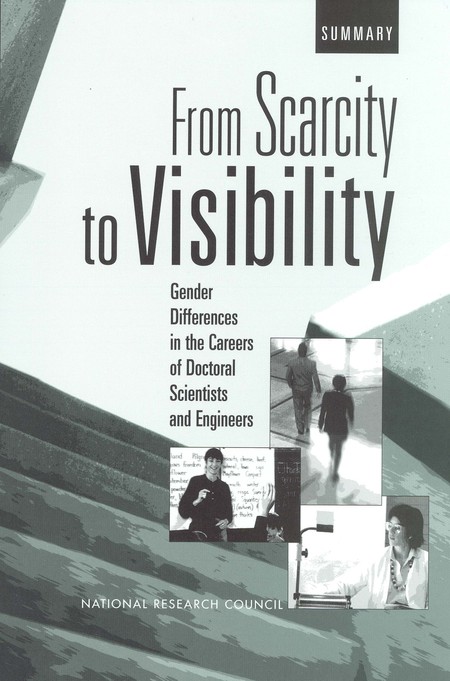