D Site Visit Synthesis D.1 BACKGROUND The committee conducted site visits in a number of places, including Austin, Texas (April 3-4, 2001), Greenville, South Carolna (April 17-18, 2001), San Diego, California (May 2-3, 2001), Blacksburg, Virginia (May 8- 9, 2001), Coral Gables, Florida (May 31, 2001), and various towns in Con- necticut (Reading, Shelton, Bristol, Kent, and Hamden in the period June 1-2, 2001~. During these site visits, members of the committee spoke with students in junior and senior high school, as well as school teachers, ad- ministrators, librarians, and technologists. In addition, the committee spoke with public librarians (branch managers, children's librarians, ref- erence librarians) and technical managers from library systems. When possible, the committee also visited after-school programs and other ven- ues in which young people had Internet access, and spoke with both children and responsible adults. Finally, the committee held a number of open sessions in which parents and other interested parties could talk to the committee. D.2 RECURRING THEMES Though the individuals to whom the committee spoke cannot be taken as being drawn from a representative population, a number of themes did occur repeatedly during the various site visits. · Pornography was a concern of many students and school person- 430

APPENDIX D 431 net, but only one of many. Teachers were more concerned about inaccu- rate and misleading information on the Internet, and with keeping stu- dents in school "on task." Both students and responsible adults were quite concerned about violence (especially "how-to" sites) and hate. · Meeting people face-to-face that one had encountered first online in a chat room or through instant messaging was a standard practice. While only a small a number of students acknowledged having done so, all thought it was an unremarkable, commonplace occurrence. In gen- eral, they recognized in an abstract manner the dangers of doing so, but thought that they could tell if they were dealing with an untrustworthy individual and said that they would never provide personal informa- tion to an individual they regarded as untrustworthy. · High school students expressed a number of common sentiments, including the following: They often needed for research purposes information on Web sites that were blocked by the school filter ("improper blockings. They rarely or never complained to teachers about such blocking because they could get information anyway through home access. Many of the sites improperly blocked by the school were needed for senior high school purposes, but may have been appropriately blocked at the junior high school and elementary school levels. They had been exposed to Internet pornography, especially through spam mail, but had no interest in receiving such mail and deleted it as fast as they could get it. They were not particularly affected by Internet pornography be- cause the entire media environment in which they live is highly sexual- ized. However, a number of students noted that what was upsetting about pornography was not so much the material itself as the likelihood that their parents would "freak out." They were frustrated by losing control of their computers, men- tioning especially spam mail and mouse/rapping. · Most of the schools that the committee visited had installed filters, and many libraries had done so as well. However, when asked what benefit filters offered their schools and libraries, teachers and librarians invariably pointed to the political and management benefits not a single teacher or librarian said that his or her students or patrons were better off with filters in place. The primary political benefit of filters was that they eliminated parental complaints, while the primary management benefit was that they eliminated the need for teachers and students to constantly monitor student and patron usage. In schools, acceptable use policies (AUPs) were also common. How- ever, students received little or no instruction in how to comply with

432 YOUTH, PORNOGRAPHY, AND THE INTERNET them. Students signed AUPs (sometimes with parental signatures re- quired as well), but they noted that the AUPs were just one more form to be filled out at the beginning of the year, and they were not given much attention, were often not even read carefully, and generally were not internalized in any meaningful way. In practice, AUPs seemed to be a tool with which a school could discipline a student for some behavior that was not explicitly forbidden but that nevertheless was inconsistent with school policy. In no school were media literacy and Internet safety part of the formal curriculum. Librarians did note that they spent some time teaching stu- dents how to evaluate sources and credibility, but they were unable to spend more than a class period on this subject in the course of a year. · Most libraries with filters noted that the filters solved problems caused by adults accessing pornography on the Internet on public access terminals and making a nuisance of themselves. Furthermore, they made staff more comfortable, because staff were no longer forced to confront patrons about violations of posted AUPs. Librarians were also concerned with staff having to make value judgments about what is and is not por- nography, particularly when it comes to deciding what a customer can print and receive; they don't want to be "policemen" in the library; they believe the library should be used for educational purposes; and, they don't want to formally monitor what people are doing online. · Both parents and students commented on the gap in knowledge between them. For example, many students reported that they can change their parents' parental preferences (on AOL) for themselves and have access to their parents' accounts, or that their parents don't know what privileges are associated with their screen names. In general, those stu- dents with home access have the most expertise, and hence the most knowledge about how to circumvent adults, know what is available on the net, and know where to find what they should not see. Parents ac- knowledged the knowledge gap as well, pointing out that they were un- comfortable working in an area in which they could not presume superior knowledge and experience and thus did not know how to properly in- struct their children in this area. Moreover, many did not know much about the nature of the issues their children face on the Internet (appar- ently because of the significant differences between using the Internet as a social medium (the experience of their kids) and using it as a business medium (their own experience). In general, the parents to whom the committee spoke understood the responsibility they had as parents to provide supervision. However, they were also aware to some extent that providing supervision does not nec-

APPENDIX D 433 essarily mean that a child will absorb the lessons that such supervision is intended to impart. They understood the time-intensive nature of appro- priate supervision and knew that they (and especially other parents) were unable or unwilling to provide supervision; nevertheless, they generally expressed considerable hesitation to involve the government in this prob- lem (a view that was expressed by both liberal and conservative parents).

Next: Appendix E: Biographies »
Youth, Pornography, and the Internet Get This Book
× 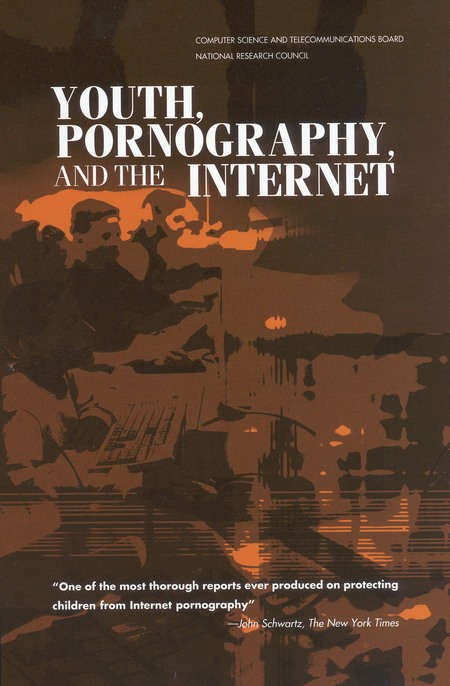 The Internet has changed the way we access the world. This is especially true for kids, who soak up new technologies like eager little sponges. They have access to an enormous array of material, including educational links, sports info, chat rooms—and, unfortunately, pornography. But we must approach our need to protect children with care to avoid placing unnecessary restrictions on the many positive features of the Internet.

Youth, Pornography, and the Internet examines approaches to protecting children and teens from Internet pornography, threats from sexual predators operating on-line, and other inappropriate material on the Internet. The National Research Council’s Computer Science and Telecommunications Board explores a number of fundamental questions: Who defines what is inappropriate material? Do we control Internet access by a 17-year-old in the same manner as for a 7-year-old? What is the role of technology and policy in solving such a problem in the context of family, community, and society?

Providing a foundation for informed debate, this very timely and relevant book will be a must-read for a variety of audiences.