Visit NAP.edu/10766 to get more information about this book, to buy it in print, or to download it as a free PDF.
Page i Share Cite
Suggested Citation:"Front Matter." National Research Council. 2002. Genetic Status of Atlantic Salmon in Maine: Interim Report from the Committee on Atlantic Salmon in Maine. Washington, DC: The National Academies Press. doi: 10.17226/10273.
× 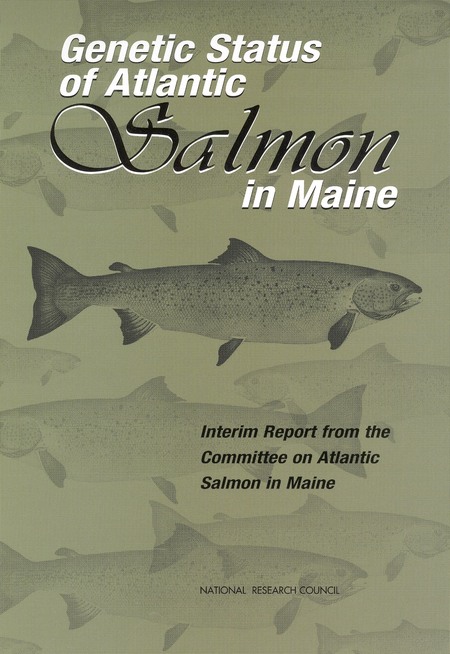 Atlantic salmon in Maine, once abundant but now seriously depleted, were listed as endangered under the federal Endangered Species Act (ESA) in November 2000. The listing covers the wild fish in eight Maine rivers as a single "distinct population segment." The controversy in Maine that accompanied the listing led Congress to request the National Research Council's (NRC's) advice on the science relevant to understanding and reversing the declines in Maine's salmon populations. The charge to the NRC's Committee on Atlantic Salmon in Maine included an interim report focusing on the genetic makeup of Maine Atlantic salmon populations. This is the interim report.

Understanding the genetic makeup of Maine's salmon is important for recovery efforts, because the degree to which populations in Maine differ from adjacent populations in Canada and the degree to which populations in different Maine rivers and tributaries differ from each other affect the choice of recovery options that are most likely to be effective. This report focuses only on questions of genetic distinctiveness. The committee's final report will address the broader issues, such as the factors that have caused Maine's salmon populations to decline and the options for helping them to recover.