Get This Book
Visit NAP.edu/10766 to get more information about this book, to buy it in print, or to download it as a free PDF.
« Previous: Welcome
Page 76 Share Cite
Suggested Citation:"Introduction." National Research Council. 2001. Capitalizing on New Needs and New Opportunities: Government-Industry Partnerships in Biotechnology and Information Technologies. Washington, DC: The National Academies Press. doi: 10.17226/10281.
×

Introduction to the Symposium

Dr. Spencer welcomed participants by observing that the day’s symposium was originally conceived as an examination of the broad area of government-industry partnerships in the health sciences and technology as well as information sciences and technology. In an effort to narrow the symposium’s scope, the STEP Board held a workshop in the summer of 1999 at which it was decided to focus on biotechnology and computing.

The two areas were chosen because of their rapid growth, their large contribution to job creation, and because approximately two-thirds of the nation’s research and development (R&D) budget of $225 billion is spent in these two sectors. The R&D investment in biotechnology and computing is growing more rapidly than R&D investment in the country as a whole. The role of the government, industry, and universities is different in the biotechnology and computing industries. There are, however, areas for potential interdependencies and areas for synergy.

The deliberations of the symposium form the basis of the report herein by the STEP Board containing formal findings and recommendations. Echoing Dr. Jorgenson’s statements, Dr. Spencer encouraged the audience to offer questions and suggestions as the day progressed, as this input would aid the STEP Board in developing its recommendations.

Dr. Spencer then introduced the day’s keynote speaker, Congressman Sherwood Boehlert (R-NY). As a senior Republican Member on the House Committee on Science, Rep. Boehlert is well positioned to comment on and pose ques-

tions about the topics of the symposium. First elected in 1982, Rep. Boehlert has concentrated on what he calls “the three E’s” —education, the environment, and the economy. Among his many distinctions, Rep. Boehlert has become a respected voice for environmental protection in his state as well as the nation at large. By virtue of his thoughtfulness and seniority, he has also become a positive force for the nation’s scientific enterprise.

Next: Opening Remarks »
Capitalizing on New Needs and New Opportunities: Government-Industry Partnerships in Biotechnology and Information Technologies Get This Book
× 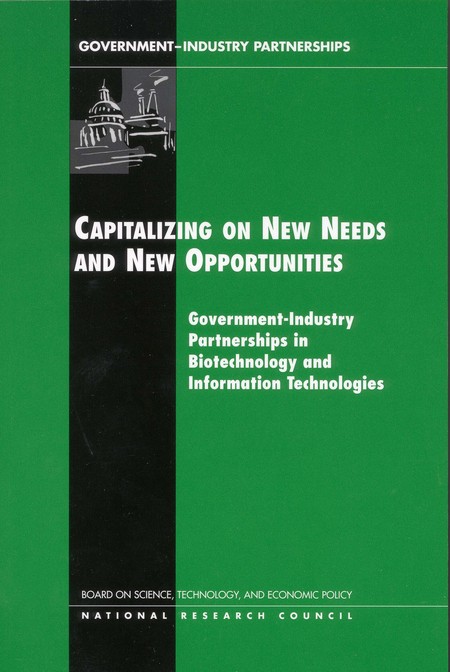 This report addresses a topic of recognized policy concern. To capture the benefits of substantial U.S. investments in biomedical R&D, parallel investments in a wide range of seemingly unrelated disciplines are also required. This report summarizes a major conference that reviewed our nation's R&D support for biotechnology and information technologies. The volume includes newly commissioned research and makes recommendations and findings concerning the important relationship between information technologies and biotechnology. It emphasizes the fall off in R&D investments needed to sustain the growth of the U.S. economy and to capitalize on the growing investment in biomedicine. It also encourages greater support for inter-disciplinary training to support new areas such as bioinformatics and urges more emphasis on and support for multi-disciplinary research centers.