Get This Book
Visit NAP.edu/10766 to get more information about this book, to buy it in print, or to download it as a free PDF.
« Previous: Keynote Address: Inroads to Animal Conservation
Page 7 Share Cite
Suggested Citation:"1 Landmark and Historic Contributions of Animal Nutrition." National Research Council. 2001. Scientific Advances in Animal Nutrition: Promise for the New Century: Proceedings of a Symposium. Washington, DC: The National Academies Press. doi: 10.17226/10299.
×

The origins of the National Research Council’s (NRC) Committee on Animal Nutrition (CAN) are embedded among the hardships of the Civil War and World War I and governmental attempts to ameliorate their effects upon national resources and the lives of Americans. The National Academy of Sciences (NAS) was mandated by Congress to enlist the brightest scientists and engineers in an honorary, non-governmental, nonprofit organization intended to serve the welfare of the United States of America and its people. Its charter was signed by President Abraham Lincoln in 1863.

Although NAS membership grew over the years to over 1,600 today, the number of persons available to offer counsel on issues of national import to government agencies or to other organizations seeking assistance was seldom adequate to the task. In 1916, a year before the United States entered World War I, President Woodrow Wilson asked the Academy to broaden its services, assist in military preparedness, and develop an organization of full-time employees to aid NAS scientists in preparing their reports for the government in a timely fashion.

Thus, the NRC was established as the working arm of the National Academies. Shortly thereafter, the NRC appointed an Agriculture Committee to deal with burgeoning needs for food and fiber. This was an exciting era in nutrition. One of the first compounds in a new class of nutrients had just been

discovered and named vitamine, an amine vital for life. Later, this compound was renamed thiamin(e), and the term “vitamin” was applied to the whole nutrient class because all vitamines were not amines (Gubler, 1991). Dozens of talented specialists—among them nutritionists—were called upon to volunteer their services to the NRC, and almost immediately, the significance of animal nutrition became apparent.

In 1917, the Agriculture Committee of NRC organized a Subcommittee on Protein Metabolism in Animal Feeding chaired by Dr. Henry P. Armsby, Director of the Institute of Nutrition, Pennsylvania State College. The subcommittee produced a seven-page document entitled Plan for Cooperative Experiments on Protein Requirements for Growth in Cattle (National Research Council, 1917) to help resolve unanswered questions dealing with the minimum dietary nitrogen levels required to maximize productivity of cattle while minimizing usage of the supplemental proteins that were in short supply.

Following discharge of the Committee on Food and Nutrition in 1928, the Committee on Animal Nutrition was formed, and it has now been a standing committee of the NRC for over 70 years. Dr. Paul E. Howe, a nutritional biochemist with the Bureau of Animal Industry, U.S. Department of Agriculture, chaired the committee until 1941.

The early years of CAN's service coincided with the depression of the late 1920s and 1930s. Many farm families did not have electricity in their homes. There was much suffering in rural America, not for lack of electricity, but because commodity prices were so low. Farmers also were discouraged because of the long period of drought in the Central and Southern Plains — the dust bowl. Serious problems both with the welfare of our people and the welfare of our food production system were rapidly developing.

But many exciting discoveries also were taking place. During this period, riboflavin, pantothenic acid, niacin, vitamin B6, vitamin K, cobalt, and certain fatty acids were identified as essential nutrients. And these new bits of

information arrived just in time for the critical changes in animal management required by the circumstances surrounding the Second World War.

IDENTIFYING ALTERNATIVE SOURCES OF NUTRITION FOR ANIMALS AND HUMANS

As the United States was drawn into the international conflict, all sorts of items used domestically were in short supply, and many had to be reserved for military use. And because fewer people were left to serve in the productive parts of our economy, fewer people had to do more with less. Fish oil supplies that had been used to provide vitamin A in both human and animal diets were diminished. Skim milk that had been incorporated extensively into animal diets for protein, minerals, and vitamins was diverted for human use. Byproducts of meat processing, such as tankage and meat scraps, that were traditional sources of supplemental protein in animal diets often were not available. As a consequence, alternative sources of protein, minerals, and vitamins had to be identified.

Fortunately, the nutritionists and biochemists working on minerals, vitamins, and amino acids provided information vital for this purpose, and just in time. It was soon apparent that corn and soybean meal appropriately supplemented with minerals and vitamins could efficiently and economically replace the previously used more complex diets containing animal byproducts.

PROVIDING ANSWERS TO PROBLEMS OF WAR

The publications of CAN, during the 1940s, related to the problems of the time. War emergency plans for feeding cattle, poultry, and swine were devised by nutritionists who served on CAN. Because of phosphorus shortages, alternative sources were being used in animal diets, and a fluoride hazard in those alternatives was identified and quantified. In addition, the need for supplemental iodine was established as animal proteins were dropped from animal diets. Through the work of nutritionists serving as the nation’s experts on CAN, the U.S. population was assured that the problem of restricted animal feed supplies was by no means insurmountable.

successful practical experience. Feed formulators tended to add safety factors of their own, and since judgments differed in this regard, final products were appreciably different in their nutrient concentrations.

In the late 1940s, CAN concluded that the most appropriate way to express a nutrient requirement was as the minimal dietary concentration required to support normal performance of the most demanding function. Nutrient requirements were commonly established using purified diets. Unfortunately, nutrients in natural-ingredient diets are not usually as available as they are in purified diets. Thus, it was necessary, when possible, to provide some estimate of expected nutrient bioavailability in natural dietary ingredients. Since 1953, the NRC Nutrient Requirement Series presents nutrient requirements that are supported by scientific evidence or indicates that requirements are estimates.

Individual publications in the Nutrient Requirement Series on food-producing animals have been regularly updated for many years. For example, there have been 10 editions of Nutrient Requirements of Swine from 1944 to 1998. The length of this report has grown from 10 to 189 pages and the references from 69 to 1,524. The first edition included recommended allowances for total digestible nutrients (TDN), crude protein, calcium, phosphorus, sodium, potassium, thiamin, riboflavin, niacin, pantothenic acid, vitamin B6, carotene, vitamin A, and vitamin D (National Research Council, 1944). Minimum requirements for these nutrients (except TDN) plus chloride, iron, copper, manganese, iodine, selenium, vitamin E, vitamin K, biotin, folacin, vitamin B12, ten essential amino acids, linoleic acid, digestible energy, and metabolizable energy are included in the 10th edition (National Research Council, 1998).

Publications in the Nutrient Requirement Series and CAN reports on feed composition, vitamin and mineral tolerances, energy terms, nutrients and toxins in water, selenium, and chromium have had a major influence upon the productivity and health of animals on the farms and in the homes, laboratories and zoos of America. These reports provide information and guidelines that not only are used by animal nutritionists but also have been adopted by federal and state regulatory agencies. Some of the requirement reports now provide computer-based mathematical models to predict feed intake and growth rates by melding nutrient requirements with desired animal performance. These are major advances in animal nutrition, but prediction models must be based on a

foundation of substantial scientific data. Mathematical equations are not a substitute for the basic information necessary to develop them, and the animal nutrition community is actively engaged in identifying and producing the needed data.

Throughout its history, the service of nutritionists on CAN has been pro bono. Scientists are selected by their peers, based on demonstrated professional qualifications, judgment, and ethics. They come from universities, industry, and government. In total, 117 scientists have served on the Committee, not counting the hundreds that have served on various CAN subcommittees and task forces. There are typically 10 to 15 members of CAN, serving staggered 3-year terms. Since 1941, there have been 12 CAN chairpersons.

The collective effort of the wide array of scientists and nutritionists who have been appointed to serve on CAN committees and subcommittees has contributed invaluably to the social, economic, and physical well-being of Americans throughout CAN’s history. This effort also has provided information essential to the welfare, productivity, and protection of domestic and wild animal species. A former NRC staff officer, Selma Baron, may have said it best —

“The changes that have occurred since the inception of reports on the nutrient requirements of domestic animals reflect how the lives of all Americans have been altered during the past 70 years. From the rudimentary pencil and paper calculations of essential nutrients to the use of computers to generate requirements at various stages of the life cycle, the data developed by species subcommittees of the Committee on Animal Nutrition have provided essential information to those who raise animals for food, as companion animals, and for use in research. The mechanisms for report generation may have changed, but the dedication of the animal nutritionists and other scientists has not. Their willingness to devote hours to the Committee on Animal Nutrition in preparing reports for public distribution has enriched all our lives.”

Next: 2 Protecting Animal Health and Well-being Nutrition and Immune Function »
Scientific Advances in Animal Nutrition: Promise for the New Century: Proceedings of a Symposium Get This Book
× 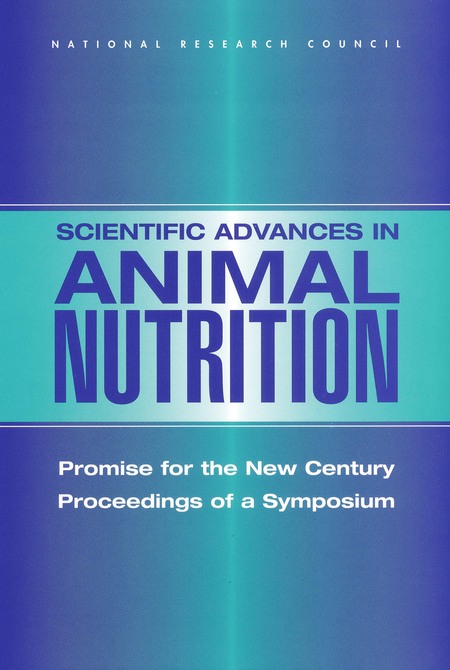