Visit NAP.edu/10766 to get more information about this book, to buy it in print, or to download it as a free PDF.
Page i Share Cite
Suggested Citation:"Front Matter." National Research Council. 2002. High-Impact Terrorism: Proceedings of a Russian-American Workshop. Washington, DC: The National Academies Press. doi: 10.17226/10301.
×

NATIONAL ACADEMY PRESS · 2101 Constitution Avenue, N.W. · Washington, DC 20418 NOTICE: The project that is the subject of this report was approved by the Governing Board of the National Research Council, whose members are drawn from the councils of the National Academy of Sciences, the National Academy of Engineering, and the Insti- tute of Medicine. The members of the committee responsible for the report were chosen for their special competences and with regard for appropriate balance. This study was supported by Grant No. B7075 between the National Academy of Sciences and the Carnegie Corporation of New York. Any opinions, findings, conclu- sions, or recommendations expressed in this publication are those of the authorts) and do not necessarily reflect the views of the organizations or agencies that provided support for the project. International Standard Book Number 0-309-08270-6 Library of Congress Catalog Card Number 2002102001 A limited number of copies of this report are available from: Development, Security, and Cooperation National Research Council, FO 2060 2101 Constitution Avenue, NW Washington, DC 20418 Tel: (202) 334-2644 Additional copies of this report are available for sale from: National Academy Press 2101 Constitution Avenue, NW, Lockbox 285 Washington, DC 20055 Tel: (800) 624-6242 or (202) 334-3313 (in the Washington metropolitan area) Internet, http://www.nap.edu Printed in the United States of America Copyright 2002 by the National Academy of Sciences. All rights reserved.

Preface In June 1999, the presidents of the National Academy of Sciences (NAS) and the Russian Academy of Sciences (RAS) agreed that a joint project on combating especially dangerous crimes, particularly terrorism, would be of considerable interest to both Russian and American specialists in a variety of fields. The president of the NAS requested the president of the National Academy of Engi- neering (NAB) to assume responsibility for developing and implementing the project. Representatives of the RAS and NAE decided that a bilateral interacademy workshop on the topic of high-impact terrorism would be a good first step in carrying out such a project. The Carnegie Corporation of New York has been very interested in enhancing Russian capabilities to address terrorist threats and provided the funds required for the workshop. The workshop was held in Moscow on June 4-6, 2001. A number of Russian governmental and academic organizations with responsibilities and interests in the field accepted the invitation from the RAS to participate in the workshop, and Russian specialists with a variety of backgrounds made presentations at the work- shop. Several dozen other Russian specialists attended the sessions, and their comments greatly enriched the discussions. The NAE selected eight American specialists to make presentations on governmental and nongovernmental experi- ences in the United States in the fight against terrorism. Some of the presentations by Russian and American specialists reflected a remarkable degree of similarity in views on the terrorist threat (e.g., radiological terrorism, agricultural terror- ism), while others indicated different levels of appreciation of vulnerabilities and response requirements (e.g., the long-term Russian attention to protection of industrial facilities, the extensive American concern over cyberterrorism). The . . via

. . . vile PREFACE agenda for the workshop and the written presentations comprise the body of this report. We will not attempt to summarize the papers or the discussions here, but simply note that the workshop provided an excellent forum for informative dis- cussion and exchange of ideas on the broad topic of high-impact terrorism. The statements made in the enclosed papers are those of the individual authors and do not necessarily represent positions of The National Academies. ACKNOWLEDGMENTS This proceedings has been reviewed in draft form by individuals chosen for their technical expertise, in accordance with procedures approved by the NRC' s Report Review Committee. The purpose of this independent review is to provide candid and critical comments that will assist the institution in making its pub- lished proceedings as sound as possible and to ensure that the proceedings meets institutional standards for quality. The review comments and draft manuscript remain confidential. We wish to thank the following individuals for their review of papers in this proceedings: Vinton G. Cerf, WorldCom; David R. Franz, South- ern Research Institute; Charles T. Owens, Civilian Research and Development Foundation; Suzanne E. Spaulding, formerly Executive Director of the National Commission on Terrorism; Roger L. Schneider, Rho Sigma Associates, Inc.; and Alvin W. Trivelpiece, formerly Director of Oak Ridge National Laboratory. Although the reviewers listed above have provided many constructive com- ments and suggestions, they were not asked to endorse the content of the indi- vidual papers, nor did they see the final draft of the proceedings before its release. The review of this proceedings was overseen by Marilyn Baker of the National Research Council. She was responsible for making certain that an independent examination of this report was carried out in accordance with institutional proce- dures and that all review comments were carefully considered. We wish to thank Rita S. Guenther, Rita Kit, Kelly Robbins, and A. Chelsea Sharber for their translation of the Russian language papers into English. Special thanks also to Florence Poillon, Kelly Robbins, and A. Chelsea Sharber for editing of the proceedings. SIEGFRIED S. HECKER Chair, NRC Committee on Confronting Terrorism in Russia GLENN E. SCHWEITZER Director, Office for Central Europe and Eurasia, NRC

Next: Opening Remarks »
High-Impact Terrorism: Proceedings of a Russian-American Workshop Get This Book
× 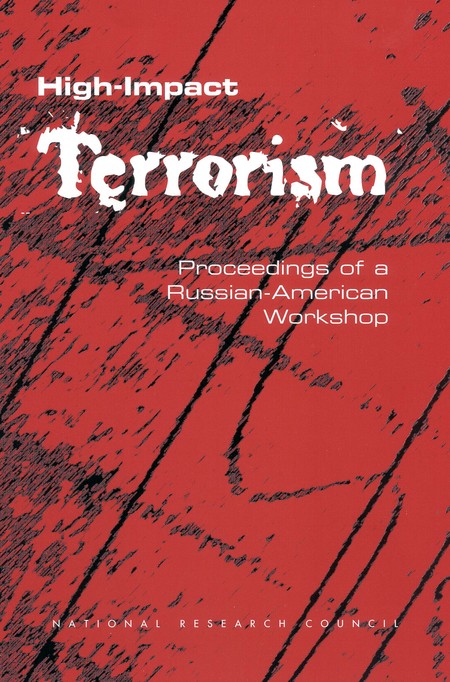 In June 2001 the National Academies and the Russian Academy of Sciences held a bilateral workshop in Moscow on terrorism in a high--technology society and modern methods to prevent and respond to it. The purpose of the workshop was to begin a dialogue on high--impact terrorism that could lead to further U.S.--Russian collaboration. This volume includes papers presented at the workshop by 31 Russian and American experts on various types of high-impact terrorism, including biological and agricultural terrorism, nuclear and electromagnetic terrorism, explosives, chemical, and technological terrorism, and cyber terrorism. The papers also address legal issues, Russian internal affairs, and the future of international cooperation in this area.