Get This Book
Visit NAP.edu/10766 to get more information about this book, to buy it in print, or to download it as a free PDF.
Page i Share Cite
Suggested Citation:"Front Matter." National Research Council. 2002. Natural Disasters and Energy Policy: A Summary of the Forum on Natural Diasters and Energy Policy, June 12, 2001, Washington, DC. Washington, DC: The National Academies Press. doi: 10.17226/10303.
×

A SUMMARY OF THE FORUM ON NATURAL DISASTERS AND ENERGY POLICY, JUNE 12, 2001, WASHINGTON, DC

A SUMMARY TO THE NATURAL DISASTERS ROUNDTABLE

UNIVERSITY OF MASSACHUSETTS, AND

This report is funded in part by the National Oceanic and Atmospheric Administration (Task order 56-DKNA-0-95111); Federal Emergency Management Agency (EMW-2001-SA-0051); Institute for Business and Home Safety, National Aeronautic and Space Administration (W-24245); Pacific Gas & Electric; and EPRI (EP501 0000002689). The views expressed herein are those of the author and do not necessarily reflect the views of NOAA, FEMA, IBHS, NASA, PG&E, EPRI, or any of their subagencies.

Supported by the U.S. Geological Survey, Department of the Interior, under assistance award No. 00HQAG0205. The views and conclusions contained in this document are those of the author and should not be interpreted as necessarily representing the official policies, either expressed or implied, of the U.S. Government.

Advisors to the Nation on Science, Engineering, and Medicine

The Natural Disasters Roundtable (NDR) seeks to facilitate and enhance communication and the exchange of ideas among scientists, practitioners, and policymakers concerned with urgent and important issues related to natural disasters. Roundtable meetings are held three times a year in Washington, DC. Each meeting is an open forum focused on a specific topic or issue selected by the NDR Steering Committee.

For more information on the Roundtable visit our website: http://national-academies.org/naturaldisasters or contact us at the address below.

Although the reviewers listed above have provided many constructive comments and suggestions, they did they see the final draft of the report before its release. The review of this report was overseen by William L. Fisher, University of Texas, Austin . Appointed by the National Research Council, he was responsible for making certain that an independent examination of this report was carried out in accordance with institutional procedures and that all review comments were carefully considered. Responsibility for the final content of this report rests entirely with the authoring committee and the institution. 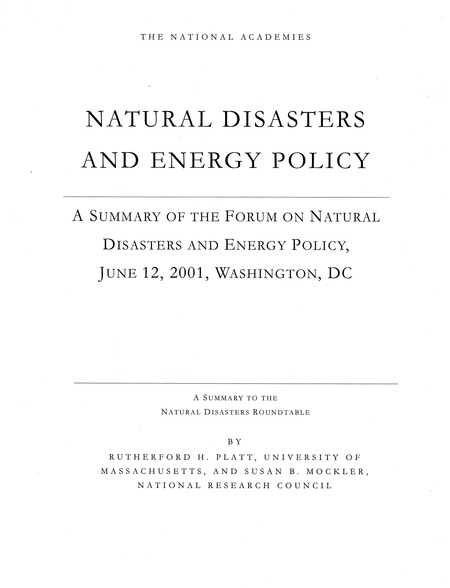