Get This Book
Visit NAP.edu/10766 to get more information about this book, to buy it in print, or to download it as a free PDF.
« Previous: 5 - Summary Assessment and Advice
Page 116 Share
Suggested Citation:"Afterword: Small Aircraft Transportation System and Aviation Security." Transportation Research Board. 2002. Future Flight: A Review of the Small Aircraft Transportation System Concept -- Special Report 263. Washington, DC: The National Academies Press. doi: 10.17226/10319.
×

Much has changed in the U.S. aviation sector since the September 11, 2001, terrorist hijackings of four U.S. jet airliners, and much remains in flux. At the time of the committee’s final meeting, only weeks after the hijackings, the federal government had imposed emergency air traffic control rules restricting where pilots can fly, the operating procedures they must follow, and the kinds of flying activities they can undertake in designated areas. Thirty metropolitan areas were designated as having “enhanced” Class B terminal airspace1 and were thus subject to additional operating restrictions on the airspace directly above and below the normal Class B structure. Most private aircraft flight operations were suspended in the enhanced Class B airspace over the Washington, D.C., New York City, and Boston metropolitan areas, while in 27 other metropolitan areas private aircraft operations were modified through requirements for the use of transponders and limitations on certain kinds of visual flight rule (VFR) operations. In addition, most foreign-registered aircraft were barred from operating under VFR in U.S. airspace.2

Most of these restrictions were lifted later in the year, although concerns remain over the use of aircraft, large and small, as a means of carrying out terrorist attacks. Whether these concerns subside will depend in large part on the nation’s ability to counter the terrorist threat in general. Nevertheless, it seems reasonable to anticipate

Specific restrictions on aviation will undoubtedly change in response to evolving security concerns. In all likelihood, elevated concerns over security will influence not only operations but also the kinds of technologies being funded and developed and how they are applied in both commercial and general aviation.

In light of these new aviation security concerns, a number of additional questions arise with regard to the Small Aircraft Transportation System (SATS) concept and the technological capabilities being pursued to advance it. Among them are the following:

As difficult as it is to foresee how today’s aviation system will adapt to security concerns, it is even more difficult to anticipate how future aviation technologies and systems will be influenced by such concerns. For example, certain capabilities, such as highway-in-the-sky navigation systems, could prove helpful in ensuring secure flight operations by providing a means for operators to report and adjust their flight plans on a more timely basis, fly their courses more accurately, and obtain updated information on restricted and prohibited airspace for safe and predictable course adjustments. Alternatively, technologies that make it easier to fly may allow more people to operate aircraft for illegal and illegitimate purposes.

The attacks of September 11 and their uncertain ramifications underscore the difficulty of making accurate predictions of change in the aviation sector. Other major developments in aviation in recent decades, from the precipitous decline in demand for new GA aircraft to the emergence of hub-and-spoke operations after deregulation (which have had major implications for the kinds of aircraft used by airlines and the demands placed on air traffic control), have occurred almost entirely unexpectedly. Other unanticipated changes will undoubtedly follow. The aviation sector has always been highly dynamic and dependent on aggressive technology research and development. Such characteristics make the sector unsuited to a high level of specificity in long-range planning. 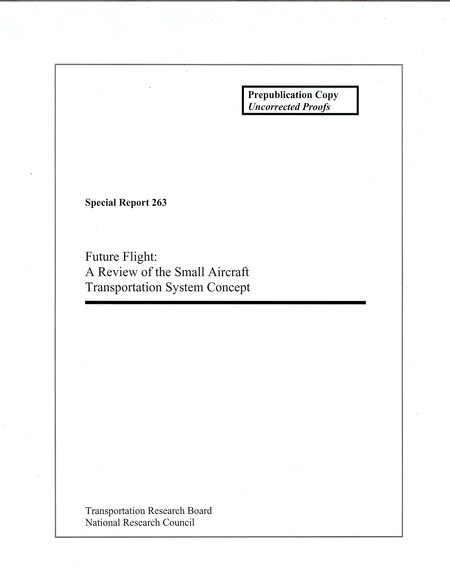