Chapter:HIGHER ORDER SKILLS: A WORKING DEFINITION AND A HISTORICAL PERSPECTIVE

Visit NAP.edu/10766 to get more information about this book, to buy it in print, or to download it as a free PDF.
« Previous: INTRODUCTION
Page 2 Share Cite
Suggested Citation:"HIGHER ORDER SKILLS: A WORKING DEFINITION AND A HISTORICAL PERSPECTIVE." National Research Council. 1987. Education and Learning to Think. Washington, DC: The National Academies Press. doi: 10.17226/1032.
×

2 EDUCATION AND LEARNING TO THINK teaching students the kinds of things that appear on these tests? What about artistic creativity and interpretive skill, and the ability to find and refine problems as well as to solve those others have set? And, perhaps most troubling of all, do any of these "intellectuals' concerns really have much to do with what the vast majority of students will do in their work and personal lives after school? Do the higher order skills needed on the job or in the exercise of one's rights and duties as a citizen really depend on the kinds of abilities educators and the academic community are discussing? Mingled with the difficulty of defining higher order skills is the troubling sense that there may, in fact, be little new to say about the topic. Inevitably, we hear the question: Is there really anything new about schools' trying to teach higher order skills? Haven't schools always hoped to teach students to think critically, to reason, to solve problems, to interpret, to refine ideas and to apply them in creative ways? Most of us can remember a teacher who inspired us personally in these directions, and schools everywhere include such aspirations in their statements of goals. Nevertheless, we seem to agree that stu- dents do not adequately learn these higher order abilities. Perhaps the fact that our schools have been less than successful at meeting these goals means that we have simply given up the old truths in education. Perhaps if we went back to old-fashioned courses and old- fashioned methods, the problem of teaching higher order skills would be solved without further special attention. Or, more pessimistically, perhaps we should conclude that decades of trying unsuccessfully to teach higher order skills in school show that such goals are not reach- able; perhaps higher order abilities develop elsewhere than in school, and it would be wisest for schools to concentrate on the "basics," letting higher order abilities emerge later or under other auspices. To consider these fundamental questions, we need a working definition of higher order skills and an understanding of their historical role in American schools. HIGHER ORDER SKII14S: A WOR1LING DEFINITION AND A HISTORICAL PERSPECTIVE Thinking skills resist the precise forms of definition we have come to associate with the setting of specified objectives for schooling. Nevertheless, it ~ relatively easy to list some key features of higher order thinking. When we do this, we become aware that, although

4 EDUCATIONAND LEARNING TO THINK been books and writing, there also have been schools and related institutions established to train an intellectual elite, drawn largely from privileged social strata, in capabilities of reasoning, rhetoric, mathematical and scientific thought, and other skills that today carry the higher order label. These were state, private, and religious institutions with, over the centuries, extremely varied ideas of how to go about the educational task. All were highly selective institutions. A minority of the population attended them, and this minority was selected at least in part on the basis of a taste for academic learning and the ability to perform well in a very special kind of institution. In America, various Academies, some private and some public, carried on this tradition through the nineteenth century and into the twentieth. Until they began to be transformed early in this century, even public high schools were in the academy mold. Only a minority of young people attended or even thought of attending them. There were entrance examinations. The curriculum was quite strictly academic. Extensive writing, textual criticism, and the like were expected. Although today we might not recognize nineteenth-century academy curricula as promoting creative thinking or independent problem solving, the elite academies expected to produce, and to a considerable extent succeeded in producing, intellectual performance beyond the ordinary. Historically, it must be stressed, the academies did not treat education of the full population of young people as within their purview. Schools for the masses arose from different roots and are a much more recent phenomenon in the history of education. Mass education derives from a "low literacy tradition (Resnick and Resnick, 1977) aimed at producing minimal levels of competence in the general population. It originated in Europe in Reformation and counter-Reformation efforts to produce a literate, catechism- and bible-reading population. During the nineteenth century, mass schooling was adopted as part of a new national agenda in coun- tries that were just beginning to form citizen armies and to impose common language ant] culture on their populations. In the United States, village and township schools were established early, probably reflecting radical Protestant traditions as well as new definitions of citizenship appropriate to the new nation. Throughout the nine- teenth century, this nation knew levels of school attendance ancI literacy ahead of most other countries, despite the continuing flow of poor and poorly educated immigrants. As cities began to grow,

LA UREN B. RESNICK s massive urban school systems grew as well. Only racial minorities were systematically excluded or separated within the schools. The mass education system that evolved under these circum- stances focused largely on elementary schooling, and rather sharp di- visions between elementary and secondary education persisted. This distinction was apparent both in who went to school and in what was taught. Almost everyone went to elementary school, although a limited number finished the entire eight-year course. Only a few went to high school or its equivalent. The elementary schools served the masses and concerned themselves with basic skills of reading and computation, with health and citizenship training, and the like. Rou- tinized performance rather than creative and independent thought was stressed. Mass education was, from its inception, concerned with inculcating routine abilities: simple computation, reading pre- dictable texts, reciting religious or civic codes. It did not take as goals for its students the ability to interpret unfamiliar texts, create material others would want and need to read, construct convincing arguments, develop original solutions to technical or social problems. The political conditions under which mass education developed en- couraged instead the routinization of basic skills as well as the stan- dardization of teaching and education institutions. Standardization was a means of ensuring that at least minimal curriculum standards would be met, that teachers would be hired on the basis of com- petency for the job rather than political or familial affiliation, and that those responsible for the expenditure of public funds could ex- ercise orderly oversight over the educational process. Standardized testing was one of the methods developed to exercise oversight and centralizer! control of the schools (Resnick, 1980~. Early in the twentieth century, the institutional division between routine-oriented elementary schools and secondary academies in the high literacy tradition began to dissolve. Responding to changing economic and social conditions, more and more young people began to seek high school education, and educators gradually began to treat secondary education of a much larger and more varied population as being their proper concern. The secondary schools were over the next decades to become the mass institutions the elementary schools had been. The growth of this new secondary school population marked the beginning of a debate that continues even today. This debate concerns what the appropriate curriculum ought to be for secondary schools designed to serve everyone. The terms of the debate were set,

6 EDUCATION AND LEARNING TO THINK in great part, by a National Education Association (NEA) commis- sion report entitled The Cardinal Principles of Secondary Education (Bureau of Education, 1918~. The report provided a theory and ideology for the place of a vocationally oriented curriculum in the high school as part of a diversified secondary program adapted to different types of students. This represented a clear challenge to the older ideology that organized the high school curriculum around a common core of the traditional liberal disciplines. The tension between vocationaTism and traditional disciplines as the center of the high school program has never been resolved. Responding to post-WorId War II manpower needs, the 1950s and early 1960s saw a greater emphasis on traditional disciplines, espe- cially mathematics and science. Yet political and social pressures from many quarters sustainer] the demand for vocational training and other programs designed to keep students in school as Tong as possible. Other developments in the later 1960s and 1970s led to a near-complete abandonment of the traditional core curriculum, even for students who had been its traditional consumers. Schools con- tinued to require academic courses, but the requirements were often minimal and course content focused increasingly on application and practical topics-often replacing more traditional, demanding mate- riaI. Written composition and other activities that engaged higher order skills all but disappeared from the curriculum. The eject of all of this has been to reduce, and sometimes to drive out of existence, the high literacy goals that had been the focus of the academies and their preparatory institutions. Yet the taste for such goals has survived and can be seen in recent efforts to revive interest in higher order skills teaching. This revival, however, takes place in an educational and social context that dictates an extension of high literacy goals to a much broader segment of the population than has ever before been considered capable of such learning. Today, we are committed to educating all Americans in the secondary schools and a large proportion (higher than in any other country in the worId) in some form of postsecondary institution. These students' educa- tional needs cannot be met by traditional vocational programs that no longer prepare students for productive participation in an increas- ingly diversified economic environment. Employers today complain that they cannot count on schools arid colleges to produce young people who can move easily into more complex kinds of work. They seem to be seeking general skills such as the ability to write and speak effectively, the ability to learn easily on the job, the ability to use

Next: THE NATURE OF THINKING AND LEARNING: GOING BEYOND THE ROUTINE »
Education and Learning to Think Get This Book
× 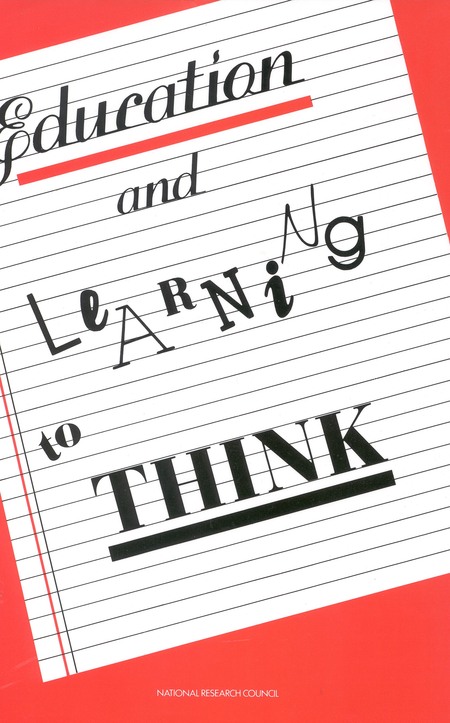