Get This Book
Visit NAP.edu/10766 to get more information about this book, to buy it in print, or to download it as a free PDF.
« Previous: 5 MANAGEMENT OF RIPARIAN AREAS
Page 425 Share Cite
Suggested Citation:"APPENDIX A: COMMITTEE MEMBER AND STAFF BIOGRAPHIES." National Research Council. 2002. Riparian Areas: Functions and Strategies for Management. Washington, DC: The National Academies Press. doi: 10.17226/10327.
×

Mark M. Brinson, Chair, is a professor of ecology at East Carolina University. His research focuses on wetland ecosystem structure and function, tidal and nontidal marshes, and riverine and fringe forested wetlands. Dr. Brinson interacts extensively with federal and state government agencies in providing advice on wetland issues, participating in training courses, testifying at congressional hearings, and guiding research priorities and directions. He received his B.S. from Heidelberg College, his M.S. from the University of Michigan, and his Ph.D. in botany from the University of Florida. Dr. Brinson was a member of the NRC Committee on Characterization of Wetlands.

Lawrence J. MacDonnell, Vice-Chair, is an environmental and natural resources attorney with the firm of Porzak, Browning & Bushong in Boulder, Colorado. His practice emphasizes water law and the Endangered Species Act. He is active in several nonprofit organizations involved in community-based conservation in Colorado. Between 1983 and 1994, he served as the initial director of the Natural Resources Law Center at the University of Colorado School of Law, where he also taught courses in environmental and natural resources law. His most recent book is From Reclamation to Sustainability: Water, Agriculture, and the Environment in the American West. He is a past president of the Colorado Riparian Association. Dr. MacDonnell served on the NRC Committee on the Future of Irrigation. He received his B.A. from the University of Michigan, his J.D. from the University of Denver, and his Ph.D. from the Colorado School of Mines.

Douglas J. Austen is head of the Watershed Management Section for the Illinois Department of Natural Resources. His work involves directing an interagency watershed program that involves planning, implementation, and assessment of a wide variety of land and aquatic management practices in four paired watersheds located throughout Illinois. Dr. Austen also coordinates the assessment of the Illinois River Conservation Reserve Enhancement Program (CREP), he supports ecosystem restoration efforts throughout the state, and he co-developed the Illinois Watershed Academy. He also has extensive experience and has authored publications on fisheries management, natural resources information systems, sampling, and aquatic ecology. Dr. Austen received his B.S. from South Dakota State University, M.S. from Virginia Polytechnic Institute and State University, and Ph.D. from Iowa State University in Animal Ecology.

Robert L. Beschta is an emeritus professor of forest hydrology at Oregon State University. He received his B.S. from Colorado State University, his M.S. from Utah State University, and his Ph.D. in watershed management from the University of Arizona. Dr. Beschta’s research interests include forest hydrology, forestland use and water quality, riparian area management, and channel morphology. In particular, he studies large organic debris and channel morphology; hillslope hydrology; road drainage; the effects of mass soil movements upon channel characteristics; how sediment is stored along stream channels and released during high stream flow events; and interactions of stream and subsurface water in eastern Oregon. Dr. Beschta served on the NRC Committee on the Protection and Management of Pacific Northwest Anadromous Salmonids.

Theo A. Dillaha is a professor of biological systems engineering at the Virginia Polytechnic Institute and State University. His research interests include environmental engineering, functioning of riparian buffer zones, water-quality modeling, nonpoint source pollution control, TMDLs, and water supply and sanitation in developing countries. He has published extensively on the abilities of grass buffer strips to remove nutrients, sediment, and bacteria from overland flow. Dr. Dillaha received his B.E. and M.S. in environmental and water resources engineering from Vanderbilt University and his Ph.D. in agricultural engineering from Purdue University.

Debra L. Donahue is a professor of law at the University of Wyoming. She received her B.S. in wildlife science from Utah State University, her M.S. in wildlife biology from Texas A&M University, and her J.D. from the University of Colorado School of Law. Her formal work on riparian areas began during her graduate studies on river otters in Louisiana. She has subsequently been employed as a seasonal biologist for the Bureau of Land Management surveying stream and riparian habitats; as an area wildlife biologist in Nevada; and as an environmental coordinator for the Freeport Gold Company, where her environ-

mental compliance responsibilities included monitoring stream and spring water quality. She now teaches courses in public land, land use, water pollution, and natural resources law. Her current research interests are in using science and the law to protect riparian areas and the quality of surface waters, particularly in the West.

Stanley V. Gregory has been a professor of fisheries and wildlife at the Oregon State University since 1986. His research focuses on stream ecosystems, including channel dynamics, woody debris, benthic algae, invertebrates, fish, salamanders, and riparian vegetation. He has studied the influence of human activities on ecosystem structure and function, and he is an expert in the historical reconstruction of rivers and riparian forests. Dr. Gregory received his B.S. in zoology from the University of Tennessee and his M.S. and Ph.D. in fisheries from Oregon State University. He has served on the NRC Committee on Environmental Issues in Pacific Northwest Forest Management.

Judson W. Harvey has been a hydrologist with the U.S. Geological Survey’s National Research Program in Reston, VA since 1995. His research is focused on hydrologic transport and biogeochemical reactions near the interface between groundwater and surface water. Dr. Harvey has investigated water flow and chemical reactions in streams and wetlands throughout the country, including steep forested watersheds of the Rocky Mountains in Colorado, alluvial floodplains of semi-arid basins in Arizona, and peatlands in the Everglades of south Florida. His training in hydrology was at the Department of Environmental Sciences at the University of Virginia, after which he held an NRC Postdoctoral Fellowship at the USGS in Menlo Park, CA. Dr. Harvey currently serves on the editorial board of Water Resources Research and on the Water Quality Committee of the American Geophysical Union.

Manuel C. Molles, Jr. is a professor of biology at the University of New Mexico and curator of ichthyology and arthropods at the Museum of Southwestern Biology. He received his Ph.D. in zoology from the University of Arizona. Dr. Molles’ research focuses on riparian ecology, ecology of desert streams, riverine and riparian biodiversity, and ecology of exotic species, with particular attention given to the Rio Grande. In addition, he is an expert in groundwater–stream interactions and the effect of forest fire and flooding on riparian ecosystems.

Elizabeth I. Rogers is a research ecologist with White Water Associates, Inc., where she is involved in a variety of research, resource management. and education projects involving riparian areas. Dr. Rogers has been a principal scientist on the ecological studies of rivers required by the Federal Energy Regulatory Commission for relicensing of hydroelectric projects. In addition, she has conducted research on bird and mammal use of riparian areas of rivers, lakes, and ephemeral

pools. Much of her research has been focused on creating recommendations for reducing impacts of forestry and agriculture in riparian areas. Dr. Rogers has taught both field and lecture courses on riparian functions and values to resource managers from state and federal agencies and the private sector, as well as real estate agents dealing with lakeshore properties. She received her Ph.D. in zoology (ornithology) from Michigan State University, her M.S. in environmental education from Southern Oregon State University, and her B.S. in biology from Central Michigan University.

Jack A. Stanford is the Bierman Professor of Ecology at the University of Montana and the director of the Flathead Lake Biological Station. He received his B.S. and M.S. from Colorado State University and his Ph.D. from the University of Utah. He is interested in the many natural factors and disturbances that interact to determine the distribution of species and productivity of food webs in aquatic and terrestrial environs, as well human influences that alter natural biogeochemical patterns. Dr. Stanford has extensive experience studying the ecology of mountain rivers (Flathead, Columbia, Missouri, Colorado) and their interaction with the shallow subsurface. In particular, he has studied how flow regulation by dams and diversions alters important ecosystem processes, like interstitial flow, gravel transport, temperature patterns, and channel–floodplain connectivity. Dr. Stanford was a member of the NRC Committee on Watershed Management.

Laura J. Ehlers is a senior staff officer for the Water Science and Technology Board of the National Research Council. Since joining the NRC in 1997, she has served as study director for eight committees, including the Committee to Review the New York City Watershed Management Strategy, the Committee on Riparian Zone Functioning and Strategies for Management, and the Committee on Bioavailability of Contaminants in Soils and Sediment. She received her B.S. from the California Institute of Technology, majoring in biology and engineering and applied science. She earned both an M.S.E. and a Ph.D. in environmental engineering at the Johns Hopkins University.

Next: COLOR PLATES »
Riparian Areas: Functions and Strategies for Management Get This Book
× 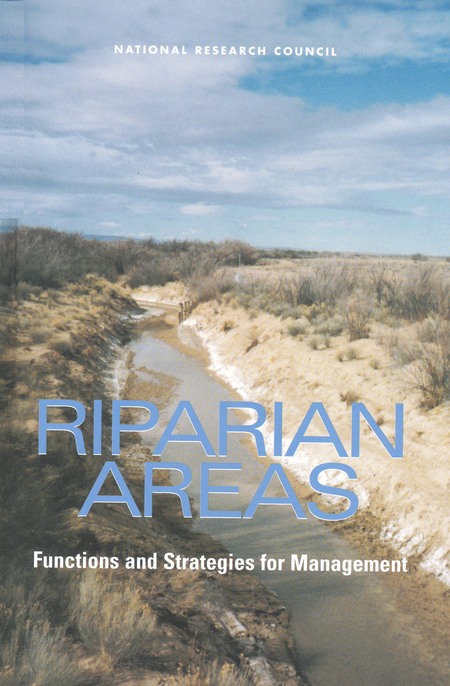 The Clean Water Act (CWA) requires that wetlands be protected from degradation because of their important ecological functions including maintenance of high water quality and provision of fish and wildlife habitat. However, this protection generally does not encompass riparian areas—the lands bordering rivers and lakes—even though they often provide the same functions as wetlands. Growing recognition of the similarities in wetland and riparian area functioning and the differences in their legal protection led the NRC in 1999 to undertake a study of riparian areas, which has culminated in Riparian Areas: Functioning and Strategies for Management. The report is intended to heighten awareness of riparian areas commensurate with their ecological and societal values. The primary conclusion is that, because riparian areas perform a disproportionate number of biological and physical functions on a unit area basis, restoration of riparian functions along America’s waterbodies should be a national goal.