Get This Book
Visit NAP.edu/10766 to get more information about this book, to buy it in print, or to download it as a free PDF.
« Previous: Appendix D Types of Geoscience Data and Collections
Page 99 Share Cite
Suggested Citation:"Appendix E Glossary." National Research Council. 2002. Geoscience Data and Collections: National Resources in Peril. Washington, DC: The National Academies Press. doi: 10.17226/10348.
×

The process by which a specimen is formally entered into a collection. Accession includes listing the specimen in the collection’s permanent inventory.

A body of sediment or rock that is sufficiently saturated to yield ground water to springs or wells.

A low area of the earth’s crust in which sediments have accumulated.

All the areas of the earth occupied by living organisms, including land, sea, and the atmosphere.

A thrust fault that does not reach the surface of the earth.

Storage containers for cores. A widely used size is approximately 3 feet long and holds three to five lengths of core (9 to 15 linear feet). Depending on the density of the rock, such a box can weigh 35 to 50 pounds.

A zone within the bedrock in which oil or gas resides, but which was overlooked in an initial analysis and extraction effort.

The process of recording metadata in some centralized database, usually with some kind of index numbering system, in any medium.

The characteristic weather over a region averaged over a long period.

A group of objects organized for ready access and study. Geoscience collections are groupings of individual geoscience items that may be related by sample type, geographic location, or scientific or applied interests. Museum collections commonly contain specimens of local interest or specimens that reflect the research interests of curators of the museum.

Descriptions of the engineering characteristics of a given well.

Informal term for the process of converting catalog data or metadata into a digital form.

A long cylindrical sample of the earth’s crust (about 2 inches in diameter) taken most commonly by means of a diamond core drill (for rock) or by vibrating very rapidly a long metal tube (unconsolidated sediment cores).

Computed or computerized tomography; an imaging method that uses computers to assemble multiple x-ray images into a three-dimensional picture of the subject being scanned.

The process by which specimens are cleaned, sorted, boxed, identified, labeled, catalogued, and perhaps undergo reconstruction when they are properly brought into a collection.

Cuttings are the chips of rock that come up the outside of the drill stem, after having been cut by a rotary drill bit. They are samples of the rock through which the drill bit has passed.

Individual facts, figures, or other items of information organized for analysis.

The transfer of data from one medium to another to ensure that they remain accessible as technology changes and older technology becomes obsolete.

The procedure by which a specimen is formally and permanently removed from a collection.

The process of dehydration.

The process by which particles break up or apart.

The process by which the existence of data or information is gleaned.

A hole created by the process of drilling into the ground

Federal Geographic Data Committee, established by the Office of Management and Budget to address the coordination and standards objectives in the development of the National Spatial Data Infrastructure (NRC, 1994).

A region or area that possesses or is characterized by a particular oil, gas, or mineral resource.

Any igneous, sedimentary, or metamorphic rock represented as a unit or any sedimentary bed or consecutive series of beds sufficiently homogeneous or distinctive to be a unit.

The remains or traces of living things from the geological past preserved in the sedimentary rock. They include a huge variety of objects from dinosaur bones and footprints to petrified wood to impressions of shells on large rock slabs to the remains of single-cell organisms mounted on microscope slides.

Hydrocarbons that exist as a vapor at ordinary temperatures and pressures.

The study of the Earth through chemical methods.

The use of multi-disciplinary databases that facilitate the extraction of knowledge from the geologic record.

A line along which a geophysical trace, or data position that can be read, occurs.

The study of the Earth through quantitative, physical methods. Sub-disciplines include seismology and tectonophysics, among others.

Tops of an anomalous subsurface pore pressure that is higher than the normal, predicted hydrostatic pressure for a given depth. Abnormally high pore pressure might occur in areas where burial of water-filled sediments by impermeable sediment such as clay was so rapid that fluids could not escape, and the pore pressure increased with deeper burial. Excess pressure, called over-pressure or geopressure, can cause fluids to escape rapidly leading a well to blow out or become uncontrollable during drilling. SOURCE: Schlumberger Oilfield Glossary, 2002.

A short term for the collective subdisciplines of the geological (solid Earth) sciences, including engineering geology, geobiology, geochemistry, geohydrology, geophysics, sedimentology, and stratigraphy, among others.

A term applied to geographic data that are spatial (they show the geographic distribution of a phenomenon).

The application of scientific methods and engineering principles to the acquisition, interpretation, and use of materials from the Earth’s crust.

Any organic compound—gaseous, liquid, or solid—consisting solely of carbon and hydrogen. Often used as generic term for oil and gas.

The point at which the oily hydrocarbon floats on the water of a reservoir. The formation still has irreducible water saturation. The gas-cap in the reservoir is also an example of a contact.

Long thin column of ice collected by drilling from a glacier or ice sheet, usually 2 to 6 inches in diameter.

The process of creating a searchable tool for a collection, work, or document.

The petroleum industry, including its various business segments such as exploration, production, refining, transportation, and marketing.

The collective knowledge and history of an organization held by employees of that organization (institution), especially those who have been there for a number of years.

Lying between particles comprising the matrix of a sample.

An animal without a spinal column or backbone, includes organisms such as insects, shellfish and worms.

A set of specimens collected in one place at one time.

A tape that has a magnetic coating used for recording numeric data.

A low-producing oil or gas well which borders on being economically feasible to operate.

Term used to describe a dataset and bring value to the scientific data represented. Examples include collecting conditions, instrumentation parameters, location, depth, range, and the names of the analysts and techniques they employed.

Pertaining to the scientific study of various inorganic natural substances and their properties.

The process of dehydrogenation especially by the action of oxygen.

Pertaining to the study of life in past geologic time, based on fossil plants and animals.

A measure of fluid flow or deliverability of fluids from a rock; it can only be measured directly from the examination of actual rock samples such as cores. Fluids contained in the pores of a rock cannot flow if it lacks sufficient permeability.

Pertaining to the scientific study and classification of rocks.

Pertaining to the study of the physical and chemical properties of rocks, especially as it relates to their fluid holding properties.

A measure of the fluid storage capacity of a rock; it can be determined by examination of cores or subsurface data.

Various steps necessary to care for geoscience data and collections including: data acquisition, organization and maintenance, making users aware of samples and data, making data accessible, and assuring that data are useful and of sufficient quality.

The process by which a collection is evaluated against specific criteria. For example, a profile indicator or criterion might consist of conservation status, arrangement, or storage container quality.

An avalanche of hot ash, pumice, rock fragments, and volcanic gas that spills down the side of a volcano at a rate of 100 km/hour or more. The temperature within these flows may be greater than 500° C. Once these flows have been deposited, they may flatten and weld together as a result of the intense heat and the weight of the overlying material.

A storage facility that may or may not be climate controlled. For instance, a core repository will contain cores in addition to cuttings, logs, and other samples that either directly or indirectly augment the core collections themselves. Geoscience repositories contain both geoscience data and collections.

A porous and permeable mass of rock that contains and/or transmits fluids.

A summary of a well’s important information (e.g., drilling rates, total depth, production rates) prepared by a scout, an individual employed to gather such information, often from a competitor, by all available means.

Production of oil or gas as a result of artificially augmenting the reservoir energy (drive), as by injection of water or other fluid.

Rock resulting from the consolidation of loose sediment that has accumulated in layers.

A collection of servers that exchange large volumes of data and information across the Internet.

A sub-discipline of geology that deals with the origin, composition, distribution, and succession of strata or the overall arrangement of strata.

A layer of sedimentary rock visually distinguishable from other layers above and below.

A contiguous surface area beneath which one or more petroleum reservoirs either has produced or is expected to produce more than 5 billion barrels of oil or more than 30 trillion cubic feet of combustible gas.

The study of the types and diversity of organisms and their relationships.

A tract or region of the Earth’s surface considered as a physical feature or other distinguishing characteristic.

A fragment of rock mechanically ground to a thickness of about a thousandth of an inch (0.03 mm) and mounted on a glass slide for microscopic examination.

A fault with a dip (incline) of 45 degrees or less on which the overlying side of the fault appears to have moved upward relative to the underlying side.

The location or route followed by a seismic survey.

The single specimen on which the original description of a particular species is based, which serves as a permanent point of nomenclatural reference for the application of the name of that species.

A small unfilled cavity in rock.

The simplest form of storage; does not include curation of samples, or promoting accessibility.

A method of secondary recovery in which water is injected into an oil reservoir to force additional oil out of the reservoir rock and into the well bores of producing wells.

A bore hole sunk into the ground for the purpose of obtaining fluids such as water or oil and gas.

A graphic paper or electronic record of remotely measured observations or tests made on the rocks through which the drill passed plotted as a continuous function of depth.

Next: Appendix F Acronyms and Abbreviations »
Geoscience Data and Collections: National Resources in Peril Get This Book
× 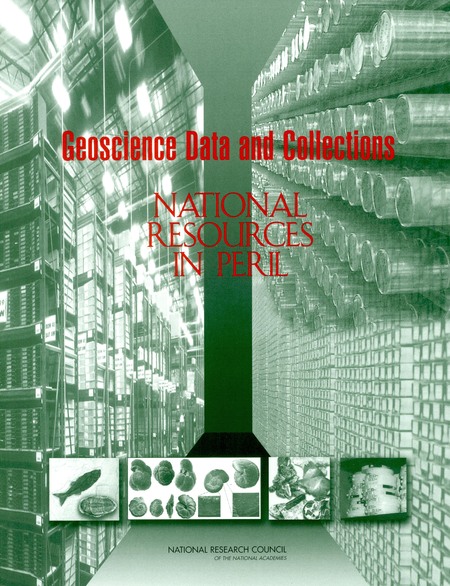 Geoscience data and collections (such as, rock and sediment cores, geophysical data, engineering records, and fossils) are necessary for industries to discover and develop domestic natural resources to fulfill the nation’s energy and mineral requirements and to improve the prediction of immediate and long term hazards, such as land slides, volcanic eruptions and global climate change. While the nation has assembled a wealth of geoscience data and collections, their utility remains incompletely tapped. Many could act as invaluable resources in the future but immediate action is needed if they are to remain available. Housing of and access to geoscience data and collections have become critical issues for industry, federal and state agencies, museums, and universities. Many resources are in imminent danger of being lost through mismanagement, neglect, or disposal. A striking 46 percent of the state geological surveys polled by the committee reported that there is no space available or they have refused to accept new material. In order to address these challenges, Geoscience Data and Collections offers a comprehensive strategy for managing geoscience data and collections in the United States.