Get This Book
Visit NAP.edu/10766 to get more information about this book, to buy it in print, or to download it as a free PDF.
Page i Share Cite
Suggested Citation:"Front Matter." National Research Council. 2002. Safe on Mars: Precursor Measurements Necessary to Support Human Operations on the Martian Surface. Washington, DC: The National Academies Press. doi: 10.17226/10360.
×

Aeronautics and Space Engineering Board Space Studies Board

This study was supported by Contracts No. NASW-96013 and No. NASW-99037 between the National Academy of Sciences and the National Aeronautics and Space Administration. Any opinions, findings, conclusions, or recommendations expressed in this publication are those of the author(s) and do not necessarily reflect the views of the agency that provided support for the project.

Cover: “First Light,” by Pat Rawlings and commissioned by NASA, depicts the first human travelers to Mars exploring the enormous Noctis Labyrinthus canyon system. Just after sunrise, early morning fog masks the canyon floor 4 miles below. These scientists-explorers conduct geological and meteorological research in order to help us better understand the characteristics of our sister planet and possibly our own Earth. Reproduced courtesy of the artist and NASA.

Additional copies available for sale from

The National Research Council was organized by the National Academy of Sciences in 1916 to associate the broad community of science and technology with the Academy's purposes of further-ing knowledge and advising the federal government. Functioning in accordance with general poli-cies determined by the Academy, the Council has become the principal operating agency of both the National Academy of Sciences and the National Academy of Engineering in providing services to the government, the public, and the scientific and engineering communities. The Council is administered jointly by both Academies and the Institute of Medicine. Dr. Bruce M. Alberts and Dr. Wm. A. Wulf are chairman and vice chairman, respectively, of the National Research Council.

University of Texas at Arlington (retired)

Humankind's fascination with Mars predates recorded history. The bright planet with the reddish tint is unique among the other celestial objects. Tycho Brahe's observations of its unpredictable motion were deciphered by Johannes Kepler in the early 17th century as he developed his laws of planetary motion. Galileo trained his telescope on Mars and saw it as a disk in 1610. Later in the 1600s, Christiaan Huygens and Gian Cassini drew the first maps of the Martian surface. In the late 18th century, Sir William Herschel, astronomer to King George III, measured the tilt of the planet's axis and noted the Martian atmosphere and its seasons. As recently as the beginning of the 20th century, the respected American astronomer Percival Lowell was writing popularly about Martians populat-ing a planet hospitable to a life-form, if not to a human life-form.

During the space race of the late 20th century, U.S. and Soviet space programs sent the Mariner, Viking, and Mars probes to study the planet during fly-bys, from orbit, and on the Martian surface. In July 1997, the Mars Pathfinder spacecraft of the National Aeronautics and Space Administration (NASA) landed on Mars and released its tiny rover, Sojourner Truth. Anyone with access to the Internet could monitor its meanders, see the Martian landscape through its eyes, and get updates on the Martian weather.

Debate as to which agent, robot or human, is likely to reap the greatest rewards in the future exploration of Mars is outmoded and has evolved in the last decade into a discussion of how the two may complement each other.1,2 In pursuing answers to this question, NASA has channeled the energies of the robotic and human exploration communities to “optimize the use of humans and robots to increase the pace of discovery at multiple destinations.”3 It sponsored the present study to assist it in validating the requirements identified by these communities, specifically as they relate to the preparation for human exploration of Mars. The statement of task for this study is included as Appendix A.

The Committee on Precursor Measurements Necessary to Support Human Operations on the Surface of Mars was confronted with the dilemma of being charged to “emphasize those technological issues which are directly relevant to managing environmental, chemical, and biological risks to humans operating on Mars” while recognizing that a major objective of such human missions will certainly be to search for (possibly hazardous) life on Mars. The committee took the approach of addressing only the earliest human missions to Mars, when the unknowns are the greatest and the steps taken must be the most cautious.

(NRC). They were chosen for their expertise and ability to provide independent judgments, thereby fulfilling the study charter.

Lawrence Townsend, University of Tennessee, and

Although the reviewers listed above provided many constructive comments and suggestions, they were not asked to endorse the conclusions or recommendations, nor did they see the final draft of the report before its release. The review of this report was overseen by Louis Lanzerotti (NAE) of Bell Laboratories, Lucent Technologies. Appointed by the National Research Council, he was responsible for making certain that an independent examination of the report was carried out in accordance with institutional procedures and that all review comments were carefully considered. Respon-sibility for the final content of this report rests entirely with the authoring committee and the institution.

The committee also wishes to thank those in NASA who were so thorough in informing the committee and NRC staff, who facilitated the entire process. The committee would particularly like to recognize the efforts of the study director, Douglas Bennett, who diligently kept us on course and on time.

Operations on the Surface of Mars

Next: Executive Summary »
Safe on Mars: Precursor Measurements Necessary to Support Human Operations on the Martian Surface Get This Book
× 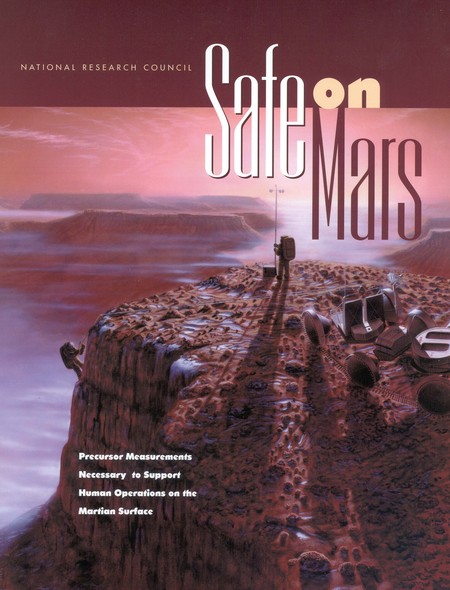 This study, commissioned by the National Aeronautics and Space Administration (NASA), examines the role of robotic exploration missions in assessing the risks to the first human missions to Mars. Only those hazards arising from exposure to environmental, chemical, and biological agents on the planet are assessed. To ensure that it was including all previously identified hazards in its study, the Committee on Precursor Measurements Necessary to Support Human Operations on the Surface of Mars referred to the most recent report from NASA's Mars Exploration Program/ Payload Analysis Group (MEPAG) (Greeley, 2001). The committee concluded that the requirements identified in the present NRC report are indeed the only ones essential for NASA to pursue in order to mitigate potential hazards to the first human missions to Mars.