Care Without Coverage: Too Little, Too Late (2002)

Visit NAP.edu/10766 to get more information about this book, to buy it in print, or to download it as a free PDF.
« Previous: Appendix C Glossary and Acronyms
Page 161 Share Cite
Suggested Citation:"Appendix D Estimates of Excess Mortality among Uninsured Adults." Institute of Medicine. 2002. Care Without Coverage: Too Little, Too Late. Washington, DC: The National Academies Press. doi: 10.17226/10367.
×

D Estimates of Excess Mortality Among Uninsured Adults This appendix illustrates, at the level of the U.S. population overall, the magnitude of differences in the mortality experience of insured and uninsured adults based on the mortality results reported in several of the studies reviewed. The Committee presents these population-level extrapolations of the differing risks of premature death for insured and uninsured adults in order to provide a sense of the actual implications of the differential access and care that adults without health insurance experience at the level of society overall. This exercise is performed for the overall adult population and for adults with one of three conditions whose mortality risks have been studied in conjunction with health insurance: hypertension, breast cancer, and HIV infection. The ranges of estimates within each category and their widely varying popu- lation-level magnitudes serve to demonstrate how the impact of health insurance status on overall mortality depends on â¢ the prevalence and mortality risks of the condition, â¢ the age and demographic distributions of those afflicted by the condition, and â¢ the effectiveness of appropriate health care services in reducing mortality from it. OVERALL MORTALITY RISK Two longitudinal studies reviewed in Chapter 3, one of 13â17 yearsâ duration and the other of 5 yearsâ follow-up, support the use of an estimate of a higher overall mortality risk for uninsured adults of 25 percent (Franks et al., 1993a; 161

162 CARE WITHOUT COVERAGE: TOO LITTLE, TOO LATE Sorlie et al., 1994). Table D.1 presents the population parameters on which the estimate of overall excess mortality among uninsured adults are based. The total number of deaths estimated within each age group for 2000 (based on the mortal- ity rates for 1999) is a function of the different mortality rates for the insured and the uninsured populations. By applying the mortality hazard ratio of 1.25 to the uninsured population estimate for each age group, the number of excess deaths among the uninsured population can be calculated. For example, for those ages 25â34, the overall deaths (40,548) = (0.79)(x) + (0.21)(1.25)(x), where 0.79 and 0.21 represent the proportions of the population with and without health insur- ance, respectively1; 1.25 is the mortality hazard ratio of uninsured to insured; and x is the number of deaths expected across the population if everyone had the mortality rate of the insured population. By solving for x, in this case x = 38,617, and subtracting that from the actual (estimated) number of deaths (40,548), the excess deaths among uninsured 25â34 year olds is 1,930. Repeating this calculation for each age group, excess deaths among uninsured adults ages 25â64, based on a 25 percent higher mortality risk, can be estimated to be in the range of 18,000 each year. This calculation makes a number of simplify- ing assumptions, including that the incremental mortality risk of being uninsured is constant over the 25-64 age range, but it gives an order of magnitude to the potential impact of uninsurance on mortality. For comparison, diabetes accounts for between 15,000 and 16,000 deaths each year and cerebrovascular disease (e.g., stroke) between 18,000 and 19,000 among 25â64 year olds (CDC, 2000b). Hypertension More than 23 million U.S. residents between 25 and 65 are estimated to have either diagnosed or undiagnosed hypertension, based on the National Health and Nutrition Examination Survey III (Hyman and Pavlik, 2001). The rate of unin- surance for the general population in this age group is 16 percent (Table D.1). If adults between ages 25 and 65 who have hypertension are as likely to lack health insurance as the overall population in this age range, then about 3.68 million adults with hypertension can be expected to be uninsured. The RAND Health Insurance Experiment documented a 10 percent lower overall mortality risk for adults with hypertension in insurance plans with no cost sharing compared to those in plans with any cost sharing, due to better hyperten- sion treatment (Newhouse et al., 1993). This 10 percent value is used here as an estimate of the differential overall mortality between uninsured and insured adults ages 25â64 with hypertension.2 If these 3.68 million uninsured adults with hyper- 1Actual calculation carried out with more significant digits. 2The assumption that the difference in hypertension detection, treatment, and control between the free-care and any-cost-sharing groups in the RAND study is comparable to the difference for adults

164 CARE WITHOUT COVERAGE: TOO LITTLE, TOO LATE tension were to experience a 10 percent reduction in their mortality risk as a result of gaining health insurance, calculating from the general population mortality rate for adults ages 25â64 (3,717 per million, as presented in Table D.1), the excess deaths among uninsured adults due to unidentified and undertreated hypertension are about 1,300 or 1,400 each year (10 percent of 3,717 = 372 excess deaths/ million population, multiplied by 3.68 million = 1,369). Breast Cancer Approximately 40,200 women died of breast cancer in 2001, an estimated 16,560 of them under age 65 (41.2 percent of breast cancer deaths in 1997 occurred in women under age 65) (NCIâSEER, 2001). Using an uninsured rate of 7.55 percent for women diagnosed with breast cancer (the uninsured rate estimated for adults under 65 with all forms of cancer, based on unpublished Medical Expenditure Panel Survey [MEPS] data for 1997),3 the excess mortality for uninsured women with breast cancer can be calculated. Using the study findings reported in Chapter 3 of a 30 to 50 percent greater risk of dying among uninsured women (Ayanian et al., 1993; Lee-Feldstein et al., 2000; Roetzheim et al., 2000a), the number of excess deaths among uninsured women that are attrib- utable to their higher risk is in the range of 360 to 600 each year. This estimate is conservative because it does not take into account those women who were unin- sured at the time the disease developed but who gained coverage (most probably Medicaid) at some point thereafter. If the uninsured rate for all women in the 50â 64 year-old age range, 13â14 percent were used in the estimate, the number of excess deaths due to uninsurance would almost double. HIV Infection Approximately 20 percent of HIV-infected adults are uninsured, based on HIV Cost and Services Utilization Study interviews in 1996â1997 (Goldman et al., 2001). The 12-month mortality rate for HIV-infected adults over this same time period was 5 percent. In 1998, 12,750 deaths attributable to HIV occurred in adults ages 25â64 (CDC, 2000b). HIV-infected adults who have health insur- ance have been estimated to have a 71â85 percent lower risk of dying within six months than do those who are uninsured (Goldman et al., 2001). By assuming that with and without health insurance is speculative but reasonable. (The estimated service utilization difference between insured adults who face no cost sharing and those who face cost sharing is likely to be smaller than that between uninsured adults and adults with any form of health insurance. The results of the quasi-experimental Medi-Cal study reported in Chapter 3 also support this assumption (Lurie et al., 1984; 1986). 3MEPS data provided to the Institute of Medicine (IOM) by the Center for Cost and Financing Studies, Agency for Healthcare Research and Quality, December 2001.

Next: Appendix E Biographical Sketches »
Care Without Coverage: Too Little, Too Late Get This Book
× 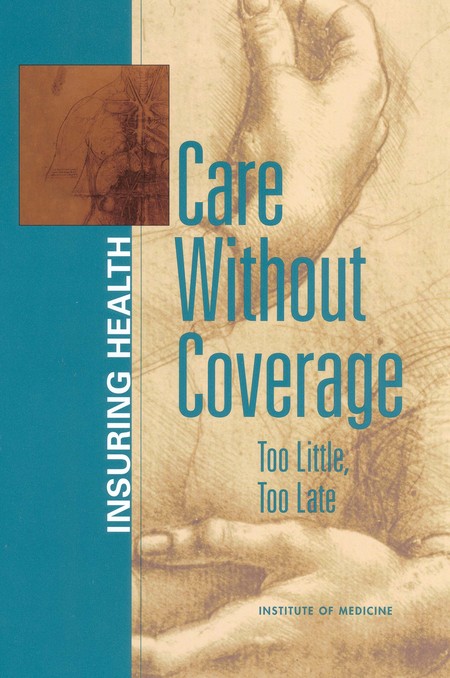 Many Americans believe that people who lack health insurance somehow get the care they really need. Care Without Coverage examines the real consequences for adults who lack health insurance. The study presents findings in the areas of prevention and screening, cancer, chronic illness, hospital--based care, and general health status. The committee looked at the consequences of being uninsured for people suffering from cancer, diabetes, HIV infection and AIDS, heart and kidney disease, mental illness, traumatic injuries, and heart attacks. It focused on the roughly 30 million -- one in seven--working--age Americans without health insurance. This group does not include the population over 65 that is covered by Medicare or the nearly 10 million children who are uninsured in this country. The main findings of the report are that working-age Americans without health insurance are more likely to receive too little medical care and receive it too late; be sicker and die sooner; and receive poorer care when they are in the hospital, even for acute situations like a motor vehicle crash.