Get This Book
Visit NAP.edu/10766 to get more information about this book, to buy it in print, or to download it as a free PDF.
« Previous: Genetically Modified Organisms: An Ancient Practice on the Cusp
Page 45 Share Cite
Suggested Citation:"Benefits of Biotechnology." National Academy of Engineering. 2002. Engineering and Environmental Challenges: Technical Symposium on Earth Systems Engineering. Washington, DC: The National Academies Press. doi: 10.17226/10386.
×

Never think for a minute that we are going to build permanent peace in this world on empty stomachs and human misery.

On October 6, 1999, Norman Borlaug, the 85-year-old Nobel laureate, visionary, and father of the Green Revolution, stood in the bright sunlight of a Texas fall day as a new Crop Biotechnology Building at Texas A&M University was named in his honor. In his address to the crowd assembled for the occasion, Dr. Borlaug did not reflect on his life accomplishments. Instead he issued an impassioned challenge for the future. Arguing eloquently that peace will not be achieved until we feed the world, he called on agricultural scientists to pursue advances in biotechnology vigorously to enable humanity to realize this fundamental goal in the twenty-first century (Borlaug, 1999).

As an administrator at a land-grant university, I can tell you that Norman Borlaug’s call to advance agricultural science in the service of humanity resonates strongly with our teaching, research, and extension faculty. Yet, on a day-to-day basis, we go into our laboratories and test fields with short-term goals and benefits in mind in the belief that incremental advances will lead us toward solutions to the world’s most daunting problems. In this paper, I will outline some of the current and anticipated benefits to humanity from agricultural biotechnology, offer a few examples of exceptionally promising technologies, and note the key challenges we face.

For centuries, farmers have relied on the newest technologies of their era, such as hybridization and selective animal breeding, to produce foods with specific beneficial traits. Biotechnology simply raises that capability to a new level of precision. Like earlier technologies, biotechnology promises to provide many advantages, especially in three broad categories: environmental protection, higher yields, and improvements in human health.

Plants engineered for certain characteristics will have major benefits for the global environment. The primary impact will result from a reduction in the overall use of chemicals to protect against plant viruses, which often claim up to 80 percent of many crops. Like vaccines for humans, biotechnology enables breeders to insert small fragments of plant viruses into crops so they develop natural protection or immunity against the disease and pass this trait on to future generations.

Losses of crops to insect pests can be equally devastating. Biotechnology can confer resistance to those pests in specific crops and locations. For example, crops containing insect-resistant genes from Bacillus thuringiensis have made it possible to reduce significantly the amount of pesticide U.S. farmers apply to cotton crops. In the case of cotton alone, the National Research Council reported a reduction of 5 million acre-treatments, or about 1 million kilograms of insecticides, in 1999 compared with 1998 (NRC, 2000). Even though chemicals and their precision application have been greatly improved in the last two decades, residues continue to enter the soil and are washed into watersheds. Biotechnology may offer our best hope for significantly reducing this chemical stress to the environment.

From my perspective as an agricultural engineer whose career has focused on water and soil, the potential impact of biotechnology on the preservation of land resources would be significant. When crops are genetically engineered to resist herbicides, pests, or diseases, farmers can reduce activities that disturb the land. For example, techniques such as weeding require moving the soil, which results in erosion. Engineered crops will make it more likely that producers in both developed and developing countries will retain valuable topsoil rather than sending it by the ton down rivers to the sea.

A second tremendous benefit will be higher yields, which might seem like a disadvantage at a time when U.S. producers are being paid historically low prices for their crops. However, this situation has as much to do with government agricultural and trade policies as with crop yields. Consider the global situation. One of the major technologies that led to the Green Revolution in the 1950s and 1960s was the development of high-yield semidwarf varieties of wheat. Back then, it took plant breeders 10 to 12 years of mixing thousands of genes to produce these varieties. Today, breeders can select a specific genetic trait from any plant and move it into the genetic code of another plant, thereby developing new varieties much more quickly. Speed is not just a convenience for the scientific community; it is critical for us all. World population may reach 9 billion by 2050, and all of those people must be fed. Unless crops produced on land now devoted to agriculture can be made more productive, the disappearance of rain forests, wetlands, and other habitats—and the human misery that come with them—will surely accelerate.

Most crops grown in this country produce less than 50 percent of their genetic potential, and crops raised in the developing world yield far less. The

shortfalls are due in large part to the inability of crops to tolerate or adapt to environmental stresses, pests, and disease. For example, in 1993 the disease Fusarium caused an estimated $1 billion in damage to wheat and barley crops. Cold, wet weather and frost damage have caused severe damage to the potato crop in the northern plains states. Field crops and the beef industry in the South have suffered from several years of drought. In the developing world, diseases and poor environmental conditions often lead to total crop failure. In response to changes in global climate and the rising demand for food supplies to feed the world, marginal farmland can and must be made productive. Engineering crops to thrive in less-than-optimum soils, with less water, or under other environmental stresses will make that possible.

The third area of potential benefit is improvements to human health. As the connection between diet and health becomes clearer, opportunities will increase to engineer foods that can deliver specific disease-preventing compounds or treat chronic diseases. Extraordinary accomplishments have already been made, such as tomatoes with a higher antioxidant (lycopene) content; transgenic rice with greater production of beta carotene, a precursor to vitamin A; transgenic rice with elevated levels of iron; and fruits and vegetables with higher levels of vitamins C and E. In developing countries, vitamin deficiencies are major causes of blindness and underweight in children, mortality during childbirth, and anemia. Today, these nations must rely on expensive supplementation programs to address nutritional problems. The sustainable solution may well be genetic improvements to food crops.

Another major health benefit is the development of pharmaceuticals and vaccines from transgenic plants. Vaccines for diseases are often expensive to produce, require special storage, and require trained personnel to administer—all major impediments in the Third World. Biologists have produced vaccines in plants, such as potatoes and bananas, against infectious diseases of the gastrointestinal tract. Although these vaccines are in the very early stages of development, they could eventually have a tremendous impact on people in the world’s poorest nations. In addition, about one-third of medicines used today are derived from plants. Once genetic modifications are identified, they could increase the yields of these medicinal substances. The frontier of improvements in health may well be in farmers’ fields.

A perennial problem for agriculturalists worldwide is accurately diagnosing diseases in plants and animals. Some diseases can be detected visually, but samples must often be sent to a laboratory, and the results may take days or weeks. Delays can be costly when a quick diagnosis could prevent further damage. Two agricultural biotechnologies that will be under development in the years to come are especially important and intriguing—techniques for diagnosing diseases and biochips that can protect against contamination.

Advances in biotechnology are yielding new products and techniques for diagnosing disease. For example, one diagnostic kit under development uses

antibodies to detect plant pathogens. This enzyme-linked assay is based on the ability of an antibody to recognize and bind to a specific antigen associated with a plant pathogen. Diagnostic kits have been developed to detect a number of diseases, including bacterial canker of tomato and soybean root rot. These kits do not require laboratory equipment and can be used by producers in the field.

In a related development, scientists at Purdue University and other research laboratories are creating biochips, which mate silicon computer chips and biological assays, to search for proteins, biochemicals, and pathogens in organisms. Researchers could use biochips to discover beneficial compounds in millions of organisms on Earth for use in medicines or to warn of microbial contamination in food supplies.

Other benefits from biotechnology include reduced costs, the jobs and wealth created by a vibrant new industry, and more desirable, fresher, shelf-stable food products for consumers. Biotechnology may not deliver every benefit that we can imagine, but a great number of these and other advantages will very likely materialize. However, these benefits will not occur—or at least not rapidly—unless we address major challenges, including ensuring adequate support for research. Biotechnology for the 21st Century, a report from the National Science and Technology Council, highlighted five broad research areas for agricultural biotechnology that merit attention by federal agencies (NSTC, 1995):

The second challenge facing us is, of course, consumer education. In contrast to the attitudes of European consumers, recent surveys have revealed consistently positive attitudes by U.S. consumers toward biotechnology, if that means producing high-quality foods with health benefits. This confidence reflects the public’s trust in the U.S. government’s food protection system. That faith might be eroded,

however, in light of incidents such as the recent discovery that Taco Bell taco shells contained grain from genetically modified corn that the Food and Drug Administration had not approved for human consumption. Organized interest groups typically use such incidents as fodder for their continued efforts to ban genetically modified foods. Even in some rural areas of Texas, individuals participating in a national campaign run largely through the Internet have brought petitions to county courts asking that the commissioners support a declaration against genetically modified foods. The regulation and labeling of genetically modified foods will clearly be the subject of continued public debate. Given this environment, the agricultural industry, educational institutions, and the scientific community must work diligently to inform citizens about the safe and appropriate uses of biotechnology.

In a land of plenty and in prosperous times, U.S. citizens and their counterparts in Europe have had difficulty understanding why we must pursue advances in biotechnology. I doubt that the billions of people in developing nations have the same concern. It is incumbent upon agricultural scientists and engineers to provide the benefits we know can be realized through biotechnology and to persuade our governments and citizens to support this endeavor. For what is at stake may very well be the future of humanity.

Borlaug, N. 1999. Speech given at Texas A&M University during the dedication of the Norman E. Borlaug Center for Southern Crop Improvement. October 6, 1999. 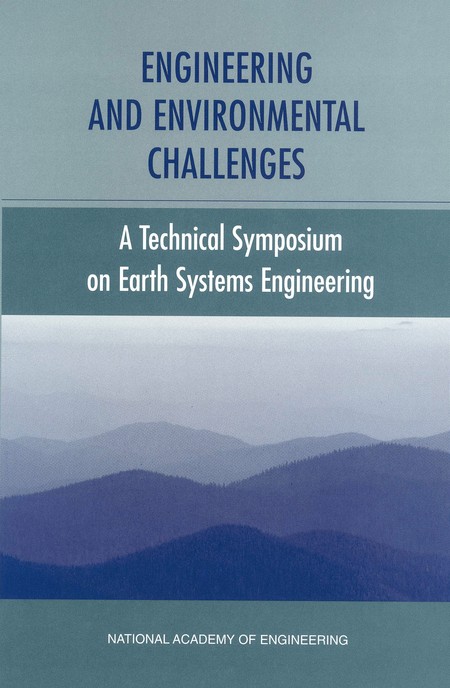 Dealing with the challenges presented by climate change or rapid urban development require cooperation and expertise from engineering, social and natural sciences. Earth systems engineering is an emerging area of multidisclinary study that takes a holistic view of natural and human system interactions to better understand complex systems. It seeks to develop methods and tools that enable technically sound and ethically wise decisions. Engineering and Environmental Challenges presents the proceedings of a National Academy of Engineering public symposium on Earth systems engineering.