Chapter:C Natural Seepage of Crude Oil into the Marine Environment

Get This Book
Visit NAP.edu/10766 to get more information about this book, to buy it in print, or to download it as a free PDF.
« Previous: B Definitions and Conversions
Page 191 Share Cite
Suggested Citation:"C Natural Seepage of Crude Oil into the Marine Environment." Transportation Research Board and National Research Council. 2003. Oil in the Sea III: Inputs, Fates, and Effects. Washington, DC: The National Academies Press. doi: 10.17226/10388.
×

C
Natural Seepage of Crude Oil into the Marine Environment

Crude oil spills in the marine environment, if sufficiently large, often lead to serious environmental pollution, but environmental pollution can also be caused by natural seepage of crude oil. This latter case results in environmental contamination. Estimating the amount of natural seepage of crude oil into the marine environment involves broad extrapolations from minimal data. The National Research Council (1975, 1985) has made these kinds of estimates previously, and what follows in an update of this information. Because of the nature of these estimates, they are normally reported to one significant figure (best estimate and range of estimates), except when quoted from cited references. The units used are metric tons (tonnes).

RECENT ESTIMATES OF SEEPS IN THE NORTHERN GULF OF MEXICO

Recent studies have suggested that seepage rates in the Gulf of Mexico are much higher than reported in previous NRC studies (1975, 1985). MacDonald et al., (1996) using submarines and remote sensing have identified at least 63 individual seeps (Fig. 2-11). For example, using satellite remote sensing to map oil slicks, MacDonald et al. (1993) estimated the total seepage in a region of about 23,000 km2 in the Gulf to be about 17,000 tonnes per year. Later, however, MacDonald (1998) conservatively estimated a much lower rate of about 4,000 tonnes per year as a minimum. The difference in these estimates results from the various underlying assumptions that have been used and emphasizes the difficulty in establishing seepage rates. These estimates have now been revised based on SAR and other remote sensing data, compiled by commercial enterprises (Earth Satellite Corporation and Unocal Corporation). With the Earth Satellite data set, Mitchell et al. (1999) estimated oil seepage rates ranging from about 40,000 to 100,000 tonnes per year, with an average rate of 70,000 tonnes per year. This value accounts only for the northern Gulf of Mexico and excludes the Campeche Basin offshore from Mexico, one of the more prolific petroleum basins in the world. Assuming the seep scales are proportional to the surface area, a reasonable seep rate for the entire Gulf is about double the northern Gulf estimate, giving a total Gulf of Mexico seep rate of about 140,000 tonnes per year (ranging from 80,000 to 200,000 tonnes per year).

However, because of the assumptions made during interpretation of the satellite information, a number of uncertainties exist, including:

Natural oil seeps have been noted offshore of southern California in the past (Weaver, 1969; Yerkes et al., 1969), and their distribution is extensive. Early rates were measured using primitive techniques and extensive extrapolations. For example, at Coal Oil Point, early estimates ranged from 520

Recently, more accurate measurements have become available in the Coal Oil Point region from Clester et al., (1996) and Hornafius et al., (1999). They combined information from ‘seep tents’ (funnel-like structures placed over natural seeps), seep-flux buoys that drifted across the seep region, and 50 kHz sonar date. They concluded that Coal Oil Point seeps about 7,800 to 8,900 tonnes of oil per year. To account for seeps likely to be present elsewhere in the Santa Barbara Channel and the offshore Santa Maria and Santa Monica Basins, the total oil seepage offshore southern California is now estimated to be about twice the seepage at Coal Oil Point, or about 17,000 tonnes annually, rounded to one significant figure of 20,000 tonnes of oil per year. This estimate is large but is still less than the upper estimate of Fischer (1978) of 35,000 tonnes per year.

There are four regions offshore North America with known seeps. Two of these, the Gulf of Mexico and southern California, have a combined annual oil seep rate of 160,000 tonnes, derived by adding 140,000 tonnes, estimated from the Gulf of Mexico, and the estimate of 20,000 tonnes from Southern California. Seeps are also known to be present along the northern and southern coastlines of Alaska (Fig. 2-13) and at the coastline of Baffin Island, Canada.

Becker and Manen (1988) identified 29 seeps within the coastal regions of Alaska (Fig. 2-13). Of the 29 areas, 14 are confirmed as actual oil seeps and 15 are unconfirmed reports from the shoreline of the Gulf of Alaska. None of the seeps are beneath the water surface. Rather they lie above the low-tide line or at inland sites and could influence the marine environment through oil transport in freshwater streams.

Using the mean values gives a total of about 360 tonnes annually. Recently, Page et al. (1997) suggested that the total seepage rate from onshore and offshore seep sources into the eastern Gulf of Alaska is much greater than 400 to 1,200 tonnes per year; howevr, they did not specify an upper limit, and included both free petroleum and extractable organic material of sediments in their estimates. Although submarine oil seeps offshore from Alaska have been suspected, there are no documented reports in the public record (Becker and Manen, 1988). Because the seeps of Alaska have not been fully documented, and in order to account for probable undiscovered seeps, the seepage rate for Alaska is conservatively estimated to be 400 tonnes annually.

In Canada, oil seeps have been found at Scott Inlet (Levy, 1978) and Buchan Gulf (Levy and Ehrhardt, 1981) on Baffin Island. Although the evidence shows that oil is seeping from the seabed, no rates of oil seepage have been measured or estimated.

Tables 2-5 through 2-9 summarize the estimates of the yearly amounts of oil seepage occurring offshore from North America. The total seepage is 160,000 tonnes per year. The new estimate seems reasonable given the relative percentage of potential oil-producing areas in North America compared with the rest of the world. In addition, recent remotely-sensed data suggest that North America is by no means an exceptional region for seeps.

GLOBAL ESTIMATES OF OIL SEEPAGE INTO THE MARINE ENVIRONMENT

Considering that totally different approaches were taken to estimating global oil seepage rates, it is remarkable that the ‘best estimates’ obtained by Wilson et al. (1973, 1974) of 600,000 tonnes per year (National Research Council, 1975) and by Kvenvolden and Harbaugh (1983) of 200,000 tonnes per year (National Research Council, 1985) fall within a factor of three of each other. Whereas Wilson et al. (1973a,b) established plausible, but not likely accurate rates for current conditions, Kvenvolden and Harbaugh (1983) determined possible average rates throughout geologic time and established constraints on these rates based on the availability of oil for seepage. In a sense, the two approaches complement each other, one establishing reasonable rates and the other reasonable limits.

Nevertheless, recent and improved data from the northern Gulf of Mexico and from offshore southern California indicate that oil seepage rates were likely underestimated in 1985 (National Research Council, 1985). Based on the above information and using the methods of Kvenvolden and Harbaugh (1983), the annual global oil seepage rate is now estimated to be between 200,000 and 2,000,000 tonnes (60 and 600 million gallons). The ‘best estimate’ of 600,000 tonnes (180 million gallons), within this range, comes from the acceptance of the original estimates of Wilson et al. (1973, 1974), resulting from a new appreciation for the magnitude of the natural seepage of crude oil, particularly in the Gulf of Mexico.

Next: D Oil and Gas Extraction »
Oil in the Sea III: Inputs, Fates, and Effects Get This Book
× 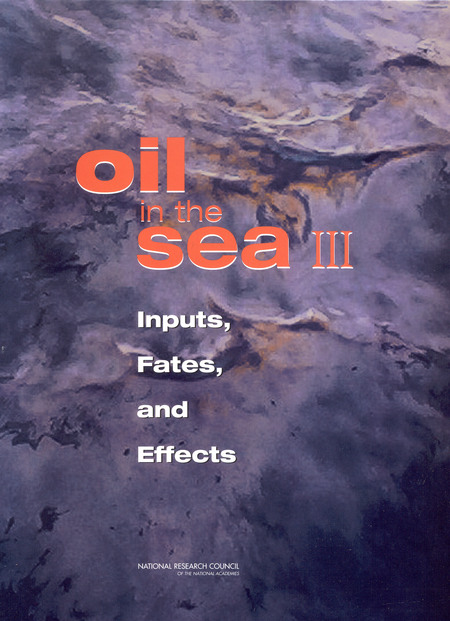 Since the early 1970s, experts have recognized that petroleum pollutants were being discharged in marine waters worldwide, from oil spills, vessel operations, and land-based sources. Public attention to oil spills has forced improvements. Still, a considerable amount of oil is discharged yearly into sensitive coastal environments.

Oil in the Sea provides the best available estimate of oil pollutant discharge into marine waters, including an evaluation of the methods for assessing petroleum load and a discussion about the concerns these loads represent. Featuring close-up looks at the Exxon Valdez spill and other notable events, the book identifies important research questions and makes recommendations for better analysis of—and more effective measures against—pollutant discharge.

Providing a needed update on a problem of international importance, this book will be of interest to energy policy makers, industry officials and managers, engineers and researchers, and advocates for the marine environment.