Get This Book
Visit NAP.edu/10766 to get more information about this book, to buy it in print, or to download it as a free PDF.
« Previous: 5. Recommendations
Page 51 Share Cite
Suggested Citation:"Appendix A: Meeting Agendas." National Research Council. 2002. Small Wonders, Endless Frontiers: A Review of the National Nanotechnology Initiative. Washington, DC: The National Academies Press. doi: 10.17226/10395.
×

Next: Appendix B: Acronyms »
Small Wonders, Endless Frontiers: A Review of the National Nanotechnology Initiative Get This Book
× 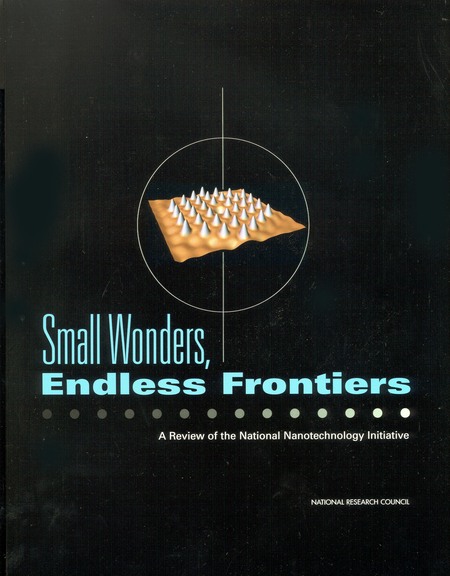 Nanoscale science and technology, often referred to as "nanoscience" or "nanotechnology," are science and engineering enabled by our relatively new ability to manipulate and characterize matter at the level of single atoms and small groups of atoms. This capability is the result of many developments in the last two decades of the 20th century, including inventions of scientific instruments like the scanning tunneling microscope. Using such tools, scientists and engineers have begun controlling the structure and properties of materials and systems at the scale of 10?9 meters, or 1/100,000 the width of a human hair. Scientists and engineers anticipate that nanoscale work will enable the development of materials and systems with dramatic new properties relevant to virtually every sector of the economy, such as medicine, telecommunications, and computers, and to areas of national interest such as homeland security. Indeed, early products based on nanoscale technology have already found their way into the marketplace and into defense applications.

In 1996, as the tremendous scientific and economic potential of nanoscale science and technology was beginning to be recognized, a federal interagency working group formed to consider creation of a national nanotechnology initiative (NNI). As a result of this effort, around $1 billion has been directed toward NNI research since the start of FY 2001. At the request of officials in the White House National Economic Council and agencies that are participating in NNI, the National Research Council (NRC) agreed to review the NNI. The Committee for the Review of the National Nanotechnology Initiative was formed by the NRC and asked to consider topics such as the current research portfolio of the NNI, the suitability of federal investments, and interagency coordination efforts in this area.