Get This Book
Visit NAP.edu/10766 to get more information about this book, to buy it in print, or to download it as a free PDF.
« Previous: Wallace L. Chadwick
Page 54 Share Cite
Suggested Citation:"Julian D. Cole." National Academy of Engineering. 2002. Memorial Tributes: Volume 10. Washington, DC: The National Academies Press. doi: 10.17226/10403.
× 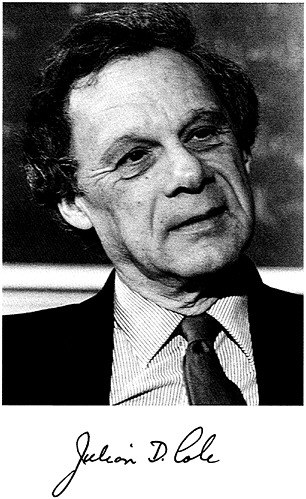 THE ENGINEERING COMMUNITY, and particularly aeronautics, suffered a great loss with the death of Julian David Cole on April 17, 1999, at the age of seventy-four. He was well known throughout the world and highly admired for his mathematical analyses of high-speed flows in aerodynamics, for his pioneering work in the development of modern perturbation methods and their application to complex nonlinear problems in engineering, for his books on these subjects, as an industrial consultant, and as an influential teacher. He was elected to the National Academy of Engineering in 1976 and to the National Academy of Sciences in the same year.

Julian was born in Brooklyn, New York, on April 2, 1925. He received his B. S. degree in engineering from Cornell University and his Ph. D. degree from the California Institute of Technology, where he worked with Hans Liepmann. During his career he was a faculty member at Caltech, scientific liaison officer in London for the Office of Naval Research, a faculty scholar at Boeing, a faculty member and department chair at the University of California at Los Angeles, and a chaired professor at Rensselaer Polytechnic Institute. He was a fellow of the American Physical Society, the American Institute of Aeronautics and Astronautics, and the American Academy of Arts and Sciences. Among other awards he received the Theodore von Kármán Prize

(Society for Industrial and Applied Mathematics), the Award for Meritorious Civilian Service (U. S. Air Force), the Fluid Dynamics Award (American Institute of Aeronautics and Astronautics), and the National Academy of Sciences Award in Applied Mathematics and Numerical Analysis.

Julian began his career at the Guggenheim Aeronautical Laboratories in the mid-1940s, just at the time when an assault on the sound barrier had become a subject of high national priority and when there existed a great and recognized need for the development of nonlinear aerodynamics, especially in the transonic regime. Unfortunately, transonic flows were poorly understood from a fundamental point of view, impossible to calculate, and difficult to study experimentally. Quite remarkably, in his first technical paper in 1948 (with Hans Liepmann), Cole actually foresaw the possibility of shock-free transonic airfoils, in whose development he was later to play a major role. The practical development of transonic wings for advanced transport aircraft, based on this idea, eventually depended on the availability of a suitable calculating method. Great mathematical difficulties stood in the way of this development. The difficulties arose from the nonlinear nature of the flow in this regime, with the matching of the flow about the lifting wing with the far field, and with the development of a stable method of calculation that automatically incorporates shock waves. The first and essential breakthrough in this development was accomplished by Cole while working with Earll Murman at Boeing from 1968 to 1969. Their work on transonic foil theory, published in 1971, showed the way and provided the inspiration for most future transonic calculations of aircraft components and led to important improvements in aircraft efficiency.

His influence in aerodynamics extends far beyond the preceding specific work. From his beginning in 1948, he went on to illuminate the entire field of transonics through a long sequence of research papers and the influential book Transonic Aerodynam cs, 1986, (with Pam Cook). His work was always driven by applications and characterized by a fierce determination to find correct solutions without compromise and despite mathematical difficulties. He influenced and dominated the subject of tran

sonic aerodynamic theory for fifty years. He had a similar influence in the field of hypersonic aerodynamics, beginning in the mid-1940s. This field grew with a focus on warhead problems and then returned to the fore with national interest in the Aerospace Plane. Here his early theory of optimum wings based on a “waverider” concept is very important.

The need to cope with nonlinear phenomena, while urgent and highly visible in aeronautics, existed then throughout engineering and science. A general recognition of this need and response to it began slowly in the 1940s but accelerated continuously and continues with great vigor to this day. The effect on engineering practice has been profound, and especially after the advent of the computer. In this fifty-year development, Julian Cole played a leading and decisive role. It began again early in his career with the development, together with others in a small group at Caltech around the aerodynamicist-mathematician Paco Lagerstrom, of new and innovative general methods of analysis of nonlinear problems. Cole continued persistently in this direction for fifty years, both in the form of general developments, and in special applications of many kinds. His methods have been propogated through many papers and several books: Perturbation Methods in Applied Mathematics, first edition 1968, second edition (with J. Kevorkian) 1980; Similarity Methods for Differential Equations, 1974 (with G. Bluman); and Multiple Scale and Singular Perturbation Methods, 1996 (with J. Kevorkian). The methods developed in these books have found application to nonlinear problems throughout engineering and have provided inspiration and a springboard for a whole generation of engineers faced with the analysis of nonlinear problems in all fields.

Throughout his career, and with considerable acclaim from the mathematical community, Cole persisted in his interest to find a solution to difficult engineering problems, not only in aeronautics, but also in fields as disparate as the mechanics of the cochlea in the ear, and in the effect of radiation in the generation of holes and electrons in semiconductors. Throughout his career he sought to present results of interest directly to his peers at engineering conferences. And of course he persisted,

with devotion to the education of engineers, in bringing to that task and to the university around him a special integrity and wisdom.

He served as an example for all of us engaged in engineering research and education, and not least of all for his wholehearted attention to real engineering problems and to the needs of industry and for bringing his solutions and the means for finding solutions to real practitioners. He will be much missed.

A scientific biography of Julian Cole and a list of his papers and of his many Ph. D. students may be found in the book Math ematics Is for Solving Problems (Society for Industrial and Applied Mathematics, 1996) which was published on the occasion of his seventieth birthday.