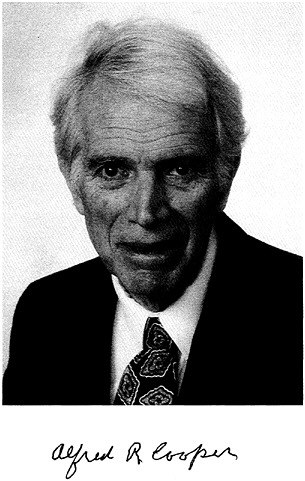 Al was born on January 1, 1924, in New York City and grew up in the nearby community of White Plains. His mother, of German descent, served as a homemaker, and his father, of Irish ancestry, was a self-employed glove salesman who traveled throughout the New York and New England area. A grandmother and other relatives lived in the neighborhood, and from all accounts Al and his sister, Betty, enjoyed a happy childhood. Al was interested in sports, and beyond the usual schoolyard sports he learned to play tennis and golf, and when he was old enough, he would occasionally accompany his father on his sales trips, where he had the opportunity to play on many New England golf courses.

He was a good student with a great curiosity about everything and everybody around him, a trait that remained with him all his life. Al had a well-rounded high school career, playing in the band and also playing basketball, but he demonstrated a particular gift for mathematics and science, making perfect scores on the New York State Regent’s exams. After he graduated from White Plains High School, he entered Alfred University in 1941 as an engineering student, majoring in glass technology. As World War II progressed, he became increasingly caught up in the conflict, and in 1943 joined the U. S. Navy, obtaining a commission

and serving as an officer on a destroyer in the Pacific. Al was discharged in 1946 and returned to Alfred University, where he resumed his studies.

Not all of his time was devoted to class work, however, and Al, who was tall and quick, became a major player on the university’s basketball team. One account of the time described Al as “a bright light in an otherwise dismal season. ” He also read widely and developed a lifelong love of poetry.

Upon obtaining his B. S. degree in glass technology in 1948, Al took a position as a group leader in the RCA Cathode Ray Tube Production plant in Lancaster, Pennsylvania. In the four years that he worked at RCA, he learned a great deal about the behavior and problems of glass tank melting furnaces, and this knowledge helped to qualify him for his next position, in 1952, as manager of laboratories for the Hartford Empire Division of the Emhart Corporation. In his new job Al traveled widely throughout the country, working as a troubleshooter solving glass composition and melting problems for a variety of glass companies. He became well known in the glass industry, was an articulate participant in technical meetings, and served on various industry testing committees.

Nevertheless, in 1956, he decided to seek an advanced degree to learn, as he put it to a friend, more about the physics and chemistry that lay behind the phenomena that he observed in his glass plant problem solving. He had four children at the time, so this was a major change in his family’s circumstances. In 1960 he received a doctor of science degree at the Massachusetts Institute of Technology and became an assistant professor of ceramics at MIT, and later (1963) an associate professor.

In 1965 Al left MIT and founded the ceramics graduate teaching and research program in the Metallurgy Department at what was then Case Institute of Technology, now a part of Case Western Reserve University. He continued to build the ceramics program, in particular by hiring some gifted faculty members and established what is generally recognized as one of the strongest programs of its kind. Al was made professor of ceramics at Case in 1968 and held that position until being named emeritus professor in 1992; by that time 40 percent of the Materials Science

and Engineering Department’s research was devoted to ceramics.

Alfred Cooper’s major contributions lie in three areas: he identified and quantified chemical and physical factors that govern the continuous glass melting process; he clarified the conditions necessary for the formation of glass and the relationship of the resulting structures to glass properties; and he was prominent as an educator of glass technologists and ceramic engineers.

Al’s work on glass melting enabled furnace designers and operators to increase the quality and quantity of glass fused in industrial furnaces. It is particularly effective in practical application, as it stems from his personal experiences during the early years he spent in glass manufacturing. His papers on mixing and melting of raw materials, heat transfer, and the flow of glass in furnaces are especially useful. Also valuable are his analyses of diffusion in glass and its effect on homogenization and refining of glass. His studies of the strength of glass fibers, particularly his classic work on field-assisted ion exchange, led to improvements in glass fiber strength.

In addition to clarifying the principles underlying glass manufacturing, Al made many contributions to a better understanding of glass structure. He was greatly interested in the random network theory of glass structure, and he eventually took a new approach, based network topology, that provided a general basis for a theory that fits most glassy systems and helps to account for their properties.

Those wishing to learn more about Cooper’s work are referred to the excellent Festschrift prepared by P. K. Gupta and A. H. Heuer on the occasion of his retirement. It may be found in the Journal of the American Ceramic Society, Volume 76 (1993) pp. 1077– 1080.

He had a deep conviction that international collaborations were important to the better understanding of glass phenomena and spent a substantial amount of time teaching and conducting research abroad. Al was a visiting professor at the University of Sheffield (1964 to 1965), at the Technical University of Clausthal, Germany, (1972 to 1973), the University of Padua, (1983), visiting lecturer at the Building Materials Research In

stitute, Beijing, (1983), and visiting professor at the Indian Institute of Technology, Kharagpur, (1986). He returned to India in 1988 as U. S. cochairman of the Indo-U. S. Workshop on Science and Technology of Glass at Bangalore. His international contributions were recognized by his election as fellow of the Society of Glass Technology (England), election to the Academy of Ceramics (Italy), and receiving the first President’s Award of the International Commission on Glass (Beijing, 1995).

His teaching and research resulted in approximately 150 technical papers on glass and ceramics, as well as frequent participation in symposia and conferences. He twice chaired the Gordon Research Conferences: the 1968 Conference on Ceramics, and the 1972 Conference on Glass. He was also active in the American Ceramic Society (ACerS), serving as both chair and trustee of the Glass Division, and was recognized by his peers by election as a fellow, and finally, as a distinguished life member.

After he retired from Case Western Reserve in 1992, he continued to come in to his office regularly to write and discuss both scientific and social issues with students and faculty. Al enjoyed a wide variety of activities; among them were golf and tennis, gardening, jazz and classical music, dancing, and travel. When he traveled abroad, he liked particularly to go by sea, for the long, uninterrupted opportunity for thinking, or by train, for the opportunity to truly see the countryside. He also read and wrote poetry all his life (his favorite poets were Wallace Stevens and Baudelaire).

Al Cooper was an outstanding and beloved figure in glass technology, whose contributions were recognized throughout the world. Beyond his accomplishments, however, was this wise and gentle man; coupled with his finely honed intellectual curiosity was a passion for rigorous solutions to problems—a philosophy that he conveyed effectively to his students. Admired by his students and colleagues for his integrity, he was modest about his own achievements and preferred to talk to others about their accomplishments. His warm, sincere interest in others encouraged a generation of young people.

Next: Georges A. Deschamps »
Memorial Tributes: Volume 10 Get This Book
×