Get This Book
Visit NAP.edu/10766 to get more information about this book, to buy it in print, or to download it as a free PDF.
« Previous: Alfred R. Cooper, Jr.
Page 66 Share Cite
Suggested Citation:"Georges A. Deschamps." National Academy of Engineering. 2002. Memorial Tributes: Volume 10. Washington, DC: The National Academies Press. doi: 10.17226/10403.
× 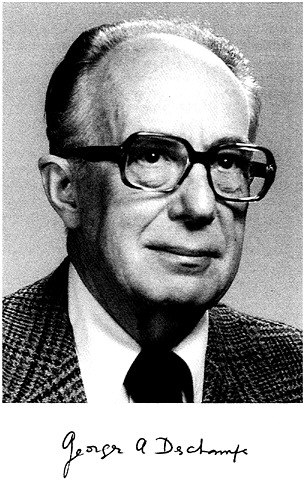 OUR FRIEND GEORGES A. DESCHAMPS passed away on June 20, 1998, at the age of eighty-six after a long illness.

Deschamps was born in Vendome, France, on October 18, 1911, and studied mathematics at the École Normale Supérieure in Paris, one of the famous French “grandes écoles. ” Always fascinated by theoretical physics, he received advanced degrees in mathematics and physics from the Sorbonne, also in Paris. Then he served in the French Army as a lieutenant before coming to the United States in 1937 to spend a year at Princeton University. After that he taught mathematics and physics for about ten years at the Lycée Français de New York.

In 1947 Deschamps gave up teaching and became a project engineer with the Federal Telecommunication Laboratories, a division of International Telephone and Telegraph (ITT), where, among his many responsibilities, he worked on direction finding and radio navigation systems. It was at ITT that Deschamps invented a special-purpose quaternion computer for the solution of problems in inertial navigation. Geometric techniques always played a central role in his research. For example, he presented a unified description of a variety of transmission line, waveguide junction, and polarization problems in terms of a simple geometrical model. Based on this model, he developed graphical solution methods that he implemented in his “hyperbolic protractor. ” In many of his studies, Georges was a true fore

runner. He developed a graphical representation of dispersion surfaces of wave propagation in magnetoplasmas and computed Fourier transforms by the fast Fourier transform method long before their “official appearance. ” He also suggested the early form of microstrip antennas before they become popular.

In 1958 Deschamps joined the University of Illinois at Urbana-Champaign as a professor of electrical engineering and director of the Antenna Laboratory. He discovered that a Gaussian beam can be represented by the radiation field from a point source located in a “complex” space. His discovery greatly simplifies many wave propagation problems of Gaussian beams. He worked the classical problem of diffraction by metal wedge, and developed a ray theory that is uniformly valid throughout transition regions near shadow boundaries.

From an engineering viewpoint, the biggest contribution Deschamps made is his formulation of the “divergence factor” of a ray pencil. The cross section of a ray pencil diverges or contracts as it is reflected from a material interface. Using his profound knowledge in geometry, Deschamps developed a matrix method for computing the divergence factor in an original and elegant manner. His method is being universally adopted in today’s radar community for solving problems ranging from designing “stealth” airplanes to tracing signals from cellular telephones.

After his retirement in 1982, Deschamps spent many of his working hours on his favorite subject, differential forms. He predicted that in the future, Maxwell’s equations would be taught by using differential forms instead of the present vector analysis. Judging by Deschamps record and his wisdom, his prediction may very well come true. Deschamps was a life fellow of the Institute of Electrical and Electronics Engineers (IEEE). He was elected to the National Academy of Engineering in 1978 with a citation that recognized his “contributions to electromagnetic scattering, microwave engineering, and laser beam propagation. ” In 1984 he received the IEEE Centennial Medal, and in 1987, the Antennas and Propagation Society Distinguished Achievement Award. He was an early participant and an active member of the International Scientific Radio Union.

Deschamps was a true scholar and an inspiring teacher. He was a man of great intellect, deeply insightful about electromagnetic theory, much sought after as a consultant by students and coworkers to whom he gave generously of his wisdom and expertise. Reserved, even shy, he was regarded with great affection by his many friends and colleagues. He indulged in his scientific endeavor and shared his knowledge, particularly his unique geometrical interpretation of electromagnetics, with colleagues even long after his retirement.

Next: J. Presper Eckert »
Memorial Tributes: Volume 10 Get This Book
×