Get This Book
Visit NAP.edu/10766 to get more information about this book, to buy it in print, or to download it as a free PDF.
« Previous: Georges A. Deschamps
Page 70 Share Cite
Suggested Citation:"J. Presper Eckert." National Academy of Engineering. 2002. Memorial Tributes: Volume 10. Washington, DC: The National Academies Press. doi: 10.17226/10403.
× 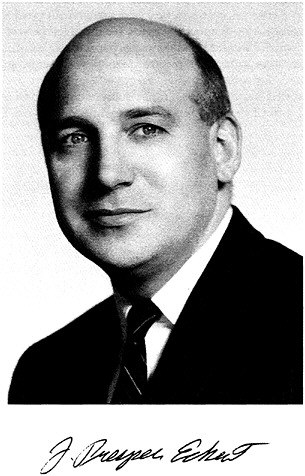 JOHN PRESPER ECKERT, or as he preferred, J. “Pres” Eckert, was born April 9, 1919, in Philadelphia, Pennsylvania. He received the bachelor of science degree from the University of Pennsylvania in 1941. His 1943 master of science degree in electrical engineering was from the University’s Moore School of Electrical Engineering. Pres and his wife, Judith, had four children and made their home in Gladwyne, Pennsylvania. He was known as a serious worker who wanted things done right. His family and his students at the university attest to his readiness to be helpful and his devotion to vigorous and healthy living. He died June 3, 1995, in Bryn Mawr at the age of seventy-six.

A brilliant student, Pres was named a part-time laboratory instructor in his second graduate year at the Moore School. His charge was to teach the principles of engineering to students from other fields with the goal of making them able to work effectively in the World War II effort. His class comprised more than thirty students, sixteen of whom had their Ph. D. s. It was through that course that he met John W. Mauchly, whose doctorate was in physics.

In 1942 and 1943, Eckert became involved in improving a version of Vannevar Bush’s differential analyzer, invented at the Massachusetts Institute of Technology. After considerable success, Mauchly and he discussed how much further its performance could be improved by more precisely machined parts and

carefully controlled, air-conditioned space. They decided that this path was not fruitful. Together, they invented a digital differential analyzer, which was an electronic version of the mechanical Bush machine. Because it inefficiently counted pulses sequentially, they decided to build a machine that would use some sort of coded binary decimal system. This work proceeded slowly at first, because Eckert was doing graduate work and Mauchly was teaching. Mauchly then had the idea that an electrical device could be built that would have places to hold numbers, add numbers, and integrate equations. At that time, the only fast input and output equipment used punch cards, so the system had to be a combination of binary and coded decimal. But those ideas were sketchy.

Eckert contributed the engineering designs that made Mauchly’s proposal practical. In early 1943, Mauchly wrote up their joint plans for this new type of computer. The Moore School knew that the army had critical needs for computing and that no existing machine was satisfactory. Using electromechanical calculators, the army was actively preparing ballistic tables to be used by the artillery crews in battle to determine the trajectories of missiles. The results were not very accurate. Thus, it was decided to seek funding for this proposed project from the U. S. Army Ballistics Research Laboratory in Aberdeen, Maryland. The presentation of the Eckert-Mauchly proposal was made by the department’s administrator, John Brainard. Sometime before this date, Eckert had begun work on a mercury tank for measuring timing signals in connection with radar, arising from a request by MIT’s Radiation Laboratory. Although this work had to be abandoned when the new project started, it would be important later.

The Eckert-Mauchly computer proposal was approved on April 9, 1943, and $150,000 was allocated for a machine with ten accumulators, a means for taking square roots using the Newton-Rapson method, and one function table with 104 entries, and so on. As time went on, the number of accumulators was doubled, a square root divider was substituted, and three function tables were mandated. The machine grew from eighteen panels to something like forty panels, and the appropriation was

increased to about $400,000. Thus, the basis was in place for the development of the Electronic Numerical Integrator and Computer (ENIAC). Eckert was designated chief engineer on the project.

The ENIAC project called for vacuum tubes (transistors were not yet invented) and 18,000 were eventually used. Initial efforts were spent in learning how to extend their lives by reducing plate voltages and filament currents. Other memory ideas, such as recording magnetically on disks, were contemplated, but military urgency dictated that there could be no distraction from using vacuum tubes. There was external criticism about the mathematical basis for the calculations, which turned out later not to be important. On the hardware side, many questioned the feasibility of making 18,000 vacuum tubes work without failure for any significant length of time. Although statisticians predicted a mean free-path error of a couple of minutes, the results were greater by a hundred times or more than such predictions, or a lifetime of about 2,500 hours for each tube.

A staff of twelve professionals was involved in the development, and Eckert had to make the equipment decisions and the staff assignments, coordinate the activities, and finally develop means for testing the computer. Mauchly was more interested in programming, although he did some of the engineering, particularly in the final debugging of the completed machine. The computer was completed and ran its first real task in 1946. It measured about 2. 5 meters in height and twenty-four meters in length. Programming was done by plug boards and switches. The computer, which was to operate until 1955, was more than 1,000 times faster than its electromechanical contemporaries and could execute up to 5,000 additions per second. An important feature was the subroutine scheme, which allowed the user to do an operation over and over until some criterion was met. This was handled through a special panel called a master programmer. Eckert explained, “The process of computing was carried on by ‘accumulators. ’ Accumulators differ from a mechanical adding machine both because they are electronic and because you can control their start and finish, simultaneously transmit a number to one place as positive and to another as negative, and so forth. ”

Eckert and Mauchly founded the Electronic Control Company in October 1946. Their first order was received from Northrop Aircraft Company. That machine, called the Binary Automatic Computer (BINAC), was principally different in that it stored data on a magnetic tape rather than on punched cards.

The Electronic Control Company was renamed the Eckert-Mauchly Computer Corporation in 1949. They received an order from the National Bureau of Standards to build the Universal Automatic Computer (UNIVAC). Memory was the big problem—it finally evolved that a hierarchy of memories was necessary, as in today’s computers. This was the first breakthrough. The second was the improvement of the subroutines, which led to internal programming. The UNIVAC, the first digital machine to be produced commercially in the United States, was delivered in 1951 to the United States Census Bureau. Eventually, forty-six UNIVACs were built. For the first time in computer history, a computing device was able to handle both numerical and alphabetical information with equal success. Mauchly, twelve years older than Eckert, left the company in 1950 and started his own consulting firm. He died in 1980.

In 1968 the Honeywell Corporation challenged the patents covering the invention of the ENIAC computer. The presiding judge ruled in favor of Honeywell’s claim that John Mauchly’s ideas for electronic devices were obtained from meetings with John Vincent Atanasoff during a visit to Iowa in 1941. In an interview in 1981, Eckert stated that he and Mauchly had invented the computer “in the same sense that Edison invented the lightbulb. ” He said, “there were people who thought of the idea and tried to build one, but it didn’t work very well. ”

In 1964 J. Presper Eckert received an honorary D. Sc. degree from the University of Pennsylvania. He was elected a member of the National Academy of Engineering in 1967. In January 1969 the National Medal of Science was awarded to Eckert by President Lyndon B. Johnson. In April 1969 he was awarded honorary membership in the Information Processing Society of Japan, and the “Eckert Award” was established in his honor for authors of best computer treatises. The Franklin Institute presented him with the Philadelphia Award in 1973.

Next: Howard W. Emmons »
Memorial Tributes: Volume 10 Get This Book
×