Get This Book
Visit NAP.edu/10766 to get more information about this book, to buy it in print, or to download it as a free PDF.
« Previous: Donald F. Galloway
Page 94 Share Cite
Suggested Citation:"H. Joseph Gerber." National Academy of Engineering. 2002. Memorial Tributes: Volume 10. Washington, DC: The National Academies Press. doi: 10.17226/10403.
× 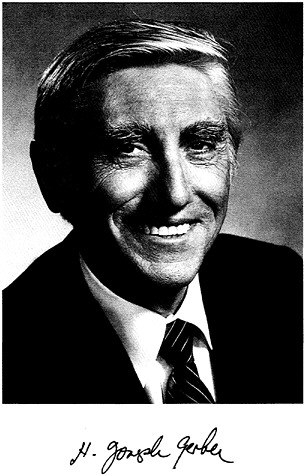 Joe was born on April 7, 1924, in Vienna, Austria. He became a U. S. citizen in 1945. He was imprisoned in a Nazi labor camp at age fifteen, and came to the United States from Vienna about 1940. He arrived with few possessions and without a strong command of English. He graduated from Rensselaer Polytechnic Institute in Troy, New York, with a B. S. degree in aeronautical engineering in 1946. He started inventing new measurement and calculation tools while in college. In 1948 Joe founded Gerber Scientific with about $3,000. The company, based in South Windsor, Connecticut, now employees about 28,000 people and had revenues of just under $600 million in fiscal year 1999. He is survived by his wife, whom he married in 1953, a son, who is a director and a vice-president of business development and technology strategy at Gerber Scientific, and a daughter. Mr. Gerber is a classic rags-to-tech-riches story. He had over 648 U. S. and foreign patents issued in his name.

As a junior at Rensselaer, he invented a graphical numerical computer called the Gerber Variable Scale. At the time, it was called the most revolutionary engineering tool since the slide rule. It was the first product to launch the Gerber Scientific

On September 14, 1994, H. Joseph Gerber was awarded our nation’s highest honor for technological achievement, the National Medal of Technology, for his contributions toward advancing manufacturing technology through his many inventions and for his significant contributions to our nation’s economic competitiveness. The citation for Mr. Gerber’s award reads: “For his past and continuing technical leadership in the invention, development and commercialization of manufacturing automation systems for a wide variety of industries—most notably apparel— that have made those industries more efficient and cost-effective in today’s worldwide competitive environment. ” The award was bestowed by Vice President Al Gore.

In nominating Mr. Gerber for the award, Roland W. Schmitt, president emeritus of Rensselaer Polytechnic Institute, said, “It is my belief that this dynamic individual embodies the very essence of what the award represents; he is a prolific inventor, a successful entrepreneur, and a highly accomplished engineer. ”

Annual Connecticut Medal of Technology. Professor D. Allan Bromley of Yale University, chairman of the selection committee, stated that Mr. Gerber was presented Connecticut’s First Medal of Technology Award for “His extraordinary achievements in commercialization of technology in one or more of the areas of process and product innovation management that has made a significant difference in Connecticut’s industrial competitiveness. ”

For nearly a quarter of a century, Mr. Gerber made exceptional technological contributions that rank among the milestones in the history of the textile industry. The innovation for which Joe Gerber is best known is the GERBERcutter®, which automatically cuts large quantities of material with a computer controlled knife and is considered to be the industries single most important advancement in this century. The American Apparel Manufacturer’s Association has stated that the GERBERcutter® was a significant weapon in the apparel industry’s ongoing fight for market share against low-wage imports. Furthermore, his inventions played a major role in allowing the apparel industry to maintain a large and diverse domestic production base, providing jobs for thousands of Americans.

The first production unit of the GERBERcutter® is now in the possession of the Smithsonian’s National Museum of American History in Washington, D. C. The unit was originally sold to General Motors Fisher Body Division in 1970 and for more than twenty-two years was in continuous operation cutting car seat covers and other soft goods for automobile interiors. Three of Mr. Gerber’s original scientific instruments are also in the permanent collection of the National Museum of American History. All three artifacts—the Variable Scale, Graph Analogue, and Derivemeter—were on display in the museum exhibition titled “Information Age: People, Information, and Society” in 1994.

In recognition of his technical contributions, Joe Gerber was awarded an honorary doctor of engineering degree by the Rensselaer Polytechnic Institute in 1981 and by the University of New Haven in 1990. He was elected to the National Academy of Engineering in 1982. His citation read: “By combining pragmatism with imagination, and hard work with optimism, he has become one of American’s most prolific and successful inventors. ” He was elected to membership of the Connecticut Academy of Science and Engineering in 1983. He was a recipient of the Connecticut Patent Law Association’s Tenth Annual Eli Whitney Award in 1980, the Holden Medal for his outstanding contribution to the advancement of technology in the apparel industry in 1983, the ORT Science and Technology Award in 1988, the Lifetime Achievement Award in Entrepreneurial Management in 1989, and the Companion Membership Award of the Textile Institute in 1993.

Dr. Gerber served on the board of directors of the following organizations: Boston Digital Corporation in Milford, Massachusetts; Beta Engineering and Development Ltd. , Been Sheva, Israel; and the Phoenix Mutual Insurance Company in Hartford, Connecticut. He was a trustee for the Hartford Graduate Center in Hartford, and an honoree trustee of the Rensselaer Polytechnic Institute in Troy, New York.

Next: Edward L. Ginzton »
Memorial Tributes: Volume 10 Get This Book
×