Get This Book
Visit NAP.edu/10766 to get more information about this book, to buy it in print, or to download it as a free PDF.
« Previous: Front Matter
Page 1 Share Cite
Suggested Citation:"Frederic W. Albaugh." National Academy of Engineering. 2002. Memorial Tributes: Volume 10. Washington, DC: The National Academies Press. doi: 10.17226/10403.
× 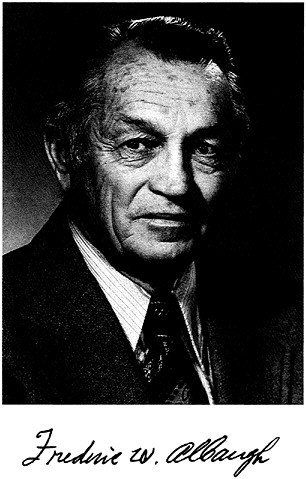 FRED WAS BORN IN ALBIA, IOWA, received a B. A. degree in chemistry from the University of California, Los Angeles, in 1935; an M. S. degree in chemistry from the University of Michigan in 1938; and a Ph. D. in chemistry from the University of Michigan in 1941. He was a research chemist with Union Oil Company in Wilmington, California, from 1941 to 1943 and 1945 to 1947; and a highly respected research chemist with the Manhattan Project from 1944 to 1945. His wife, Edrey, was also with the Manhattan Project. He played a major role in the project and at the Hanford Plant with General Electric Company in developing a series of increasingly effective processes for separating plutonium from irradiated uranium fuel. For example, the waste generated per ton of irradiated fuel processed decreased thirty-fold over a period of only one decade as a result of the reprocessing developments for which Fred furnished much of the vision in addition to providing and developing world leadership in a brilliant, but self-effacing way. He also provided leadership in developing processes for extracting desired isotopes from high-level wastes and for vitrification of the wastes.

He played an important role in the formation of the Hanford Laboratories in 1956 to integrate all the research and development activities formerly spread across the Hanford site in separate organizations dealing with reactors, fuels, reprocessing, and

other technical operations. He then envisioned and implemented a program for peaceful use of plutonium. With the help of many other organizations worldwide, particularly other U. S. laboratories such as those operated by Argonne National Laboratory at Idaho Falls, Idaho, processes were developed for a wide range of plutonium, uranium, and thorium ceramic, metal, and cermet fuels. These were successfully tested in many reactors in the United States and in other countries. Perhaps most important was the conception, building, operation, and decommissioning of the Plutonium Recycle Test Reactor. The reactor was built for $2. 3 million less than the $15 million cost estimate while meeting the two-year schedule and operated from 1963 to 1968. This program was an important part of the foundation for a wide range of government and industrial activities, including both thermal and fast reactors, isotopic heat sources, nuclear rockets, and, perhaps most important, the present awesome commitment to disposal of large quantities of weapons materials. These activities have ranged from fundamental property measurements to urgent safeguards, transportation, and waste disposal problems.

In 1964 a management “revolution” occurred at Hanford, partly as a result of a joint diversification study by Albaugh and Paul Holstead of the Atomic Energy Commission (AEC). Operations originally managed by General Electric Company were opened to bids from other organizations. As a result, Battelle Memorial Institute assumed responsibility for operation of the laboratories as Pacific Northwest Laboratory (PNL—later, Pacific Northwest National Laboratory [PNNL]) or Battelle North-west, with Sherwood Fawcett as the director. Battelle provided a major financial contribution, which resulted in building a series of facilities, starting with a $20 million Richland Research Complex. Ultimately, these expanded to include the Sequim Marine Sciences Center on the Washington coast and the Behavioral Science Center in Seattle, Washington. The long-time medical, environmental, and related studies of medical isotopes—their measurement, problems, and uses—survived these revolutions and continued as a world-class Life Sciences Center pioneered by Dr. William Bair as part of PNL.

Overlapping this major management change was another vision of Fred’s—a large (400 megawatt) fast reactor test facility and supporting facilities, which could evaluate breeder reactor fuels and materials under a range of operating conditions. Responsibility for the actual construction and successful operation of this and other facilities was assumed by Westinghouse. The transfer of many Battelle employees to Westinghouse (with Battelle employment dropping from 2,300 to 1,300 mostly because of this change) left a new and potentially fatal problem for Battelle. But this was successfully met by another “revolution” in which Fred played a major role, ultimately as director of the Battelle Northwest Laboratory from 1967 to 1970. The challenge was to negotiate with the Atomic Energy Commission an “1831 Contract” which would provide permission for Battelle to do research and technology transfer to industrial and other organizations, as well as the AEC or other government organizations. Thanks to the dedication and statesmanship of both government and Battelle employees, the contract was successfully negotiated, and subsequent accomplishments from “a unique mix of science and application with a wide range of customers” have been remarkable. One of the first and most impressive of these was the launching of the Exxon Nuclear Fuel organization.

Ron Liikila, a long-time protégé recently summarized the decades-long evolution inspired and led by Fred Albaugh: “Through thirty years of change, researchers have invented dozens of technologies with a major impact on environmental restoration, energy conservation, health and national security. At critical points during those thirty years, PNNL also has reinvented itself, using its innovation and creativity to turn crisis into opportunity. That’s the wave of the future. ” The recent construction and operation of the Environmental Molecular Sciences Laboratory as a collaborative, multidisciplinary research institute is a good example of this vision as well as a monument to the recently deceased PNNL Director Bill Wiley who made it happen.

retirement in 1983. He was a superb writer and was the author of many papers and patents, many of which are still classified. Government missions included Australia and Europe, and he was adviser to the U. S. -Canada Joint Program Heavy Water Reactors. He was active in community activities such as the Washington State Human Rights Commission and the Washington State University Advisory Group. He was a fellow of the American Nuclear Society and the American Institute of Chemists, and he was a member of the National Academy of Engineering, American Chemical Society, American Association for the Advancement of Science, Sigma Xi, Phi Lambda Upsilon, and Alpha Chi Sigma.

He is survived by his wife, Edrey Albaugh, and three children, their spouses, and four grandchildren: Jeffrey S. and Francine Albaugh of Portland, Oregon; James F. and Audrey Albaugh of Los Angeles, California; Jean A. and Gale McKnight of Anchorage, Alaska; grandchildren—Kestly and Stephen Albaugh and Lee and Lindsey McKnight, and brother, Marion D. Albaugh, of Olympia, Washington.

Next: Harvey O. Banks »
Memorial Tributes: Volume 10 Get This Book
×