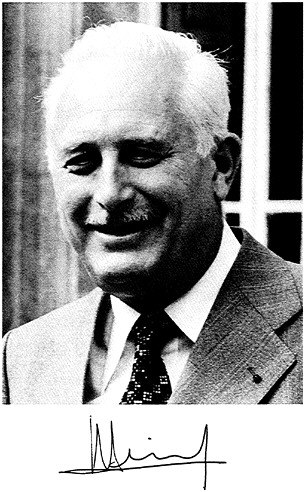 ON JULY 27, 1997, one of the French nuclear energy community’s most prominent figures, André Giraud, died. A former administrator general of the French Atomic Energy Commission from 1970 to 1978, minister of industry from 1978 to 1981, and minister of defense from 1986 to 1988, André Giraud was involved in all major decisions that resulted in the French national nuclear electricity program. André Giraud was a friend to the United States. During his career he developed a privileged relationship with all major nuclear scientists and representatives and in 1977 became a foreign associate of the U. S. National Academy of Engineering. In 1980 Giraud received the prestigious American Nuclear Society/Nuclear Energy Institute Henry DeWolf Smyth Award.

André Giraud was born in Bordeaux, France, on April 3, 1925. He was a graduate of École Polytechnique (Paris), École Nationale Supérieure des Mines (Paris), and École Nationale Supérieure du Pétrole. From 1949 to 1950, André trained in the United States, focusing on the petrochemical industry. He then resumed his career in France, working as a researcher, then executive vice-president, of the French Institute of Petroleum from 1951 to 1964.

Between the years of 1964 and 1990, André was either in charge of, a member of, or worked with many important institu

Other achievements attained by André Giraud between the years of 1974 and 1994 include being chairman of the French Scientific Council of Defense, chairman of the International Advisory Board of the Elf Group, and president of École Polytechnique.

Along with the Henry de Wolfe-Smythe Award, André also received the Foratom Award given by the European Nuclear Society, the Honorary Medal of the French Nuclear Society, and various French and foreign decorations, including Commandeur de la Légion d’Honneur.

This long and wide-ranging career in service to France was indicative of André Giraud’s capabilities as an administrator and an imaginative leader. In international relations he was recognized as a politician of exceptional vision and dimension. He emphasized long-term perspectives, while alertly considering near-term steps. He was an intuitive and knowledgeable diplomat who established warm personal relationships with members of foreign governments. This was particularly important to France in the key area of energy supplies during a time when oil and gas imports faced much international turbulence.

André Giraud was actively involved in keeping France in the forefront of international science and technology. His outstanding intellect, exceptional capacity for synthesis, and openness to imaginative innovation made him a persuasive leader of the French technology scene. He was an active promoter of new concepts and was able to put them into practice by his great ability to organize and manage the implementing institutions. His footprints are evident throughout many French national programs, including programs in the space, military, and energy fields. He was deeply involved in the development of the French nuclear power system, making it one of the world’s best, and he was committed to the goal that it become a long-term

indigenous resource for the country. He courageously took the responsibility of abandoning the early French uranium-graphite reactors and adopting the U. S. -developed pressurized water reactors, and supported a fast breeder project to achieve uranium independence.

André Giraud was one of the most prestigious foreign associates of the National Academy of Engineering. As a consequence of his warm and friendly personality, and his consideration for all he worked with, he will remain in the memories of a long list of friends and associates.