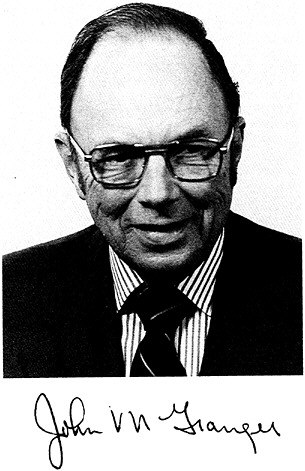 JOHN VAN NUYS GRANGER, antenna and telecommunications expert, entrepreneur, and public servant, died December 1, 1997, in Cirencester, England. He was born in Cedar Rapids, Iowa, on September 14, 1918. After attending the Cedar Rapids Academy of Art, he graduated from Cornell College, Mt. Vernon, Iowa, with a B. A. degree in mathematics and physics in 1941. He did graduate work at Harvard University, where he earned an M. S. degree in communications engineering in 1942 and a Ph. D. degree in applied physics in 1948. From 1942 to 1946, he was a civilian employee of Harvard University in the Radio Research Laboratory and the American-British Laboratory and was a technical observer for the NDRC Division 15 with the U. S. Forces in Europe from 1944 to 1945.

Following completion of his doctorate, John joined the Stanford Research Institute in Menlo Park, California. As assistant director of engineering, he directed the research programs for U. S. government sponsors and prime contractors. His own research was concentrated on aircraft antennas, especially slot antennas that could be mounted flush with the aircraft surface and thus minimize aerodynamic drag. He was author or coauthor of numerous technical reports and journal articles on design and measurement of antennas of this class and on their integration into telecommunication systems.

In 1956 he founded Granger Associates in Palo Alto, California, and served as president. Initial emphasis was on antennas, especially broadband antennas of the log periodic type, and two unique products, ionospheric sounders to optimize short wave transmissions, and null-field precipitation static dischargers to minimize the buildup of electrostatic charge on aircraft surfaces. These dischargers became standard equipment on all jet aircraft made in the United States. A wide range of communication equipment followed. Because there was broad international acceptance of the systems, two subsidiaries were formed, Granger Associates Ltd. , Weybridge, England, and Granger Associates (Pty) Ltd. , Sydney, Australia, with John as chairman. His concern was that all Granger Associate products be of high quality and that all employees feel a sense of pride in their contribution and in the company. Indeed there was a strong sense of family among Granger Associate employees.

John was active in his professional societies, serving as a director of the West Coast Electronics Show, WESCON, as an editorial reviewer for the Institute of Radio Engineers, and as editor of its Transactions on Antennas and Propagation. In the Institute of Electrical and Electronics Engineers (IEEE), he was a member of the awards board, chairman of the Finance Committee, and treasurer. He was a member of the IEEE board of directors and executive committee of IEEE and was elected its president in 1970. This was a time of rapid growth of the institute, and to give proper attention to the issues of this growth, John resigned his presidency of Granger Associates.

Following completion of his term as IEEE president, John spent the remainder of his career in government service with emphasis on policy concerning international issues of science and technology. With the Department of State, Washington, D. C. , 1971 to 1975, he was acting director of the Bureau of International Scientific and Technological Affairs and deputy assistant secretary, Bureau of Oceans. With the National Science Foundation, 1975 to 1977, he was deputy director of the Office of Science and Technology Policy and deputy assistant director for scientific, technological and international affairs. He was Counselor for Scientific and Technological Affairs for the U. S. Em

bassy, London, and Science Attaché to the U. S. Embassy in Paris. The issues he saw in these assignments led to the well-received book Technology and International Relations (W. H. Freeman and Company, 1979).

On the basis of John’s technical, management, and policy contributions, he was elected to the National Academy of Engineering in 1975. Among other recognitions he received were the Outstanding Young Electrical Engineer Award of Eta Kappa Nu in 1952, the IRE’s Seventh Region Electronic Achievement Award in 1955, and fellow status in the IEEE.

Following retirement in 1983, he moved with wife, Jill (Norah Frances) to a 300-year-old stone cottage in the Cotswolds area of England, where he concentrated on nontechnical writing. There resulted manuscripts on A Driving Guide to the Cotswolds, several children’s stories, and a family history, Walloping Window Blind. He is survived by his wife, Jill, a daughter, Pamela Marks, of Woodside, California, sons, John, of Issaquah, Washington, and David of Golden, Colorado, and three grandchildren. Family, friends, and colleagues remember him for his keen intellect, his sense of humor, his breadth, and his insistence on quality and high ethical standards in all organizations with which he was associated.

Next: John E. Gray »
Memorial Tributes: Volume 10 Get This Book
×