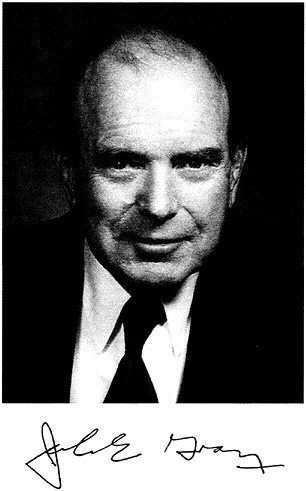 BY JULIAN STEYN SUBMITTED BY THE NAE HOME SECRETARY

JOHN EDMUND GRAY, a leading international figure in the development of nuclear power and a retired executive of numerous energy management and consulting organizations, died of a brain tumor at the home of his only daughter, Jane Redmond, in Waterville, Maine, on October 20, 1997. He had lived in Alexandria, Virginia, for the previous three decades.

John, known to close family, as Jack, one of four children, was born in Rhode Island in 1922. After high school he worked for one year at the Woonsocket Rayon Company, a local firm in the Rhode Island town where he grew up. In 1943 he earned a B. S. degree in chemical engineering from the University of Rhode Island, where he worked several campus jobs to help pay expenses.

After college John became a participant in the Manhattan Project, and during 1945 and 1946 he served in the United States Army. Between 1943 and 1960 John held the following positions: engineer with Westinghouse Research Laboratories and the General Electric Company’s General Engineering and Consulting Laboratory; materials administrator, U. S. Navy Nuclear Reactors Branch; and director, Technical and Manufacturing Division of the Atomic Energy Commission’s Savannah River Operations. In 1954 he became the project manager for construc

tion of the first commercial nuclear power plant in the United States, the Shippingport Atomic Power Station in Pennsylvania.

In 1960 John entered the commercial private sector by starting up NUS Corporation (now a division of Scientech, Inc. ), where he held the posts of president, chairman, and chief executive officer at various times. NUS became a consulting and engineering firm that provided energy and environment-related technical services to U. S. and foreign utility and energy companies, with the focus initially on nuclear power. During his years at NUS, he established affiliated companies in Germany and Japan, NIS GmbH and Japan NUS.

From 1972 to 1976, John served as a consultant to the Ford Foundation Energy Policy Project, the Massachusetts Institute of Technology Center for Energy Policy Alternatives, and the National Science Foundation and as the manager of the Edison Electric Institute’s Nuclear Fuel Supply Study Program.

John established International Energy Associates Limited (IEAL), a Washington-based energy consulting firm, in 1975 and served as its chairman and chief executive officer until 1985, when it was acquired by ERC International, Inc. (ERCI). He served from 1985 to 1990 as president and vice-chairman of the board of directors of ERCI, and from 1988 to 1990 as chairman and chief executive officer of ERC Environmental and Energy Services. He also served as director of IEAL Energie Consult GmbH (Germany) and Evaluations Recherches Conseil (France), affiliates of ERC. He served as chairman of IEAL of Japan Company Ltd. , which he cofounded in 1982, until his death in 1997.

John was recognized for his almost half century of energy development activities by his election in 1992 to the National Academy of Engineering for technical leadership in nuclear materials production, early nuclear power programs, environmental safeguards, and formulation of national energy policy. Between 1993 and 1995, he served on the Academy’s Public Information Advisory Committee and the Committee on Foreign Participation in U. S. Research and Development.

until his death; and from 1985 as the Atlantic Council’s vice-chairman. He served as chairman of the Council’s U. S. -Japan Energy Policy Dialogue from 1980 until 1997. In 1983 he was elected a director of the U. S. Energy Association and served as its chairman between 1990 and 1992; in 1987 he was appointed the U. S. member of the World Energy Committee on Energy Issues of Developing Countries. He was a director and member of the executive council of the American Society of Macro Engineering.

John was a trustee of the Atlantic Council Foundation, the Cathedral Choral Society of Washington, D. C. , and the University of Rhode Island Foundation. During the 1990s he served on the board of directors of numerous companies engaged in the energy field.

John authored, coauthored, and edited numerous books, articles, and speeches during his life in the energy business.

Energy Daily publisher, Llewellyn King said of John, “Gray was a captain of the U. S. nuclear industry, and one of the wisest and wittiest of a generation of exceptional men. ” Former General Dynamics chairman and chief executive officer, Hilliard Paige, described him as “an admired world leader” in the field of energy and “a class act. ” At John’s memorial service in historic Christ Church in Alexandria, Virginia, Paige described him as “Richard the Lion Hearted, the leader of Crusades, with just enough P. T. Barnum in him. ” At the memorial, Joseph Harned of the Atlantic Council said, “I never met a man who could do so many things so well. He was ferocious about getting things right. And I never met anyone who was right so often. ” Ms. Eliane Lomax of the Atlantic Council wrote in sympathy to Jane that her father’s professional life embraced “worthy goals, quality of execution, and thoughtfulness to colleagues. ” Ms. Lomax added, “Whenever I can, I try to pass on to those younger or less experienced the lessons in mentorship I learned from him as my way to thank and remember him. ”

While his “can-do” attitude and his incredible focus always impressed those who knew John in business, there was also a gentle and caring side to him. His younger son, Jeffrey, has spoken of the regular Saturday lunches he spent with his dad at the

local bagel shop in the 1990s. During these sessions, Jeff said his dad would philosophize in terms like “there are no big deals,” or perhaps “look to this day, for it is life,” or “expect nothing and have gratitude for everything. ” Over the years he spent a lot of time in Japan, and had a deep appreciation for the people and the culture, and was extraordinarily well liked by friends and colleagues in that country. Again, he could be a joyous man, particularly when it came to such pleasures as sailing, and for many years he did that regularly on the Chesapeake Bay.

In another demonstration of John’s caring and thoughtfulness, only a few weeks before he died he arranged with his daughter to establish a $300,000 scholarship to benefit students at the University of Rhode Island. He did so in order that they would not have to work numerous odd jobs as he had done, but could instead focus on becoming good engineers and participating in campus extracurricular life.

Only one month before his death, John Gray was one of ten graduates inducted into the University of Rhode Island College of Engineering’s first Hall of Fame class—a fitting tribute for a truly remarkable man. The writer and his wife, Stephanie, have very fond memories of a dear friend who we feel is still with us— for the writer, a friend for more than thirty years.

Next: Richard W. Hamming »
Memorial Tributes: Volume 10 Get This Book
×