Get This Book
Visit NAP.edu/10766 to get more information about this book, to buy it in print, or to download it as a free PDF.
« Previous: Richard W. Hamming
Page 126 Share Cite
Suggested Citation:"N. Bruce Hannay." National Academy of Engineering. 2002. Memorial Tributes: Volume 10. Washington, DC: The National Academies Press. doi: 10.17226/10403.
× 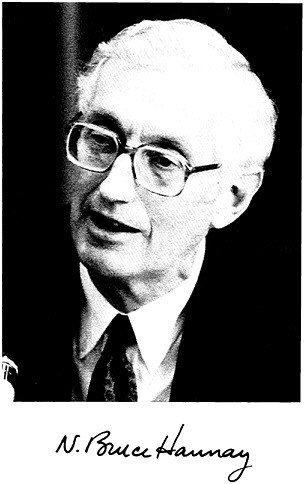 N. BRUCE HANNAY, retired vice-president for research and patents of Bell Laboratories and former foreign secretary of the National Academy of Engineering, died on June 2, 1996, at Harrison Memorial Hospital in Bremerton, Washington. He was a resident of Port Ludlow, Washington, where he and his wife, Joan, had lived since 1989.

Bruce was born on February 9, 1921, in Mt. Vernon, Washington, and was a descendent of early Scottish settlers in the area. He lived in Seattle until leaving for Swarthmore College, where he was elected to Phi Beta Kappa and graduated summa cum laude with a B. A. degree in chemistry in 1942. He received his M. S. and Ph. D. degrees in physical chemistry in 1943 and 1944, respectively, from Princeton University, where he studied the dipole moments of molecules with C. P. Smyth, one of the pioneers in the field. This work, during the remarkably short period of two years between his bachelor’s and Ph. D. degrees, resulted in five published papers. He was also involved in the Manhattan Project during this period.

Immediately after receiving his Ph. D. , Bruce joined the Research Division of Bell Laboratories and focused on the chemical and physical aspects of electronic materials and processes. His fundamental studies included thermionic emission, electron

attachment and ionization phenomena in molecules, and the mass spectrographic analysis of solids. The latter work led to important techniques for the identification of trace impurities in solid-state electronic materials.

In 1954 Bruce was placed in charge of a group engaged in the chemical physics of solids. This group did pioneering work on the chemical and electronic properties of semiconductors and, later, solid-state laser materials. Some of the work of this group lead to the creation of the first silicon transistors. Bruce’s later research interests centered on superconductivity, and he was the first to suggest and demonstrate that intercalated (layered) compounds could be superconductors.

At Bell Laboratories Bruce rose through the research managerial ranks. He was appointed director of the Chemical Research Laboratory in 1961 and executive director, Materials Science and Engineering, in 1967. He became vice-president of Research and Patents in 1973 and retired from that position in 1982.

As foreign secretary of the National Academy of Engineering in 1976, Bruce initiated a series of studies on international competitiveness, a response to the Academy’s and his own concerns about the changes in the position of the United States relative to the rest of the world, especially Japan and Europe. These changes were just becoming visible, and the work Bruce initiated was among the first to bring a bright spotlight onto the fact that our long competitive lead in technology and manufacturing had significantly shortened and, in some areas, was questionable. That stimulated other work at the National Academies and was a significant part of the activity that stimulated much introspection in industry and government and that eventually significantly improved our national competitiveness.

A prolific author, Bruce produced some eighty technical papers and authored the book Solid State Chemistry. He edited the book Semiconductors, which was one of the earliest (1959) authoritative texts devoted to the modern understanding of the chemical and physical properties of these important materials. He was the editor of the series Treatise on Solid State Chemistry and coeditor of the books Electronic Materials and Taxation, Technology and the U. S. Economy. He also served on the editorial boards of

many of the leading solid-state journals including the Journal of Solid State Chemistry, Materials Science and Engineering, and Revue de Chimie Minerale among others.

Bruce’s activities in corporate, governmental, academic, and professional organizations were legion. He was a member of the boards of Rohm and Haas, General Signal, Plenum Publishing, and a family of mutual funds of Alexander Brown & Sons. He was a member of the Science and Technology Advisory Councils at Atlantic Richfield, Chrysler, Comsat, Inco, Merck, Sci/Tech Holdings, SRI, and United Technologies. He was a member of the governing board of the National Research Council (NRC), the Solid State Sciences Committee, the National Materials Advisory Board, and the Report Review Committee of the NRC, a member of the National Academy of Sciences Committee for Joint US-USSR Study of Fundamental Science Policy and the Committee for the Survey of Materials (COSMAT). He was a consultant to the National Laboratories at Brookhaven, Lawrence Livermore, and Sandia and to the Organization for Economic Cooperation and Development, International Institute for Applied Systems Analysis, and the Alexander von Humboldt Foundation. He was a frequent adviser to the White House, congressional committees, the Departments of Defense, Commerce, State, and Transportation, the Science and Technology Policy Office of the National Science Foundation, the Office of Tech

nology Assessment, the National Bureau of Standards, and the Office of Science and Technology.

Bruce received many recognitions of his contributions, including two of the most prestigious honors for a chemist, the Perkin Medal of the Society of Chemical Industry, and the Gold Medal of the American Institute of Chemists. He was also the recipient of the Industrial Research Institute Medal, the Acheson Medal of the Electrochemical Society, and was the Monie A. Ferst Memorial Lecturer at the Georgia Institute of Technology and the Almquist Lecturer at the University of Idaho.

Bruce Hannay was a man of many talents that he devoted to his country, his profession, his company, and his family. He is survived by his wife, Joan, who continues to live in Port Ludlow, Washington, and his two daughters, Brooke Meecher of Olympia, Washington, and Robin Nelson of McLean, Virginia. He is deeply missed by all of us.

Next: Clair A. Hill »
Memorial Tributes: Volume 10 Get This Book
×