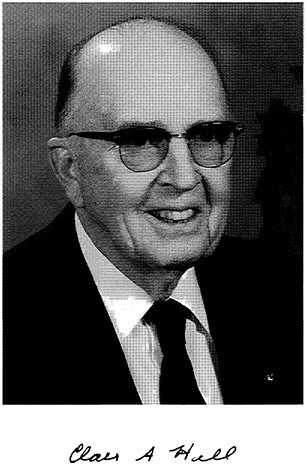 CLAIR HILL, cofounder of CH2M-Hill, the internationally recognized firm of engineering consultants, died on April 11, 1998. He was eighty-eight years old.

He was born on April 20, 1909, in Redding, California. After studying forestry at Oregon State University, he graduated from Stanford University in 1934 with a degree in civil engineering.

After a brief stint with Standard Oil Company (now Chevron) and the California Department of Transportation, he returned to Redding to form his own firm, Clair A. Hill and Associates, specializing in water resources and mapping. From 1941 to 1945 he served in the U. S. Army in a bomb disposal and ordnance unit in the Aleutian Islands, returning in 1945 to reactivate his engineering firm in Redding. He became one of the principal authors of the California Water Plan Commission and was considered as principally responsible for its subsequent adoption and implementation. In 1971 his firm merged with CH2M to become CH2M-Hill, where he served as the California regional manager until his retirement in 1976.

Clair Hill early recognized the importance of photogrammetry and the computerized solutions to problems in water resource engineering and planning. It was his interest in water resources and agriculture that led to his proposing and developing the idea for creation of the Whiskeytown Lake Reservoir in Northern California. In 1968 Congress and the president renamed the dam

“The Clair A. Hill Whiskeytown Dam,” a rare honor for a person still living.

Throughout his career, Clair Hill was at the heart of water planning and development in California, serving on the California Water Commission from 1949 until the mid-1990s, including a tour as chairman. He was the commission’s only honorary life member.

Clair Hill received numerous awards and honors for his work in water resources, including an honorary lifetime membership in the American Society of Civil Engineers and the Association of California Water Agencies Lifetime Achievement Award. He was elected to the National Academy of Engineering in 1992.

Clair Hill enthusiastically addressed each new development that could enhance his work, learning to fly his own airplane in order to carry out his photogrammetry, and embracing geotechnical engineering when he recognized its importance in water resource engineering and irrigation.

His enthusiasm and energy propelled his firm from its start as a single person to partnership in a worldwide firm that today numbers more than 3,000 employees.

Next: Nicholas J. Hoff »
Memorial Tributes: Volume 10 Get This Book
×