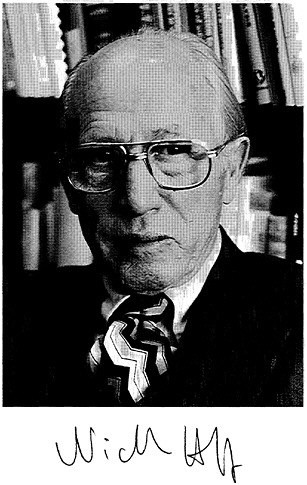 NICHOLAS J. HOFF, professor emeritus and former chairman, of the Department of Aeronautics and Astronautics at Stanford University, died at his home on the Stanford campus on August 4, 1997.

Nicholas was born in the small town of Magyarovar in western Hungary on January 3, 1906. At the start of the First World War, his father, a prosperous dentist, moved the family to Budapest. There Nicholas completed his secondary education at the same Evangelikus Gimnazium as Eugene Wigner, Leo Szilard, and John von Neumann. At this time he was an accomplished violinist and seriously contemplated a career in music. However, his interest in sports, especially in skiing and gliding, led him to engineering, which he studied under Aurel Stodola at the Swiss Federal Institute of Technology in Zurich.

After graduation Nicholas obtained a position at the only Hungarian airplane company at the time, the Weiss Manfred Aeroplane and Motor Works of Budapest. Here, from 1929 to 1939, Nicholas designed training planes and fighters for the Hungarian Air Force, with special interest in the airplanes’ structure. In the late 1930s he contacted Stephen P. Timoshenko and asked if he could work toward a Ph. D. degree under his direction. Timoshenko accepted Nicholas as his student, and Nicholas arrived at Stanford in 1939. After receiving his Ph. D. in 1942,

Nicholas accepted a teaching position at the Polytechnic Institute in Brooklyn. There he undertook theoretical and experimental studies of the stability of monocoque-thin-walled and sandwich structures, and came up with results that are still being used to prevent buckling.

In 1957 Provost Fred Terman invited Nicholas to Stanford to start a department of aeronautical engineering. Under his leadership the department developed into one of the leading centers of aeronautics and astronautics. While at Stanford he continued his research on the stability of thin-walled structures, and in 1966, published his widely acclaimed text Analysis of Struc tures.

After he reached the mandatory retirement age in 1971, Nicholas served as a visiting professor at Rensselaer Polytechnic Institute and lectured widely in Japan, Europe, and Australia. Nicholas kept up a vigorous schedule until just a few months before his death. He swam every day and walked to the department twice a week to consult with colleagues.

Nicholas received virtually every major award in his field, including the Centennial Medal of the American Society of Mechanical Engineers (ASME) as well as the Theodore von Kármán Medal and the Worcester Reed Warner Medal of ASME. He was a recipient of the Daniel Guggenheim Medal of the American Institute of Aeronautics and Astronautics (AIAA), the Von Kármán Lecturer of the AIAA, and the Wilbur Wright Memorial Lecturer of the Royal Aeronautical Society of London. He was elected to the National Academy of Engineering in 1965, the Hungarian Academy of Science, the French Academy of Sciences, the French Academy of Air and Space, and the International Academy of Aeronautics. Nicholas was also active in several engineering societies and was a life member of the American Society of Civil Engineers, honorary fellow of AIAA, and an honorary member of ASME. He was president of the 12th International Congress of Theoretical and Applied Mechanics.

Next: Hoyt C. Hottel »
Memorial Tributes: Volume 10 Get This Book
×