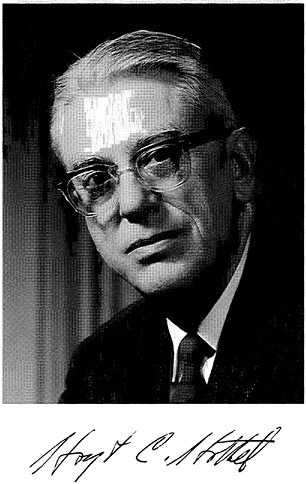 TO THOSE WHO KNEW HIM, HOYT C. HOTTEL will be remembered for his intensity, intellect, and integrity. He would shut out the world as he pursued his activities, and his concentration on the problem at hand would often be mistaken for absentmindedness or aloofness. Few problems could long withstand the sustained assault of his undivided attention. His career in the Department of Chemical Engineering at the Massachusetts Institute of Technology, from 1928 until his death at the age of ninety-five on August 18, 1998, was filled with remarkable accomplishments. His final technical contribution was his narration of the history of the Combustion Institute, of which he was a cofounder, videotaped at his home on July 29, less than three weeks before his death.

He was born to Louis Weaver Hottel and Myrtle Clarke on January 15, 1903, in Salem, Indiana. His family moved shortly thereafter to St. Louis. He liked to recount, as a measure of his longevity, memories of becoming separated from his parents at the 1905 World’s Fair and of watching Halley’s Comet from his backyard in a St. Louis suburb. Having moved to Chicago at the age of ten, he graduated from the Hyde Park High School in 1918. He subsequently attended Indiana University, from which he graduated with a B. A. degree in chemistry in 1922.

Engineering Practice. One of the field stations of the Practice School that he attended, first as student then as an assistant director, was the Lackawanna plant of the Bethlehem Steel Company, where he developed his lifelong interest in furnaces and combustion. He returned to MIT to work on a doctoral thesis on flame propagation under Robert T. Haslam. When Haslam asked him to write up his thesis, Hottel requested that he concentrate instead on the publication of some radiation calculations that he considered to be more important. The paper he published in Industrial and Engineering Chemistry, and then more elaborately in American Institute of Chemical Engineers (AIChE) Trans actions, in 1927 established the basis for the quantitative treatment of radiative heat transfer in furnaces and provided the transition for the treatment of radiation in furnaces from an art to a science. This paper was the first of many digressions from writing his never-to-be-completed doctoral thesis.

Probably the most lasting of his contributions was the development of the gas emissivity charts for quantifying heat transfer in furnaces. The sophistication of his equipment, mostly home built, was extraordinary for any time. He designed and constructed the first infrared spectrometer at MIT and developed such a sensitive radiometer for measuring energy fluxes that the galvanometer would go off scale from the adiabatic temperature rise resulting from the pressure increase when the laboratory door was closed. Measurements could only be made in the still of the early morning on days so calm that the wind would not raise the institute flag. To eliminate interference from the radiation of confining windows, he developed an aerodynamic confinement of the radiating hot gas mixtures. The data that he generated in the 1930s yielded results that provided standards until the present. In addition to measuring gas emissivity, he established the mathematical framework for the quantitative treatment of furnaces and the zone method for furnace heat transfer. He was working on a paper on his one-zone method of analysis of furnaces at the time of his death.

Professor Hottel’s other achievements include early series of studies (1932 to 1936) of heterogeneous combustion, which first identified quantitatively the roles of diffusion and chemical re

action in the combustion of solid carbon. This research again reflected the sophistication of his experimental design, his meticulous attention to precision in gathering data, and his application of scientific reasoning to the interpretation of the results. One paper was reprinted fifty years later by International Commu nications in Heat and Mass Transfer as a classic contribution to the field. Some of the work was expanded by Frank Kamenetsky in his Russian book Diffusion and Heat Transfer in Chemical Kinetics (English publication, 1969). His ability to translate fundamentals to practice was illustrated by his application in 1941 of incorporating his single-particle models in a treatment of pulverized coal flames, which anticipated the computational treatment of pulverized coal flames to be developed three decades later.

His research on gaseous diffusion flames (1939 to 1949) provided a first quantitative treatment of the impact of transition from laminar to turbulent flows on the length of gaseous diffusion flames. As part of that research, he developed jointly with W. R. Hawthorne the concept of unmixedness. His research established the notion of the length of the flame being controlled by the mixing at a molecular level of fuel and air, and treated quantitatively the effect of unmixedness on the lengthening of the flames. These findings have become cornerstones to the understanding of turbulent flame structure.

With funding from Godfrey L. Cabot in 1938, he organized the world’s first research center on the use of solar energy, a few years before the Russian heliocentric center at Tashkent. The studies led to the choice of the flat-plate collector as the most promising device for solar heating, development of the performance-predicting equations in use today for assessing such collectors and for testing new concepts, construction of the first solar-heated house and of three others that provided data for economic assessment of solar space-heating and hot water supply. Simultaneously, Professor Hottel maintained a balanced view of the significance of solar energy in national or world energy use, advocating the separation of emotional from logical inputs to the assessment of the prospects for economic use of the sun as an energy source.

During World War II, he was chief of the National Defense

Research Committee group that studied and developed incendiaries. After the war, he chaired the Armed Forces Special Weapons Panel on Thermal Radiation from 1949 to 1956. Noting that war necessitates the development of technology for ugly purposes, he turned his attention in peacetime to maximizing the contribution of the engineer and scientist to fire prevention and suppression. He was involved in organizing and chaired, for its first eleven years, the National Research Council’s Commission on Physical Sciences, Mathematics, and Resources Panel for Fire Research. He was responsible for stimulating research on the reduction and suppression of peacetime fires and aided the U. S. Bureau of Standards (now the National Institute of Standards and Technology), through congressional testimony, in its successful drive to set up a fire research center.

Professor Hottel was co-founder, with Bernard Lewis and A. J. Nerad, of the Combustion Institute (International), and cofounder, with R. A. Sherman, and chairman for its first twenty-one years, of the American Flame Research Committee, subsidiary to the International Flame Foundation. Professor Hottel was elected a member of the National Academy of Sciences (1963), the National Academy of Engineering (NAE) (1974), and the American Academy of Arts and Sciences. His professional awards include the United States Medal of Merit; King’s Medal for Service in the Cause of Freedom, Great Britain; Founders Award, NAE; Founders Award, AIChE; Fritz Medal, United Engineers Trustees; Sir Alfred Egerton Gold Medal, the Combustion Institute; William H. Walker Award, AIChE; Max Jakob Award, American Society of Mechanical Engineers and AIChE; ESSO Energy Award, Royal Society, London; and Melchett Medal, Institute of Fuel, Great Britain.

He was an inspiring teacher and mentor to students for more than six decades. On the principles of teaching, he said: “Beware that a student’s spirit be not done to death by a formula, by teaching with answers cast in concrete. Be less concerned with technical content and timeliness of what you teach and less concerned with the completeness of coverage of your subject than with stretching the student’s mind and stimulating him to self-teaching, hopefully stretched throughout life. ” He would often

take students home to continue discussions of thesis research, and his wife, Nellie, and his four children gracefully accepted these intrusions. As one of his students recollected, he would look suddenly at his watch and exclaim, “My heavens, it’s half-past six and Nellie will be wondering where I am; you’d better come home with me. ” Later in the evening, “My heavens, it’s half past eleven. You’d better stay here tonight. ”

Away from academia, Professor Hottel took great pride in his extensive vegetable and flower gardens. He was a prodigious and skilled woodworker who built some beautiful hardwood coffee tables and crafted his own Christmas decorations over the years. He also built kayaks for his daughters. One of his proudest achievements was climbing Mount Teton in Wyoming with several younger MIT colleagues when he was fifty years old. He had a strong interest in classical music, and he enjoyed the Boston Symphony regularly for many years with his wife, a singer. He had a nearly perfect ear and could sing any song, using the diatonic scale. He once determined the frequency range of the sound from a research combustor at MIT by telephoning his young daughter at home and asking her to play for him the piano keys sequentially over the telephone.

He was survived by four children: Lois Hottel Wood of Lebanon, New Hampshire; H. Clarke Hottel, Jr. , since deceased, of Mattapoisett, Massachusetts; Barbara Hottel Willis of Severna Park, Maryland; and Elizabeth Hottel Barrett of Annapolis, Maryland; ten grandchildren, and eighteen great grandchildren. He was a giant of twentieth century chemical engineering and leaves a rich legacy in his research output and the large number of students and colleagues, whom he inspired.

Next: George R. Irwin »
Memorial Tributes: Volume 10 Get This Book
×