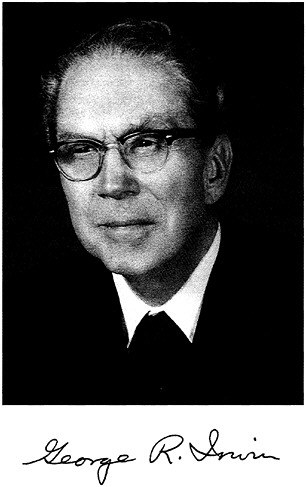 DR. GEORGE R. IRWIN, Glenn L. Martin Professor of Engineering at the University of Maryland and professor emeritus of Lehigh University, died of congestive heart failure at his home in College Park, Maryland, on October 9, 1998. The Father of Fracture Mechanics, he was internationally known for his study of fracture and his ability to convert his scientific concepts into engineering methods applicable to a wide range of industrial applications involving a variety of structural materials.

George was born on February 26, 1907, in El Paso, Texas, son of William Rankin Irwin and Mary Ross Irwin. His family moved to Springfield, Illinois, were he attended and graduated from high school. He attended Knox College in Galesburg, Illinois, and was awarded an A. B. degree in English in 1930. He studied physics for an additional year at Knox College before transferring to the University of Illinois at Urbana. From 1931 to 1935, he was a graduate student and part-time assistant in the Physics Department at the University of Illinois. During this period in 1933, he married Georgia Shearer, who was a classmate from Knox College.

He returned to Knox College as acting assistant professor of physics, teaching there for only one year. The first of their children, Joseph Ross, was born in Galesburg, Illinois, during this year. Returning to the University of Illinois as a service fellow, he completed the requirements for a Ph. D. in 1937. His doctoral thesis was on the mass ratio of lithium isotopes.

In July 1937, George joined the staff of the U. S. Naval Research Laboratory (NRL), Washington, D. C. , to lead a small group of engineers and scientists specializing in ballistics with special emphasis on projectiles penetrating targets. By the time of U. S. involvement in World War II, he had developed a straightforward but exacting technique for measuring penetration force, and its time derivative as a projectile engages a target. He personally conducted a series of penetration experiments using his new method. It was the first time in the long history of ballistics that these fundamental measurements had been made. Although this research was carried on during the war, the important work was not published until 1946 as “Penetration Resistance at Ballistic Speeds” in the Proceedings of the Sixth Congress for Applied Mechanics. The new experimental method enabled the Ballistic Branch at NRL, under George’s direction, to develop several nonmetallic armors that were used for fragmentation protection in the Korean and Vietnam Wars.

George’s interest in brittle fracture was initiated by his observation of armor plate, which chipped and cracked in a brittle manner during proof firings involving thick plates. He noted that this steel appeared to be ductile in standard Charpy impact fracture tests with small specimens. He deduced correctly that rate and size effects changed the mode of failure from ductile to brittle. He was most concerned with the gradient of the stress near a crack tip.

In 1946 George was given the responsibility for the project on brittle fracture at NRL. He changed its direction and focused on the locally concentrated stress and deformation at the crack tip. The fertility and power of this new technical approach soon became apparent. George was promoted from head of the Ballistics Branch of the NRL to associate superintendent of the Mechanics Division in 1948. Two years later, he was promoted to superintendent and served in that capacity until his retirement from government service in 1967.

The classical approach to brittle fracture in the late 1940s had been developed in the early 1920s, following the work of A. A. Griffith. Griffith had shown that an instability criterion could be derived for cracks in brittle materials based on the varia

tion of potential energy of the structure as the crack grew. The Griffith approach was global and could not easily be extended to accommodate structures with finite geometries subjected to various types of loadings. The theory was considered to apply only to a limited class of extremely brittle materials, such as glasses or ceramics. George observed that the fracture process in metals involved nonelastic work at the crack tip. This observation permitted him to modify the Griffith theory by incorporating a plastic work of fracture in addition to the classical surface energy of crack formation.

Confusion was widespread in the literature of that era because it was not clear how a Griffith-style global energy balance related to the local physics of separation processes at the crack tip. George showed definitely in his 1950 papers that the global flux of energy to the fracture process, appearing in that overall balance, was fully explainable in terms of the locally concentrated fields of stress and deformation at the crack tip. Even more important, he showed, in the common case when the zone of nonelastic deformation occupied only a small region surrounding the crack tip, that the mathematical equations of elasticity have singular solutions for the stress fields near the tips of the cracks. These solutions were of a universal form involving a multiplying factor, now termed a “stress intensity factor” proportional to the loading. This stress intensity factor depended on the geometry of the structure and the applied loading. With these pioneering papers of the early 1950s, George had given birth to fracture mechanics.

sity factor. Much of current activity developing nonlinear theory for ductile metals and polymers proceeds in a similar spirit by identifying appropriate characterizing parameters from the near crack tip singular solutions to the nonlinear continuum mechanics equations.

George recognized the huge gap between publication and practice and invested years of persistent effort needed to introduce new fracture mechanics methods to applications in industry. This was a major effort because some of the areas of structural technology had techniques that were not readily replaced. He also provided leadership and significant effort to many of the committees of the American Society for Testing and Materials (ASTM). Many of the standards developed by the ASTM committees for testing materials to establish fracture parameters are due in large part to George’s work over more than two decades.

In 1967, after thirty years of service, George retired from his position as superintendent of the Mechanics Division at NRL and joined Lehigh University as the Boeing University Professor. He served on the faculty at Lehigh University for five years before reaching mandatory retirement age. During this initial period in the academic community, he interacted with many researchers and influenced their work. For example, during his tenure at Lehigh University, he influenced the work of Paul Paris in developing methods for predicting crack growth and its control in aircraft structures and of F. Erdogan on cracks in thin-walled shell structures. The list of others who either collaborated with George or were influenced by him is long. Only a few notable researchers are listed here: A. A. Wells of the British Welding Institute on characterizing fracture in normally ductile steel structures; F. A. McClintock, Massachusetts Institute of Technology, and J. W. Hutchinson, Harvard University, on the development of fracture mechanics procedures in the presence of substantial ductility; Jim Rice, Harvard University, on developing the J integral approach for characterizing the onset of crack growth in ductile materials; L. B. Freund, Brown University, and M. F. Kanninen, Southwest Research Institute, on the dynamics of inertial limited crack propagation and arrest.

After retiring for the second time from Lehigh University in 1972, George joined the faculty at the University of Maryland in College Park. I was then serving as chair of the Mechanical Engineering Department when George decided to join us. We were elated, and he formed the center of a small group, with an experimental focus, working in the area of dynamic fracture. At that time we were concerned with crack arrest and its implications in a loss-of-coolant accident of a nuclear reactor. With his guidance we were able to establish a measure of crack arrest toughness and to develop a test standard for its measurement in tough reactor-grade steels.

The list of honors bestowed on George is long, but they all are worthy of recognition.

George will long be remembered by all of us in the engineering profession as a remarkable engineer and scientist. But I will remember George more as a gentle man than an outstanding

engineer. He had so much character it is impossible to describe. He was never assuming or presumptuous. Many men of achievement become filled with themselves. Not George R. Irwin—he remained humble in spite of his long list of awards and accolades. He sought no glory or legacy. He shared his ideas and was pleased to see others develop his initial concepts. Our research group often gathered in his office to discuss our ongoing work in the dynamics of fracture—I will always remember his quiet ability to keep us on track and to guide us through difficulties. We will sorely miss him.

Next: Burgess H. Jennings »
Memorial Tributes: Volume 10 Get This Book
×