Get This Book
Visit NAP.edu/10766 to get more information about this book, to buy it in print, or to download it as a free PDF.
« Previous: George R. Irwin
Page 154 Share Cite
Suggested Citation:"Burgess H. Jennings." National Academy of Engineering. 2002. Memorial Tributes: Volume 10. Washington, DC: The National Academies Press. doi: 10.17226/10403.
× 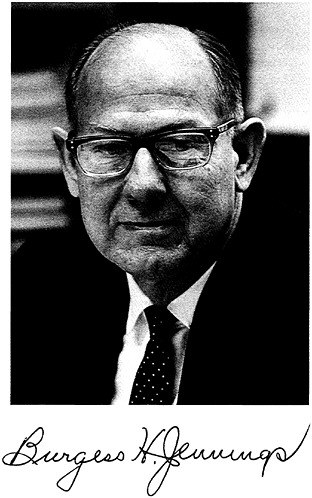 BURGESS HILL JENNINGS, professor emeritus of mechanical engineering at Northwestern University, passed away June 6, 1996, at Raleigh, North Carolina, where he moved after a long and distinguished career in academic research, teaching, and administration. His specialty was environmental engineering, particularly, heating, cooling, and ventilating.

Burgess was born September 12, 1903, in Baltimore, Maryland, the son of Henry Hill and Martha Burgess Jennings. Educated at the Johns Hopkins University and Lehigh University, where he was also a faculty member, he joined the faculty of the new Northwestern Technological Institute in 1940 as professor of mechanical engineering, and in 1943 became chairman of the department. He took leave in 1957 as director of research for the American Society of Heating, Refrigerating, and Air-Conditioning Engineers. He resumed his faculty position at Northwestern University in 1960, taking on the added duties of associate dean of the Technological Institute for Research and Graduate Studies, a position he held until his retirement in 1970. He continued his engineering activities at Northwestern for many years after retirement, consulting for U. S. government agencies, universities, and corporations on energy use, power, environment control, and education.

The outstanding engineering accomplishments of Professor Jennings are evidenced by his authorship of many textbooks not only in heating and air conditioning, refrigeration, and environmental engineering, but also in other areas including steam and gas engineering, internal combustion engines, gas turbines, and gas dynamics. They have made a substantial impact on mechanical engineering education because they have been and are still widely used by engineers and students around the world. A large number of his students are leaders of industry; responsible engineering educators, and administrators. His research and papers on absorption (heat-operated) refrigeration were significant in advancing this type of cooling at a time when compression refrigeration was predominant.

Among many contributions made by Professor Jennings to engineering was the extended consultation service he provided to the kitchens of Sara Lee from 1961 to 1972 in energy use and refrigeration. These efforts led to the development of the technology and practice now associated with the wide distribution of frozen bakery products.

Professor Jennings was extremely active in professional society activities. He served as treasurer, vice-president, president, and director of research of the American Society of Heating, Refrigeration, and Air-Conditioning Engineers (ASHRAE). He was a founder and also served as secretary and then vice-president of the Society of Tribologists and Lubrication Engineers (formerly known as American Society of Lubrication Engineers).

Professor Jennings was elected to the National Academy of Engineering in 1977. He was cited for distinguished contributions to engineering education, research, and practice, and energy use to improve man’s welfare and environment. Burgess received many other awards. He was a fellow and honorary member of the American Society of Mechanical Engineers (ASME). He won the Richards Memorial Award from ASME in 1950 as “the most outstanding mechanical engineer twenty-five years after graduation”; the Worcester Reed Warner Medal of ASME in 1972 for “significant contributions to permanent literature in engineering”; and the F. Paul Anderson Medal of ASHRAE in 1981 “for contributions to energy usage and human welfare. ”

His research contributions were primarily in refrigeration and solar energy as an alternative energy source for cooling as well as heating. He is author or coauthor of more than 100 papers and articles.

Next: Robert A. Laudise »
Memorial Tributes: Volume 10 Get This Book
×