Get This Book
Visit NAP.edu/10766 to get more information about this book, to buy it in print, or to download it as a free PDF.
« Previous: Frederic W. Albaugh
Page 8 Share Cite
Suggested Citation:"Harvey O. Banks." National Academy of Engineering. 2002. Memorial Tributes: Volume 10. Washington, DC: The National Academies Press. doi: 10.17226/10403.
× 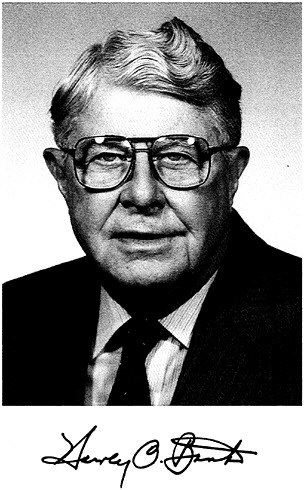 HARVEY OREN BANKS, a world-renowned civil engineer, noted for his work in water resources, died of leukemia at this home in Austin, Texas, on September 21, 1996. He worked as a state engineer and then director of the California Department of Water Resources from 1950 to 1960, and as an engineering consultant on worldwide water-related problems.

Harvey was born on March 29, 1910, in Chaumont, New York. His boyhood was spent on family farms in upstate New York. He received a B. S. degree in civil engineering (magna cum laude) from Syracuse University in 1930. Upon graduating from Syracuse, he went to Stanford University and spent three years (1930 to 1933) as an instructor and a graduate student in civil engineering and there received an M. S. degree in hydraulic and sanitary engineering in 1935. From 1934 to 1935 he worked for the city of Palo Alto, California, as a sanitary engineer and then served as a hydraulic engineer for the U. S. Soil Conservation Service from 1935 to 1938.

In 1938 Harvey started a long and distinguished career with the State of California Water Resources Division (later a department), interspersed with a few other assignments. From 1938 to 1942 he served as an assistant and then associate engineer with the division and then served in the military during World War II (1942 to 1945), serving in the Corps of Engineers. His overseas

service was on Quadacanal. Upon leaving military service in 1945 as a major, he became a partner with Harold Conkling, Consulting Engineer, in Los Angeles. In 1950 he resumed his career with the state of California, serving as a supervisor and principal hydraulic engineer, then as assistant state engineer, and finally in 1955 and 1956 as state engineer. At this time, the new state of California Department of Water Resources was formed and Harvey became its first director. It was during this period that Harvey’s visionary and creative talents were put to use in helping to formulate legislation and the diverse infrastructure that constitutes the California State Water Project. This gigantic system of dams, reservoirs, pumping stations, canals, and pipelines that transport water from northern California to the central and southern sections of California is one of the world’s exemplary water supply and transportation systems, and a great part of its success can be attributed to Harvey’s early leadership in its development.

In 1961 Harvey joined the consulting firm of Leeds, Hill, and Jewett, Inc. , serving as president and chairman of the board until 1969, at which time he formed his own firm. In 1977 he merged his firm with the international engineering firm Camp Dresser and McKee, where he served as president of their Water Resources Division. In 1982 he retired from Camp Dresser and McKee, and again became an individual consulting engineer, and practiced as such for the remainder of his career.

In addition to his service to the state of California in the finalizing of the California Water Plan, Harvey served a wide array of clients, both nationally and internationally while in private practice. One of his major projects was for the Texas Water Development Board on formulating and implementing a long-range water plan for Texas. Another was serving as project director on the 6-State High Plains-Ogallala Aquifer Regional Resources Study (1978 to 1982) for the Economic Development Administration, U. S. Department of Commerce. There were many other projects and programs that he worked on throughout the world, including water resource feasibility studies and multipurpose water basin developments in such countries as Turkey, Bangladesh, Venezuela, Costa Rica, and Iran. Harvey also

chaired state and federal panels throughout the United States and served on international commissions and committees on behalf of organizations such as the World Bank, the United Nations, and the U. S. Agency for International Development. He served as an expert witness before federal and state courts in a variety of cases involving various aspects of water resource control and management.

While accomplishing all of the above, Harvey published extensively on water resources management and water law. His papers were published in the journals and proceedings of the American Society of Civil Engineers (ASCE), the American Water Works Association, the Water Pollution Control Federation, the Institution of Civil Engineers of the United Kingdom, and the California Law Review.

Harvey was preceded in death by his first wife, Mary Morgan Banks, and is survived by his second wife, Jean Ott Williams, and three sons from his first marriage, Robert, Philip, and Kimball.

Harvey Banks was a leader in the water resource field. His work has greatly benefited and improved the quality of life of

many people around the world. For those of us who knew him, he was an inspirational icon of civil engineering, and we greatly miss him.

Next: Melvin L. Baron »
Memorial Tributes: Volume 10 Get This Book
×