Get This Book
Visit NAP.edu/10766 to get more information about this book, to buy it in print, or to download it as a free PDF.
« Previous: Burgess H. Jennings
Page 158 Share Cite
Suggested Citation:"Robert A. Laudise." National Academy of Engineering. 2002. Memorial Tributes: Volume 10. Washington, DC: The National Academies Press. doi: 10.17226/10403.
× 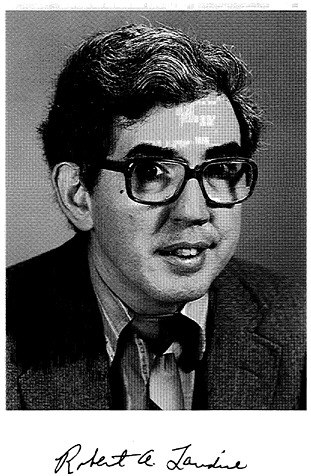 AN ICON FOR CRYSTAL GROWTH TECHNOLOGY and a strong advocate for materials technology in general, Bob Laudise is greatly missed by the community in which he worked, as well as the community of his family and his personal friends. His professional skills created an impressive legacy of technical landmarks as well as some new and permanent institutions. His humanity and gentle humor are irreplaceable in the memories of his colleagues and family members.

I first met him during a visit to Bell Telephone Laboratories. I was a grower of metal crystals; he of oxides. In particular, he was in the midst of developing the hydrothermal process for producing quartz crystals on an industrial scale for use to control the frequencies of electrical oscillators. I was impressed by his intelligence, his enthusiasm for the task at hand, and his pride in what had already been accomplished. Only a few years beyond graduate school, he had accepted responsibility for a difficult task and was executing it with skill. I was delighted later on when he contributed two chapters to a book that I edited, called The Art and Science of Growing Crystals (1963). His own very successful book, The Growth of Single Crystals (1970), was published a few years later.

Robert Laudise was born to Anthony T. Laudise and Harriette E. (O’Neil) in upstate New York in the town of Amsterdam along

the Mohawk River. This was not far upstream from the place where he began his career training in chemistry at Union College in Schenectady, the home base of the General Electric Company at the time. He graduated from Union College in 1952 with a B. Sc. degree and traveled east to the Massachusetts Institute of Technology, where he studied inorganic chemistry and received a Ph. D. degree four years later in 1956.

A major step came next when he was hired by AT&T Bell Laboratories (now part of Lucent Technologies). Unlike many others, he never left, and became highly valued by the management. In fact, he was so highly valued that a special position was made for him toward the end of his career so he was not required to retire when he reached the mandatory retirement age. He was still “in harness” as adjunct chemical director at the time of his death, August 20, 1998.

Starting in 1956 as a member of the technical staff at Bell Laboratories, Robert Laudise rose through the ranks. In 1970 he became the head of the Crystal Chemistry Research Department, followed two years later by a promotion to the position of assistant director and then director of the Materials Research Laboratory. In 1978 he became director of materials and processing research. After he reached the retirement age of sixty-five, he was appointed adjunct chemical director.

The approach of Laudise to crystal growth was systematic. It was that of a careful physical chemist and a disciplined chemical engineer. This was essential to the development of an industrial-scale hydrothermal process for making quartz crystals. It was also important for guiding the efforts of his group in developing the workhorse among solid-state lasers, the neodymium yttrium-aluminum garnet (Nd:YAG), and the workhorse of nonlinear optical-frequency converters, lithium niobate crystals.

His responsibilities were not limited to crystal growth, his first love, but included other aspects of the synthesis of new materials. A significant example is his supervision of the development of processes for the production of optical fibers on a commercial scale.

Robert Laudise was a tireless advocate of the technology of crystal growth as a free-standing discipline—in other words, a

branch of chemical engineering. He used both social organizations and publications to promote his advocacy.

Together with Kenneth A. Jackson, he started the American Association for Crystal Growth (AACG) and worked hard to build it into a stable and effective nationwide organization. As a member of the New Jersey Chapter, I attended a number of the local meetings, spoke before one or two of them, and read the AACG Newsletter with interest for several years. Later, this organization combined with a group of European crystal growers to become the International Organization of Crystal Growth, the IOCG.

In the words of Kenneth Jackson, “One of the prime motivations for starting the AACG, in addition to establishing a forum where we could assemble to interchange our news and views on the subject, was to promote crystal growth and to provide an identity for our field. In this, Bob had a special talent, and he was effective and successful at improving our image in the scientific community and the world at large. ”

After the Journal of Crystal Growth began publication in 1967 under the founding editor, M. Scheiber, Laudise became one of the editors in 1974 and continued in that capacity, or as an adviser, until 1998.

As his career progressed, Robert Laudise’s professional interests broadened. The group of people under his supervision worked on an increasingly large variety of materials, using a great variety of techniques. The properties they were interested in were primarily electronic and optical. The scope did not include metallic, polymeric, or other structural crystals, but within the scope there was great variety.

As a spokesman for crystal growth and the behavior of materials more generally, Laudise was an active participant in the pertinent professional societies both as a member and in various officiating positions. He was a past president of the American Association for Crystal Growth as well as the International Organization of Crystal Growth. In addition he was a past chairman of the Solid State Chemistry Subdivision of the American Chemical Society. The American Association for the Advancement of Science elected him as a fellow, as did the American

Many people receive prizes for their professional work, but few have prizes named for them. In the present case, the International Organization of Crystal Growth established the Laudise Prize in 1989. Other prizes awarded to Robert Laudise were the Sawyer Prize, 1976; A. D. Little Fellow (MIT), 1976; IOCG Crystal Growth Prize, 1984; Industrial Research Magazine’s IR-100, 1989; American Chemical Society’s Materials Chemistry Prize, 1990; Orton Award of the American Ceramic Society, 1994; Applications to Practice Award of the Materials Society, 1995; 200th Anniversary Medal of Union College, 1995; Past President’s Award of the Federation of Materials Societies, 1998; and the Eitel Award for Excellence in Silicate Science from the American Ceramics Society, 1996. Robert Laudise was elected to the National Academy of Engineering in 1980 and to the National Academy of Sciences in 1991.

Many advisory committees benefited from Laudise’s expertise. Some of the committees he advised, together with some of his other professional activities, were as follows:

Influences of technological activities on environments, and ecologies, became a major interest of Robert Laudise in the latter part of his career. He was active in encouraging AT&T to establish Industrial Ecology Faculty Fellowships, a grant to develop the Journal of Industrial Ecology, and conferences on industrial ecology. These conferences allowed practitioners to meet to exchange knowledge and engage in policy discussions. He believed that well-implemented industrial ecology should pay for itself and provide competitive advantage to those practicing it.

Next: Hans List »
Memorial Tributes: Volume 10 Get This Book
×