Get This Book
Visit NAP.edu/10766 to get more information about this book, to buy it in print, or to download it as a free PDF.
« Previous: Robert A. Laudise
Page 164 Share Cite
Suggested Citation:"Hans List." National Academy of Engineering. 2002. Memorial Tributes: Volume 10. Washington, DC: The National Academies Press. doi: 10.17226/10403.
× 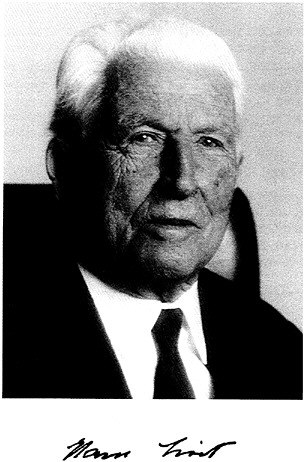 IN SEPTEMBER OF 1996, DR. HANS LIST, elected as a foreign associate of the National Academy of Engineering in 1989, died at age 100. At the time of his passing, he was the only member of the Academy of that mature age. Dr. List was born on April 30, 1896, in the year when Rudolf Diesel presented his plans for a new internal combustion engine that was then named after him.

As a boy Hans List showed a great promise as a musician and could easily have pursued a career in music as an accomplished artist on both the piano and the cello. His technical instincts, however, were far too strong and he gave up a promising career in music to pursue engineering and science.

While working on new diesel engine technology in the Johann Weitzer Wagon and Machine factory, List wrote his doctoral dissertation on “The Regulation of Diesel Engines. ” It was quite unusual in those days that someone would write a thesis without academic supervision, especially since he had used mathematical methods that could not be verified with a slide rule. His thesis had to be given to a very strict mathematician but was approved with excellent results. It was rather typical for Hans List that one day in 1924, he asked his parents to come to a ceremony at the Technical University in which, to his parents’ surprise, he was awarded a Ph. D.

In the late 1920s, List saw an ad in a German technical journal for a lecturer in internal combustion engines at a Chinese university. He applied and shortly moved to China, an adventur

ous undertaking. The Tongji University in Woosung near Shanghai had been founded by Germans, and the language of instruction was German. The engine laboratory was well equipped, and List could conduct a number of experiments and tests. He witnessed the Chinese Civil War, the conflict between the North and South, and the growing tension between China and Japan.

After six years, Hans List was offered a professorship at the Department of Thermodynamics and Internal Combustion Engines at the Technical University of Graz, Austria, and he accepted. During the following years, he worked together with his assistants who later became colleagues in his engineering office on diesel engines and the gasification of solid fuels. During that time he also started work on the publication of a 14-volume standard reference work, The International Combustion Engines. Its updated version is still the basic course book for mechanical engineering students in Europe. His last volume was published in April 1996.

The research facilities in Graz were modest. Therefore, Hans List responded to an invitation to succeed the famous Professor Naegel, an acknowledged master of diesel engine research at the Technical University of Dresden. Apart from teaching, Professor List carried out research on the construction of aircraft engines and published numerous papers. He set up an office in Vilsiburg, Bavaria, and cooperated with well-known companies, such as Daimler-Benz and Bayrische Motorenwerke. After eyewitnessing the horrible air raid that devastated Dresden, Hans List moved to Vilsiburg where he continued his research on piston engines and aircraft turbines.

After World War II, List returned to Graz and founded an engineering office—AVL—together with four of his former colleagues from the Technical University of Graz. He received financial assistance from the Marshall Plan and was able to expand his business. List paid back the Marshall Plan loan in full not many years after starting his company. Few loan recipients did this well. His first big contract with the Jenbacher Werke provided the financial background for the further development of his company. In the years that followed, the rapidly expanding and practice-oriented research institute designed and devel

oped numerous engines for tractors, trains, vessels, and aircraft. Today the company has business relationships with most automobile manufacturers of the world.

In the 1960s Hans List planned and built an engine factory in Egypt. The factory was completed in less than three years and still exists today. A similar concept was developed for a factory in Korea. He continued throughout his career to build international business relationships overseas and in many European countries.

It was clear to Hans List that, in the future, improvements would be necessary and environmental constraints would be placed on engines. One problem was noise, and Professor List set out to find ways to reduce noise. Over the years, AVL branched out into other important fields: instrumentation and engine testing. Today AVL is not only a leader in engine testing and engine test equipment, but has also specialized in the field of medical instruments. Ninety-eight percent of AVL equipment is produced for export. To comply with the ever-increasing environmental requirements, AVL has concentrated its work on meeting the strictest emission requirements and has become a highly regarded specialist in this field.

Hans List managed his privately owned research institute for many years, and in 1979 handed over management to his son, Helmut. He had visions of the future throughout his life and was able to realize many of his ideas. He was an example to his staff for living what he said and thought and was an example of self-discipline and willpower. Even at the age of 100, he came to his office daily, climbed the stairs to the second floor, and spent his days thinking of how to improve the diesel engine, a model of which he kept on his desk. He registered his latest patent at age ninety-eight, a record that was entered in the Guinness Book of Records. Dr. List was awarded an astonishing 364 patents.

Hans List set an example by establishing a business in the second half of his life, at an age when many people can think only of retirement. Those who spoke of him did so in respectful, admiring terms. Attendees to the company ball held in his honor on June 14, 1996, were impressed when he opened the gala waltzing with Kathryn Millar List, his daughter-in-law.

Next: Harvard Lomax »
Memorial Tributes: Volume 10 Get This Book
×