Get This Book
Visit NAP.edu/10766 to get more information about this book, to buy it in print, or to download it as a free PDF.
« Previous: Hans List
Page 168 Share Cite
Suggested Citation:"Harvard Lomax." National Academy of Engineering. 2002. Memorial Tributes: Volume 10. Washington, DC: The National Academies Press. doi: 10.17226/10403.
× 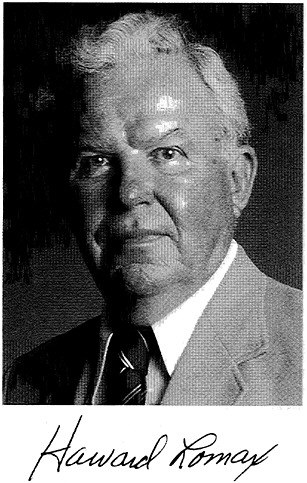 HARVARD LOMAX, a research fellow and senior staff scientist at the National Aeronautics and Space Administration (NASA) Ames Research Center and consulting professor at Stanford University, died on May 1, 1999. He was a gentle and quiet man who provided many significant advances in aerodynamics and fluid mechanics through his deep knowledge of mathematics and computers, his remarkable inventiveness, his dogged diligence, and his persuasive technical leadership.

Harvard was born in Broken Bow, Nebraska, on April 18, 1922. In 1940, when he had graduated from high school, his aunt, Edith Stephenson, encouraged him to move to California, which he did. For a while he made her San Francisco home his California headquarters. She encouraged his study at Stanford, where he thought he might become a writer. She was more practical and realized his talent was in mathematics. Soon he was studying mechanical engineering at Stanford. While there, he met Joan Whitmore, who received her degree in social science and psychology. They were married December 31, 1943. With a subsequent master’s degree in music, Joan taught both piano and music at DeAnza College, where she conducted the senior citizen chorus for over twenty years. They had three children, Harvard Laird (1945), James Whitmore (1948), and Melinda (1959).

Graduating from Stanford Phi Beta Kappa in mechanical engineering in 1944, Harvard was soon in the U. S. Navy and assigned to Moffett Field as an engineer. The only course he had found difficult at Stanford was machine shop. Nevertheless, the Navy made him a research scientist in a 16-foot high-speed (for that time, but less than Mach 1) wind tunnel. His theoretical ability soon made it evident that Harvard should join the National Advisory Committee on Aeronautics Ames Theoretical Aerodynamics Branch under Dr. Max Heaslet. In this branch, Harvard soon made many important contributions, including a little-known but extraordinarily informative derivation of the supersonic area rule [NACA RM A55A18]. He understood the hyperbolic equivalent of the Green’s function for elliptic equations, i. e. , Riemann function, which he used to derive the supersonic area rule. This derivation made it clear how to separate wave drag due to lift from that due to volume, and thereby how to minimize the wave drag for a given lift and volume (or maximum cross-sectional area). Subsequently, Harvard’s results were widely used throughout the industry. This culminated almost twenty-five years of theoretical aerodynamics research, which for most would be a career in itself. But Harvard’s career was far from over. The age of the “numerical wind tunnel” was on the horizon, and Harvard was among the first to see its potential.

In 1958 the NACA became NASA with both aeronautics and space in its charter. In an effort to speed up the reduction of data from their wind tunnels, NASA Ames arranged for the purchase of its first computers in the late 1950s. This attracted Harvard’s attention, and he soon learned machine language to be able to evaluate the results from his theories. The Theoretical Aerodynamics Branch was subsequently used to educate others at Ames, by their rotation through this branch, in the use of computers and computational methods.

With the arrival of transistorized computers and FORTRAN, Harvard began a long career devoted to the development of computer methods for the solution of aerodynamic problems. Hans Mark, NASA Ames, and Dean Chapman, division chief for thermo- and gas-dynamics, wisely decided to form a Computational Fluid Dynamics (CFD) Branch with Harvard as its chief,

and with Robert MacCormack as assistant chief. This talented group made rapid advances with the arrival of a CDC 7600 in early 1970s. In 1972 the Illiac IV arrived. This was the first serious parallel computer. Despite this group’s talent and Harvard’s own diligence, it took nearly four years to make the Illiac IV operational.

To allow Harvard’s CFD group to focus on the fundamentals of the computational methods, as well as on improving computing speed, a new branch was formed for Applied Computational Aerodynamics. This focus on the fundamental issue of “getting the physics right,” which is most difficult in turbulent flows, continues to pay handsome dividends even today in our growing knowledge of turbulent flows through the joint NASA Ames-Stanford Center for Turbulence Research.

Despite their struggles with the Illiac IV, the branch, and soon the center were focused on procuring a special-purpose computer for fluid dynamic flows. This they called the Numerical Aerodynamic Simulator Program (NASP). In the formative stages of the NASP, a group of us advised the Ames management that everything about NASP seemed sound, except the program should purchase the best available computers for its needs, rather than trying to have a special-purpose computer developed for them. Whether this advice was correct is not known, but NASP, with Harvard as it father, became the Numerical Aerodynamic Simulator Facility.

This facility made many important contributions to computer technology, computational methods, and the simulation of aerodynamic propulsive flows. It provided an ever-improving “numerical wind tunnel” and made many important contributions to aerodynamic and propulsion technology for commercial and military aircraft. It was Harvard Lomax who not only saw that this could be, but in large measure was personally responsible for making it happen.

Among the many awards Harvard received were the NASA Medal for Exceptional Scientific Achievement in 1973, the American Institute of Aeronautics and Astronautics (AIAA) Fluid and Plasma-Dynamics Award in 1977, and the Presidential Rank Award for Meritorious Executive Service in 1983. He was elected

an AIAA fellow in 1978 and a member of the National Academy of Engineering in 1987. He received the Prandtl Ring in 1996.

All who knew Harvard admired his gentle ways, his extraordinary mathematical talents, his kind humor, and his quiet but effective leadership. This “gentle giant” is sorely missed.

Next: Albert G. Mumma »
Memorial Tributes: Volume 10 Get This Book
×