Get This Book
Visit NAP.edu/10766 to get more information about this book, to buy it in print, or to download it as a free PDF.
« Previous: Harvard Lomax
Page 174 Share Cite
Suggested Citation:"Albert G. Mumma." National Academy of Engineering. 2002. Memorial Tributes: Volume 10. Washington, DC: The National Academies Press. doi: 10.17226/10403.
× 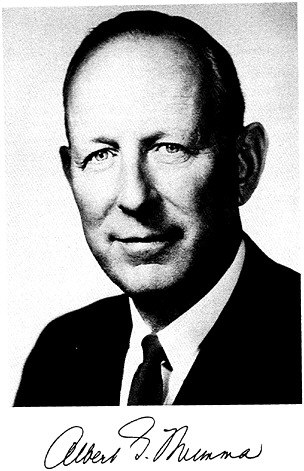 Admiral Mumma was born on June 2, 1906, in Findlay, Ohio. He was a member of a family with an outstanding military tradition. His father, Colonel Morton G. Mumma, was a graduate of the U. S. Military Academy, class of 1900. His two brothers, Rear Admiral Morton C. Mumma, Jr. , and Major George E. Mumma, were both graduates of the Naval Academy.

Admiral Mumma received his early education at Army posts in Iowa, Texas, the Philippines, and Washington, D. C. After graduation from Iowa High School in Iowa City in 1922, he entered the U. S. Naval Academy with a congressional appointment from Iowa.

He was a member of the rifle team and also a midshipman battalion officer while at Annapolis. He graduated with distinction, eighteenth in a class of 456. He also received the award established by the class of 1924 for highest standing in the graduating class for the course in the Department of Engineering and Aeronautics. During 1932 to 1934 he continued his education with a course in naval engineering at the Naval Postgraduate School of the Naval Academy. He also attended the L’Ecole d’Application du Genie Maritime in Paris from 1934 to 1936.

Sea duty during his early naval career included service aboard the USS Richmond; the USS Seattle, flagship of the United States fleet, in 1927; and the USS Saratoga, the first U. S. carrier, during her fitting-out period and later commissioning until June 1931. In 1936, on completion of his studies, he was assigned the post of chief engineer of a new destroyer leader, the USS Clark (DD361).

During World War II he served on the staff of the commander of Naval forces in Europe and also the Alsos Mission (European technical intelligence) mostly in France with the Army. It was in connection with this work that he headed the technical group visiting the headquarters of Admiral Doenitz at Flensburg and Glucksburg, Germany, just before VE-Day. This activity secured Dr. Helmuth Walter and his coworkers, who had been involved in a number of weapon systems for the Germans. This was the start of the extensive evaluation of the technology of the German wartime projects.

He returned to the United States after the war and in December 1945 became deputy director of ship design for the Bureau of Ships, Navy Department. He was also designated as deputy coordinator of nuclear matters and head of the Nuclear Ship Propulsion Program until 1948. He was production officer at the San Francisco Naval Shipyard from 1949 to 1951. He was promoted to rear admiral in 1954 and commanded the Mare Island Naval Shipyard, which was being converted to nuclear-powered submarine construction. Finally, he became chief of the Bureau of Ships in 1955. This was the period of rapid conversion to nuclear power plants for naval ships and a time of great change.

In June 1959, immediately after his retirement from the United States Navy, he joined Worthington Corporation as vice-president of engineering. In 1962 he was elected to the board of directors. He was rapidly promoted to executive vice-president in 1964 and president in April 1967. In November 1967, he was elected chairman of the Worthington Corporation. He served in this capacity until retirement in July 1971.

dent and fellow of the Society of Naval Architects and Marine Engineers. He received the Admiral Jerry Land Gold Medal given by the latter society for contributions to naval architecture. He was elected to the National Academy of Engineering in 1976 and served on several committees of the National Research Council. He held the degree of honorary doctor of engineering, awarded by Newark College of Engineering. In 1971 he was appointed by President Nixon to chair the American Shipbuilding Commission to study and report on measures to improve the shipbuilding posture of the U. S. Navy and the Merchant Marine. This task involved considerable interaction with the civilian and military leadership of the Navy. In addition to receiving a number of U. S. decorations, he was knighted by the Queen of the Netherlands and holds the Order of Knight Grand Officer of Orange Nassau.

Admiral Mumma was a director of a number of financial and industrial organizations. Chief among them were directorships in the Prudential Insurance Company of America, the C. R. Bard Corporation, and Kueffel and Esser Company. He was also active in community service, particularly education. He served as a trustee of the Webb Institute of Naval Architecture, Drew University, and the St. Barnabas Hospital in Livingston, New Jersey.

Admiral Mumma served his country well through his note-worthy career in the U. S. Navy and his work in guiding the activities of the American Shipbuilding Commission. In addition to being a knowledgeable leader and colleague, he was also a pleasure to work with.

Next: Ryoichi Nakagawa »
Memorial Tributes: Volume 10 Get This Book
×